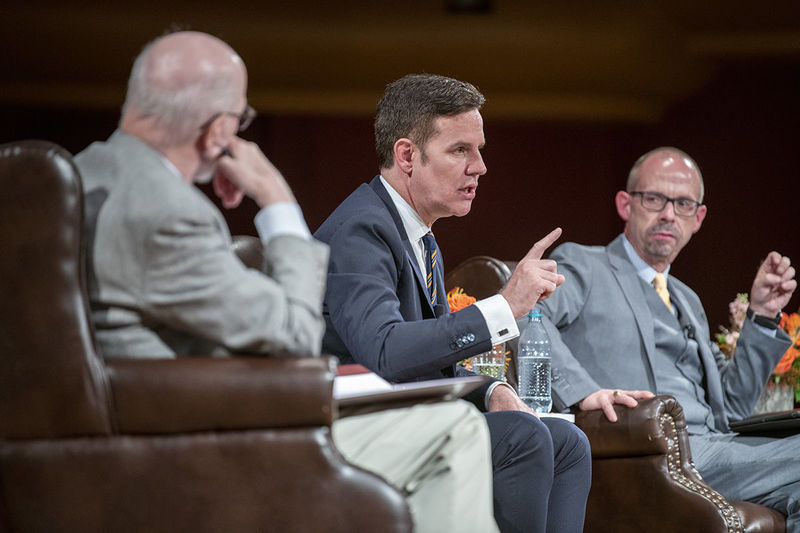 Juan Carlos Cruz, a survivor of childhood sexual abuse by a parish priest in his native Chile, remains a practicing Roman Catholic.

Cruz was abused as a child by Fernando Karadima, a notorious Chilean priest defrocked after numerous allegations of sexual abuse. Cruz’s personal story was initially dismissed by Pope Francis, but the pontiff apologized to him during a one-on-one meeting in April 2018. Francis formally removed Karadima — whom the Vatican had found guilty of the abuse of minors in 2011, forcing him into retirement — from the priesthood the following September.

Cruz noted his own ties to Notre Dame, saying he attended a Congregation of Holy Cross school in Chile and later spent some time as a seminarian at Moreau Seminary, where he found some solace and healing.

Drawing on the experiences of a panel of experts, the University in the fall began a year-long conversation titled ‘Rebuild My Church’: Crisis and Response that is aimed at identifying reforms in the wake of the clergy sexual abuse crisis and charting a path forward for the Catholic Church. The panelists for the initial Notre Dame Forum event included Cruz, a victim and activist; Archbishop William E. Lori of Baltimore; Kathleen McChesney, a former FBI executive assistant director who helped create the United States Conference of Catholic Bishops’ “Charter for the Protection of Children and Young People”; and journalist Peter Steinfels, who has written for Commonweal since 1964. The event was moderated by John L. Allen Jr., editor of Crux, a news website that covers the Vatican and the worldwide Church.

While the handling of the crisis appears to be improving in the U.S., abuse “hasn’t gone down in the world,” Cruz said. “It’s getting worse.” At times throughout the panel discussion, he spoke directly to other victims, saying at one point, “There’s so many people that are waiting to lend you a hand, to help you through that horrible pain.”

McChesney predicted the Church will continue to be slow to change. She said seminaries sometimes emphasize the wrong things when it comes to priests-in-training. “Selection is more important than formation,” she said. “You can have the best seminaries in the world, but if you select the wrong person to go into the seminary that person will never become a healthy cleric.”

“It’s one thing to have policies and procedures in place. It’s another thing to live them,” said Lori, who said he’s been meeting with abuse victims since 1994. “You learn to put the victim-survivor in the driver’s seat. It’s a question of listening, listening deeply and believing them.”

Steinfels said not many people are aware of the precipitous drop in the number of Church-related sex abuse cases reported since the 1980s and ’90s, and was pointed in his criticism of the grand jury investigation into abuse claims in six Pennsylvania dioceses, which produced a high-profile report in August 2018.

“Suppose that the current horrid rates of death by gun violence or by opioid overdose declined, like Catholic clergy sex abuse cases, by almost 97 percent. Would we pretend that nothing significant had happened?” Steinfels asked. “Anyone who obscures this dramatic drop in Catholic clergy abuse, as I think the Pennsylvania grand jury report did, is simply not telling the truth.” He called for the creation of a comprehensive archive of the crisis, including documents and oral histories, to bring about a deeper understanding of the problem.

At a forum event in November, Archbishop Charles Scicluna of Malta said the crisis will never be solved without the active involvement of lay people and a willingness to listen to victim survivors. In addition to his leadership of the Church in the tiny Mediterranean island nation, Scicluna is adjunct secretary of the Congregation for the Doctrine of the Faith, the church body responsible for investigating abuse cases involving minors.

“We need to empower our community. Our community needs to learn how to protect itself,” he said, arguing that the American bishops’ charter, first released in 2002, wasn’t comprehensive enough in addressing clerical sexual abuse because it didn’t cover the bishops themselves. He mentioned a new church law established in 2019 by Pope Francis that requires all priests — including bishops — and religious to report clergy sexual abuse and cover-ups to their superiors.

The problem of sexual abuse is everyone’s concern, he told the audience. “Ask what you are going to do to be part of the solution,” he said.

A student asked Scicluna for advice on how young Catholics should address scrutiny from their non-Catholic friends regarding the scandal and the Church’s credibility. “Humility, I would say,” the archbishop responded. “We have to own up to abuse where it has occurred. Not to deny it, as that would hurt us.”