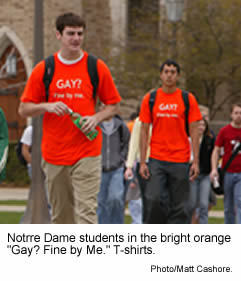 Visitors to campus March 18, 2004, would have had a hard time believing Notre Dame has a reputation for being unwelcoming to gay people. Hundreds of students and employees that day could be seen wearing bright orange T-shirts reading “Gay? Fine by Me.”

An unofficial student group called the Gay-Straight Alliance said it sold about 1,600 of the shirts and encouraged people to wear them March 18 and thereafter as a sign of solidarity between gay and straight members of the campus community. The event was modeled on a concept born at Duke University. A second unity day was held April 21.

Participation in the events appeared motivated at least in part by last year’s Princeton Review guide to the nation’s Best 331 Colleges listing Notre Dame No. 1 in a category labeled “Alternative Lifestyles Not an Alternative.” Ratings in the wide-ranging and widely read guide are said to be based on poll responses of students attending the colleges rated.

Acceptance of homosexuality has been a topic of widespread discussion and sometime protest at Notre Dame for nearly two decades. Two issues have dominated the debate.

One is whether the University should grant official recognition to a gay-lesbian student organization. Recognition would make such a group eligible to receive money for programming and allow it to advertise its meetings and events on campus. (Organizers of the T-shirt days were able to advertise by convincing two academic units, the departments of anthropology and sociology, to lend their names to the materials.)

In deciding against recognition, the University has insisted that the issue is complex and requires collaboration among administrators, pastoral ministers and students. Today’s administrators point to resources already in place that are intended to support students and heighten awareness. The most prominent of these resources is the Standing Committee on Gay and Lesbian Student Needs, part of the Office of Student Affairs. And although the University has not approved a student club, despite numerous requests, an unrecognized organization has existed for many years.

The other issue is whether the University should amend its legal statement of non-discrimination to include sexual orientation alongside characteristics like race, color, gender, and national and ethnic origin. While condemning harassment of any kind, the University’s Board of Fellows, Board of Trustees, and officers have declined to make this change because of concern that a court might not understand the distinction the Catholic church draws between sexual orientation and sexual conduct. Church teaching holds that a homosexual orientation is neither sinful nor evil but that sexual union is reserved exclusively to a man and woman joined in marriage. If sexual orientation were named as a protected category in the non-discrimination clause, the argument goes, civil courts could measure the University’s decisions in this regard, potentially jeopardizing Notre Dame’s ability to make choices that support teachings of the church.

The first gay group to seek recognition at Notre Dame was Gays and Lesbians of Notre Dame and Saint Mary’s College, which applied for and was denied recognition in 1985. In the following years GLND/SMC, originally composed mostly of graduate students, continued to meet regularly in the University Counseling Center. The group was allowed to advertise in The Observer, but the ads could not include the name of the organization or specify the meeting place.

In late 1994, GNLD/SMC decided to challenge these restrictions by deliberately advertising the place of its next meeting. The group was soon banned from meeting anywhere on campus, sparking protests that drew wide press coverage.

In 1995 then-Vice President for Student Affairs Patricia O’Hara formed a committee of students, faculty and administrators to look for ways to address the concerns of homosexual students short of granting official recognition to GLND/SMC. A year later this committee made 12 recommendations, 11 of which were accepted by the vice president.

The recommendations included establishing an in-house group to provide support for gay and lesbian students, with advisers appointed by Student Affairs. The measures also created the Standing Committee on Gay and Lesbian Student Needs. Although student interest in the support group waned, the Standing Committee continues to serve as the primary vehicle for the University’s education and outreach efforts.

The 12th recommendation of the 1995-96 committee concerned amending the non-discrimination clause. In 1997 Father Edward Malloy, CSC, University president, published a letter to the campus announcing his decision to let the existing wording stand and explaining his reasons for doing so. He issued a new policy statement, the “Spirit of Inclusion,” stating that the University welcomed people of all kinds, including those of different sexual orientations, and that Notre Dame condemned harassment of any kind.

Two years later, advocates of amending the non-discrimination clause tried going over Malloy’s head by asking the boards of trustees and fellows to make the change. Both bodies declined to do so.

Later in 1999 a new controversy erupted when The Observer published an ad from the unofficial group Gay and Lesbian Alumni/ae of Notre Dame and Saint Mary’s College. Printed in the student paper’s final issues of the year, the ad congratulated any gay, lesbian, bisexual and transgender students on graduating and invited them to join the organization.

A representative of Father Malloy warned that the paper was not allowed to carry ads from outside groups that espoused positions contrary to the Catholic church.

Later, in the fall of 1999, the paper published an ad from OutreachND. This successor to GLND/SMC developed in the mid-1990s and is described as being oriented more toward undergraduate students than was the original organization.

No serious repercussions resulted from the _Observer_’s acts of defiance, and a spirit of live-and-let-live appears to have prevailed. OutreachND continues to meet on campus and even advertise occasionally in the student paper. But neither it nor any other gay-related student group has succeeded in winning formal recognition.

The latest to try was the T-shirt effort’s organizer, the Gay-Straight Alliance. In March the administration turned down this group’s request to form a new group with the proposed name United in Diversity. Unlike OutreachND, which is primarily a support group for gay and lesbian students, United in Diversity said it would be open to gays and straights alike and would focus its efforts on changing the campus atmosphere. One of the group’s leaders, Joe Dickmann, a senior this past year, said in February that he had received e-mails from “600 to 700” students expressing support for the concept.

In denying the Gay-Straight Alliance’s application for recognition, the University again said it already has programs and structures in place to support gay and lesbian students and to educate and sensitize the campus community about issues related to homosexuality.

Ed Cohen is an associate editor of this magazine.