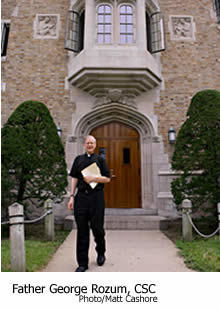 Imagine you’re allergic to dust and mold and need 10 hours of sleep every night. For some strange reason you’ve been appointed resident director in a men’s college dormitory. You wouldn’t last a week, right?

Wrong. Father George Rozum, CSC, ‘63, ’80M.S., has lasted 27 years as the abundantly allergic, sleep-dependent rector of Notre Dame’s Alumni Hall. With the start of the academic year he broke the record for longest tenure in charge of the same dorm.

“I thought I’d try it for a year,” the soft-spoken 66-year-old recalls of when he took the job in 1978. He insists that he’s always felt inadequate for the position because he’s never been able to get to know the hall’s 269 residents (the capacity was 289 when he started) as well as he thinks he should.

Originally from Mitchell, South Dakota, Rozum came to Notre Dame after eight years serving in a parish in Austin, Texas. He says the climate there took a heavy toll on his health, as he discovered he was allergic to, among other things, grass, trees, dust and mold. He was particularly plagued by the pollen from cedar trees, which seemed to follow him around like a yellow cloud.

After a year’s sabbatical at Moreau Seminary to recover his health, he became assistant rector in Holy Cross Hall (now demolished). The following year he was put in charge of venerable Alumni, which, along with Dillon Hall, celebrates its 75th anniversary this year.

Rozum says during the school year he gets his requisite sleep between the hours of 2:30 a.m. and noon or 12:30 p.m. “I could go to bed earlier, but I need to be up when they’re (students) up.” He makes the astonishing claim that “They’re pretty quiet here.” Only occasionally does he have to resort to ear plugs and usually only in the morning when students head off to classes.

Before this year the record for continuous service as rector of one dorm belonged to the legendary Father Matt Miceli, CSC, ’47, who headed Cavanaugh Hall from 1963 to 1990. Miceli is believed to still hold the record for longest total service as a rector. He was in charge of Stanford Hall for three years before Cavanaugh.

Miceli says that if someone was going to break his longest-heading-the-same-dorm record he’s happy it was Rozum. “I like George. He is an old-fashioned type of rector, the type who believes the dorm is his building. He does all kinds of things for his building.”

Miceli has kidded his friend, however, that the new record should come with an asterisk. That’s because he, Miceli, taught a full load of theology classes while he was a rector and Rozum has never taught.

Rozum is reluctant to single out particular students as the most memorable from the thousands who have passed through Alumni. As for the scariest moments he’s had as rector, he says, they have all been the same.

“Every year you’ll have two or three who drink too much and maybe have to take them to the hospital or sit with them through the night and hope it will be all right. And it always has been. They don’t understand that alcohol is real. After that they don’t generally have a problem again.”

He says he plans to continue as rector as long as his health holds. Asked what advice he would give to his eventual successor, he says it would be same he was given by Father Greg Green, CSC, ’58, now staff chaplain for Student Affairs, when Green put him in charge:

“‘Love them well.’ I think that’s the most important thing.”