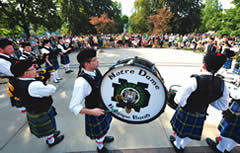 Dan Gezelter played trumpet as a kid, but made the switch to bagpipes in high school. “I wasn’t getting beaten up enough,” the associate professor of chemistry says.

Gezelter put his pipes away for years until a student suggested he come play for the Notre Dame Bagpipe Band. Soon he found himself marching around campus in a kilt on football Saturdays alongside Dominic Vachon, an adjunct professor of psychology, and a handful of piping and drumming students, many of whom had been playing less than a year.

If the Notre Dame Marching Band is the pregame festival, the Pipers of the Fighting Irish are the fringe — the unofficial but committed upstarts who have made themselves a beloved part of the jubilant thunder that comprises a home football weekend. Midmorning Saturday, the band blasts powerful renditions of the “Victory March” and the “Irish Jig” in front of the Main Building, the kickoff of its pre-game routine.

Before the typically cooler home games in November the band takes its act under the Dome. Bagpipes don’t do well in the cold — ironic for an instrument native to Scotland, Gezelter notes. It happens that the Main Building is a “fantastic place to play,” though Gezelter admits they were kicked out once by the Admissions Office.

Bagpipes were the business of the original Irish Guard and the Marching Band in the 1950s, but problems quickly emerged. The chill air of late fall condensed on the reeds, killing the sound. Plus, the relatively small number of Guards made even an instrument “best heard at a distance, somewhere between 1 and 100 miles” hard to pick up in the roar of Notre Dame Stadium.

Thus the pipes were down at Notre Dame until Paul Harren ’91 formed a band for his senior year. Successive student pipe and drum majors have helped it thrive ever since. They built a club budget, acquired pipes and uniforms complete with special shoes called ghillie brogues (though permission to wear kilts woven in the Guard’s tightly protected Notre Dame tartan was slow in coming) and trained a generation of novice pipers, many of whom are prepared to rouse the spirits of Irish fandom after only a year of group lessons and practice.

Sometimes an expert shows up, such as student Taylor Blachley, who took charge of the group in his sophomore year and offered younger musicians effective instruction. “I set up this and that; I yell at people,” says Blachley, a ND senior, Pittsburgh native and third-year pipe major who began playing with his grandfather at age 8. Within a few years he was marching down Edinburgh’s Royal Mile with MacDonald’s Pipe Band and eating a piece of birthday cake in the home of the Earl of Elgin and Kincardine, the head of the Bruces, Blachley’s clan.

Last year, he says, 64 students signed up to pipe, but by spring only three were still coming to the free group lessons. Even at that rate the band is growing. Most members practice the club-owned pipes in their dorm rooms and take them home for the summer, a boon for college students since a quality set may cost upward of $1,000. Blachley also offers private lessons for half the price he pays when he takes advanced lessons from master pipers.

Bagpipes are found in many cultures, but there’s nothing Irish about the Highland pipes the ND band plays. They’re originally instruments of war, Gezelter says, meant to “scare the clan across the way,” which of course makes them perfect for tailgaters, men’s and women’s basketball games and the band’s annual gig at a football pep rally in the JACC. Tennessee fans once requested their fight song, “Rocky Top.” The pipers gave them the “Victory March.”

Blachley says the biggest crowd pleaser is the “Irish Jig.” They play other standards en route through LaFortune, along South Quad to the Knights of Columbus building and once around the stadium, and they mix in such personal favorites as “Glasgow City Police Pipers,” another fast tune. Just don’t ask them to play “Danny Boy.” The song’s range is too big for the pipes. “It’s playable,” Gezelter warns, “but it just sounds weird.”

John Nagy is an associate editor of Notre Dame Magazine.
Photo of bagpipers by Matt Cashore.