Brother Lawrence Unfried, CSC, ’65, ’69M.S. has taught science at Holy Cross College in South Bend for more than 40 years. Last semester, he taught at the Westville Correctional Facility, hauling fruit flies and seeds on a weekly 100-mile round trip to oversee what is apparently the only prison science lab of its kind in the United States. 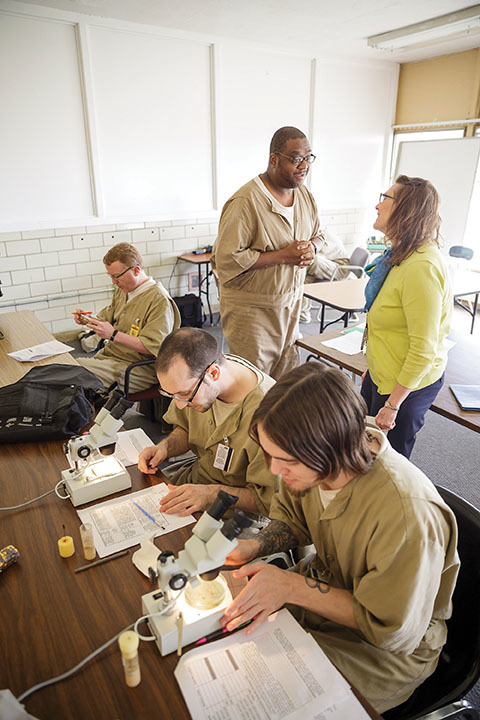 “I try to make it as similar to a regular lab as possible, keeping in mind that everything has to be brought in and taken out and cleared to get it in there,” Unfried says. “The course is plant biology. They can’t have any field trips.”

Westville inmates apply to the rigorous program — the acceptance rate is about 10 percent — and those who enter live dorm-style in half of a 102-bed cellblock that Alesha Seroczynski ’95M.A., ’99Ph.D., WEI director of College Operations at Holy Cross, expects to fill as the numbers grow. The first two graduates received associate degrees in liberal studies from Holy Cross last year, and nine more earned associate degrees this May.

“Just like a dorm on a traditional college campus,” she says, “the extent to which we can re-create the college culture in their living quarters facilitates even better learning, better study habits, concentrated conversations around the course material.”

Inmates with an insufficient math background can take a remedial course, and the writing program is spread across two semesters. The spring semester included classes in theology, drawing, business, botany and physics, both with a lab component. A Global Perspectives course featured refugees and refugee specialists as speakers; a class on Islam and Christianity was taught by the internationally recognized Notre Dame scholar Gabriel Said Reynolds.

Two students now released will be completing their bachelor’s degrees; one at Holy Cross, the other at Wabash College. The wife of another student brought their children to a ceremony on the Holy Cross campus, where he received an award for academic honors.

“As their academic adviser, it’s amazing for me to see the growth our students experience during their years in college,” Seroczynski says. “It’s literally life-changing.”

Jay Caponigro ’91, director of community engagement at Notre Dame, says the initiative aligns with the University’s mission to develop the mind, body and spirit of its students.

“If we’re able to meet them where they’re ready to change and grow, I think that’s a graced moment,” he says, for the inmates and for Notre Dame itself. “It’s also an institutional transformation. Can higher ed create an academic environment in a setting that traditionally would not value providing a liberal arts education to a population convicted of an offense? Our Catholic tradition doesn’t say we give up on them . . . [that] they don’t have potential to change or potential to contribute. We need to see how we can support that transformation.”

The science offerings, including labs, are a WEI enhancement of Bard College’s program. Physics department chair Christopher Kolda, a member of a Notre Dame committee that oversees the initiative, says the program also provided an unexpected recruiting advantage for a sought-after physics professor who asked first in her interview: “Can I teach at Westville?”

Integrating science into the prison-education program has been a challenge of logistics. How does one teach subjects that require sophisticated equipment and access to materials which might be off-limits within the prison walls?

Phillip Sloan, a Notre Dame professor emeritus in the Program of Liberal Studies, teaches history and philosophy of science at Westville, collaborating with Unfried. They conducted a laboratory on the generation of oxygen via home video and also performed on-site genetics experiments using botanical materials and fruit flies.

“I’m emphasizing methodological questions, focusing particularly on issues of physiology, zoology, genetics and evolution,” Sloan says. “With Brother Unfried, they do contemporary biological science. It will give them the vocabulary to conceivably go into med tech work, biomedical work, et cetera.”

Lara Arielle Phillips, a research assistant professor in physics who came to Notre Dame in 2009, was delighted to find out about the WEI. She started teaching Introductory Physics in autumn 2014 and has added a Physics of Civilizations course, which she also teaches to ND architecture majors, and a Descriptive Astronomy course, each with a lab.

“It’s quite a challenge because you’re trying to do a week’s worth of classes in one go,” Phillips says.

Unlike Notre Dame students with easy access to the Internet and major libraries, the inmates — who can’t observe the night sky for astronomy homework — have access to only a few physics books that Phillips put in their library. She is assembling a rudimentary portable lab so they learn how to use equipment for measuring as well as how to write lab reports.

“They rely on the reading of their textbook and on me to understand physics,” she says. “There is no Googling after I leave.”

As with Notre Dame students, Phillips perceives a common human thirst for knowledge.
“What I see is a curiosity, an interest, a focus that is very rewarding and has actually informed my teaching at Notre Dame. Sometimes they’ll stop me and say, ‘We don’t know what this means.’ I have to work harder to explain,” she says.

Although the state will reduce an inmate’s sentence for participation, there are easier ways to earn time off.

“You’re taking Notre Dame classes,” Seroczynski says. “You can’t just show up for class and pass and get your time cut. It’s tough. You’ve got a lot of homework to do. There’s a great deal of accountability.”

The challenging world of the Westville inmates can surface at surprising moments. When Unfried introduced the students to microscopes, he suspected some might be encountering the scientific tools for the first time. When he provided loose change for them to examine under a stereoscopic microscope, he recalls, “One fellow told me this was the first time in several years he’d handled any coins.”

When a friend who paid Catholic-school tuition and then college costs for his five children complained that the inmates are getting a free education, Unfried pointed out that the program — supported by grants and donations — is a bargain for society.

“Those who manage to get an education,” he says, “almost never go back to a life of crime.”
Nationally, more than half of people released from prison return within three years — at an average annual cost of $29,000. In general, recidivism for inmates who received educational opportunities while incarcerated is about 20 percent.

Sloan says the expected 400 to 500 convicted felons who will be released in St. Joseph County this calendar year have few employment opportunities beyond Goodwill Industries or RV companies in Elkhart.

“People are coming out with no money, often broken-off family connections, they cannot get loans, can’t get cars, can’t get housing, so many of them are back in within a year,” he says. “These ‘collateral consequences,’ as they are called in the legal community, penalize convicted felons far beyond their actual sentences and can hinder them for a lifetime. We are trying to give them some other options for what could be meaningful employment for people who want to turn their lives around.”

Unfried opened his botany course by suggesting the inmates might learn something that could help them get good jobs when they are released.

“When we started the class,” he says, “I told them, ‘You guys are going to get out. Go to a nursery and drop some technical botany terms. You might get a job doing something other than just planting the tree.’ They seemed to think that had possibilities.”