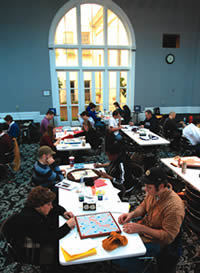 Take your time on this one—up to 25 minutes if you like: What’s a “cooee"?

According to the Oxford English Dictionary online, it’s an attention-getter, a call beckoning others to come, a Down Under colloquialism that out in the bush can take the place of “hello.” Word lovers dazzled by the flexibility of English may like to know that the word derives from the language of the Australian aborigines and found our tongue shortly after James Cook claimed New South Wales for the crown. To Americans, it would mean something like “within shouting distance.”

None of this matters to Notre Dame junior Adam Boocher.

“We don’t really care what words mean in Scrabble,” says the president of the year-old Scrabble Club of Notre Dame.

Boocher is a word-lover of another kind, the kind who studied flash cards of eight-letter words “in high school, when I had more free time.” The kind who states confidently that English has 101 two-letter words—according to that word book that matters most, The Official Scrabble Players Dictionary. The kind who can play 28 games over four days and be pleased to finish with a 20-8 record, 10th out of 80 competitors in the second-lowest division.

Recreational Scrabblers who take perverse pleasure in drubbing family members with the occasional 30-point word should know that Boocher has scored a 50-point “bingo"—playing all seven letter tiles at once—up to four times in a single game. It’s what competitive players do. He told the ESPN reporter covering the U.S. Scrabble Open in Phoenix last summer that his personal record was the 167 points he notched for laying down “creasing” over a pair of triple word bonuses on the board.

Still, Boocher is a Lilliputian in the Scrabble world. On the official scale that stretches from 500 to 2000, Boocher claims to rate a 1240. He acknowledges that his roommate is better than he is. During a head-to-head series last year in their dorm room—a buck a game, a penny a point—the rivals stopped at 30 games, with Boocher owing a $5 payout. Yet the two can only admire the savants who compete for tournament championships.

“I haven’t figured out how to be good at Scrabble yet,” says Boocher, who had no childhood Scrabble mentors. His family doesn’t even play the game. He turned on ESPN one day in high school, watched Scrabble coverage, and an advanced case of word-mania was born.

Yet Boocher’s is no solitary obsession. The National Scrabble Association, which encourages the formation of Scrabble clubs on college campuses, lists official clubs at such universities as Yale and Ohio State on its website. He says 135 students signed up for the club during Activities Night in the fall, though only 10 to 15 turn out to play—in roughly equal numbers of men and women—at LaFortune on a typical Sunday night.

The games can be competitive, like serious games of chess, with 25-minute clocks. They can be relaxed and fun. Boocher likes both, and he knows the club will fail unless all feel welcome.

In February, the club hosted a two-day, 12-round weekend mini-tournament in the LaFortune Ballroom. It attracted 54 Scrabble players—including seven current students—of wide-ranging abilities, one all the way from Maryland who said he came in part just to see Notre Dame. He toured the snow-covered campus in single-digit temperatures and returned home with the $275 gift card awarded to the first-division champion.

As the tournament organizer, a task he seems to enjoy as much as the game itself, Boocher didn’t play. “I do it because it’s fun,” he said. “It’s neat to bring new people to the game. And it’s good for the club.”

Doesn’t he ever tire of it?

Scrabble, you see, isn’t within cooee of this aspiring math professor’s true passion. Okay, he acknowledges, “it’s a passion, but it’s not my passion.”