I have a confession to make.

Growing up, I never once had a summer job — at least not of the paid variety. From the first time that my peers began taking shifts at the ice cream parlor or lifeguarding at the city pool, my parents made it clear that I had only one job to do: Get As. 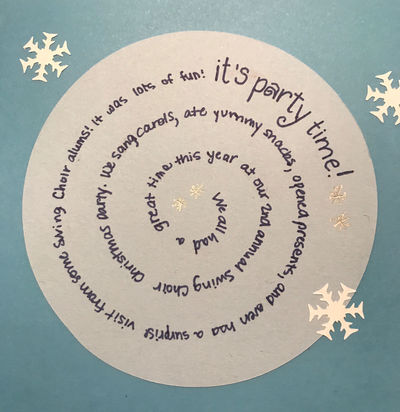 Detail shot of one of the author's scrapbooks. Skill required: Write in a spiral.

During the school year, this meant a relentless pursuit of homework, with occasional breaks for the 19 (yes, 19) extracurricular activities on my resume. In the summer, all of the homework and most of the clubs went on hiatus, but that didn’t spell respite from the drive. Oh, no. Summer was scrapbook season.

Living as we did in rural Indiana, it was decreed very early that my sister and I would join 4-H. Most people associate the youth organization with livestock showing, but I had neither the space nor the inclination to work with animals. Instead, I committed myself to what my club, without a trace of irony, called “non-walking projects.” Non-walking projects — duh — referred to those pursuits that, unlike the livestock events, featured no final product that could get up and stroll around the fair. The most famous (and most popular) are homemaking tasks, like baking and sewing, that sprang up in 4-H’s early days to give girls something to do while their brothers showed steer. But those didn’t interest me either.

I wanted to scrapbook.

Kids can join 4-H starting in the third grade, and in my club, scrapbooking is considered too advanced of an undertaking for those youngest members. I cycled through other projects in my early years — photography (my choice), entomology (my dad’s choice), forestry (Dad’s again) — but, by middle school, it was settled. My summers would be spent in unwavering devotion to 4-H scrapbooking — and if I was going to compete, I was going to win.

Ostensibly, 4-Hers have an entire calendar year to complete their projects. The walking-project kids spend the school year raising and training their animals, so while they do that, the non-walkers are supposed to get a head start on the projects they’ll be entering into competition at the county fair. I never managed that schedule. 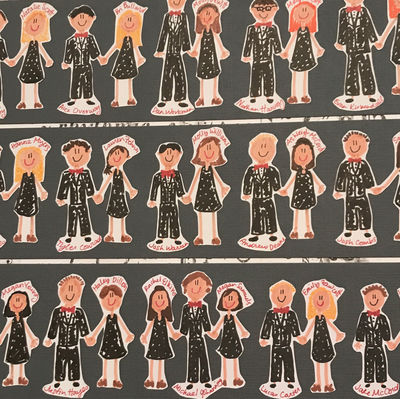 Detail of the full-choir cartoon drawn for a 2008 book, complete with accurate haircuts

Instead, once the school year ended, I would take a few days to see my friends and catch up on TV or reading, and then, Operation Scrapbook would begin.

The dining room table was too fancy to be sullied by my cutting and gluing, and the breakfast bar was too narrow to fit my 12” square paper, so my scrapping efforts were confined to a card table that spent most of the year folded up in the basement. From the moment my dad dragged that table up the stairs until the moment the fair began, I would do nothing but sit at my station and scrap.

My local 4-H club had extensive rules — ridiculous rules, some might say — governing the scrapbooking project. By the time you reached the advanced division, you had to meet not just a page count and a checklist of different techniques, but techniques within the techniques. You didn’t just have to hand-write a paragraph on every spread; you had to write a paragraph in a spiral. You didn’t just have to cut out paper mats for your photos to sit on; you had to differentiate the edges with three different kinds of decorative scissors.

The idea was to create a transferable rubric that judges could use on every book, even if the themes and mementos contained in the projects varied widely. (Hard to judge “My Year in Softball” against “My African Safari” unless some kind of rule-setting leveled the ground.) But the result was a labyrinthine system that played perfectly to my growing Type-A brain.

I’ve always had some kind of artistic impulse, but unstructured creativity was not my forte. An art form that combined crafting with rules, however, was perfect, and I thrived in the weeks each summer that I spent chained to my card table. Rule book requires hand-drawing this year? Here’s cartoon versions of my entire show choir. Rule book asks for creative photo placement? Here’s a guy in a Christmas sweater shoved into a paper snow bank. The projects allowed me to do something I enjoyed and to relive, in detail, the best moments of my teen years. The inside jokes from school trips, the souvenirs from vacations and the 16-year-old faces of my friends were frozen in amber in each summer’s book, and they’ll stay that way, even as the memories might otherwise fade. 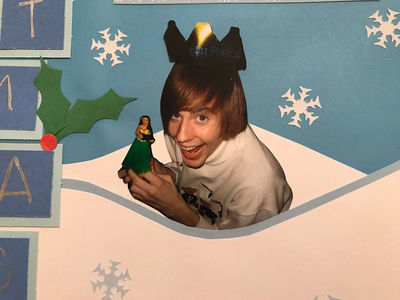 Yes, someone's photo really did get tucked into a paper snowbank.

My 80-hour weeks in Operation Scrapbook generally paid off with a grand champion ribbon, but that may have said as much about the War and Peace-sized rule book scaring off other participants as it did about my skills. I did have one consistent competitor, but the open secret that his mother made his books generally kept him from ranking higher than second place.

I guess you could say that scrapbooking taught me something valuable about hard work winning out over cheating, but (with the exception of that guy) everyone knows that already.

My summers of scrapbooking weren’t about life lessons. They were about love. Those competitions gave me a lifelong hobby, and a set of books that have lasted a whole lot longer than the cookies I would have eaten within a week in the baking project, or the cows or pigs I would have auctioned off at the end of each fair to, now that I think of it, also become somebody’s snack.

A few days ago, I signed the lease on a new apartment with its very own office. The realtor suggested I use that space for work, but I have a better idea. It involves a card table, a 48-pack of dual-ended markers, and a stack of 12-by-12-inch paper. I’ve got some memories to preserve.