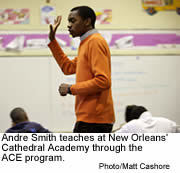 It’s not clear when the University began serving the Church beyond campus, but consider 1917. That’s when Notre Dame awarded graduate degrees to a pair of women religious — the first degrees earned by women at the University. For the next 54 years, before the University officially went co-ed, some 4,600 women religious earned Notre Dame degrees, mostly through summer study when, over time, they were joined by priests, seminarians and brothers and, eventually, lay people. “Penguin Days” — so-called because of the summertime predominance of black-and-white habits — trained a 20th century army for work in Catholic schools, hospitals, charities and religious orders, and begat an institutional inclination to meet the Church’s needs that takes many forms today.

Brushing up the business skills. The Master of Business Administration degree was created in 1954 exclusively for vowed religious. Naturally, the MBA focus evolved, and as the demographics of Catholic leadership shifted heavily toward the laity, business Dean Carolyn Woo eventually created the Master of Nonprofit Administration program.

MNA director Thomas Harvey, president emeritus of Catholic Charities USA, says more than half of the roughly 30 students in every class work for Catholic organizations. Students are typically in their 30s with 11 years of nonprofit experience. All are employed full-time and take courses on campus during the summer. Electives in topics from Catholic social thought to negotiation to nonprofit accountancy allow them to tailor their learning to job-specific needs. Faculty also offer non-degree short courses. A re-entry program serves career volunteers switching to traditional professional tracks.

A related program in the Mendoza College of Business helps leaders of agencies affiliated with Catholic Charities to clarify their mission for the benefit of Catholic and non-Catholic employees alike.

Reseeding higher education. It’s not unusual on campus to see cardinals and archbishops in their red and purple zucchetti, thanks to the Vatican lectures sponsored by the Nanovic Institute for European Studies. This semester alone, audiences gathered for addresses on European secularism and Christ’s love for migrants.

A more complex Nanovic initiative, the Catholic University Project, was launched in 2004 to support the growth of Catholic higher education in post-communist central and eastern Europe. The CUP, a consortium linking Notre Dame with four universities in Hungary, Poland, Slovakia and Ukraine, facilitates exchanges that allow young Catholic scholars to network and build their academic credentials, convenes symposia on such subjects as “The Spiritual Life and a Culture of Academic Excellence” and provides internships that take students overseas to do things like teach English in Ukraine.

Thinking about tomorrow. “No child should be denied his or her right to an education in faith, which in turn nurtures the soul of a nation,” Pope Benedict XVI told Catholic educators last year in Washington, D.C. Over its first 15-plus years, the Alliance for Catholic Education (ACE) has trained more than 1,200 teachers on campus in the summers, sending them forth for two years to teach as full-time volunteers in under-resourced Catholic schools. All commit to another three years of professional service in Catholic schools, and three in four stay in Catholic education. But those are only a few reasons why ACE co-founder Rev. Timothy Scully, CSC, ’76, ’79M.Div., traveled to the Oval Office last December to receive a Presidential Citizens Medal.

ACE is a model for programs at 14 other Catholic universities, training a new generation of lay professionals to replace the depleted numbers of religious men and women who built the largest private school system in the world. Now ACE offers a track for school principals that come spring will have graduated 100 professionals into the field. Other programs train English as a New Language instructors and offer management and consulting services to struggling schools.

Resolving age-old misconceptions. “There is no conflict between science and theology,” Father Hesburgh told Time in 1962, “except where there is bad science or bad theology.” The Reilly Center for Science, Technology and Values has been helping the Church — and scientists — do its thinking at the crossroads of philosophy, theology and the sciences since 1985. Last year it launched its online journal, Reilly Center Reports, with a look at the high-stakes debate over evolution and intelligent design. Now, observing the 150th anniversary of Charles Darwin’s On the Origin of Species, Reilly is working with the Pontifical Council for Culture and six pontifical universities to present “Project Evolution,” a series of conferences examining the questions raised by recent developments in evolutionary biology. The center’s director, theology Professor Gerald McKenny, says dialogue has long been hampered by claims that evolutionary theory “can only be explained in terms of narrowly conceived natural causes,” and that theology has nothing to learn. “What we’d really like to do is change the whole concept that theology and science are somehow in conflict and begin a new conversation in which each recognizes the other,” he explains.

Fighting extreme poverty. Catholic leaders in Uganda take the central African country’s struggle with poverty seriously, and the Ford Family Program in Human Development Studies and Solidarity wants secular professionals in the field to take religion’s role in addressing poverty seriously, too. While program staff educates the campus on extreme poverty around the globe through symposia and guest lectures, they’re on the ground networking with bishops, outreach agencies and the faculty and administration of Uganda Martyrs University (UMU), the nation’s leading Catholic institution of higher learning.

Through Ford, a unit of the Kellogg Institute for International Studies, Notre Dame and UMU faculty and staff are generating a collaborative research agenda and bolstering the Ugandan school’s academic capacity and information technology infrastructure. Not far from the UMU campus, the two schools are working together to engage residents of the village of Nnindye in grassroots efforts to improve education, water supplies, public health infrastructure, agricultural yields and commercial prospects.

Bridging the cultural divide. It is nearly impossible to enumerate the ways in which Notre Dame engages with the Church in Latin America and the Hispanic Catholic community in the United States, most prominently through various initiatives of the Institute for Latino Studies (ILS). But start with at least one good reason for the efforts: “When you look at the demographics of it,” Professor Allert Brown-Gort, ILS associate director, says of the under-25 Catholic population in the United States, “this is overwhelmingly the future of the Church.”

The University often hosts national gatherings of Hispanic Catholics, such as pastoral workshops for bishops and the First National Encounter for Hispanic Youth and Young Adult Ministry, which convened some 2,000 young Latinos in summer 2006, says theology Professor Timothy Matovina, director of the Cushwa Center for the Study of American Catholicism. Academic and pastoral conferences cover such topics as devotion to Our Lady of Guadalupe, the theology of immigration and the preferential option for the poor. Another initiative, the Kellogg Institute’s Latin American/North American Church Affairs, forges pastoral bonds and promotes cultural understanding among Catholic leaders and faith communities on both sides of the southern U.S. border.

Promoting social justice. Few Domers need to be acquainted with the Center for Social Concerns or its remarkable array of service and community-based research programs, since 85 percent of undergraduates participate in them before graduating. Instruction in the Gospel and Catholic social doctrine lies at the heart of it all, but the center lends the Church a hand in practical ways, too. During the center’s spring- and fall-break seminars and service projects, students often meet and work alongside priests and men and women religious from many orders as well as lay members of the L’Arche and Catholic Worker communities. When the waters rose in New Orleans in 2005 and again in Cedar Rapids last year, the center coordinated teams of students to assist diocesan-led recovery efforts. Partnerships with the Association of Catholic Colleges and Universities, the U.S. bishops’ Catholic Campaign for Human Development and Catholic Relief Services allow the center to share its 25-plus years of experience in teaching, research and service in social justice and poverty relief.

Making peace. In the 2,000 years since Christ blessed peacemakers and called them sons of God, religion’s role in war and peace has proven complex. Part of the mission of the Kroc Institute for International Peace Studies is to understand and address it for the better.

Fortunately for humanity, Catholic leaders are not alone in pressing for peace. At Kroc, faculty and students attracted to study peace at a place where faith is respected and valued represent numerous faith traditions from all parts of the globe. But direct work with the Church abounds: Earlier this decade, Kroc partnered with Catholic Relief Services to found the Catholic Peacebuilding Network, a coalition of 18 academic centers and Catholic agencies headquartered at Notre Dame to “enhance the study and practice of Catholic peacebuilding,” starting with extant efforts in Colombia, Burundi and the Philippines. Another major project? Crafting a “just peace” theology to complement the Church’s extensively developed notions of “just war.”

Separately, Kroc director R. Scott Appleby ’78 is bringing together Catholic and Muslim academics in a project called “Contending with Modernity.” The aim, he says, is to “build professional fellowship . . . and study questions like how these two traditions have negotiated religious freedom, democratization, challenges to religious authority, science — in particular reproductive technology — and critical ways of reading scriptures.

“Pope Benedict has made it clear that the Church wants to engage Islam on a variety of levels, including intellectual and academic. And that’s what we do at Notre Dame.”