I’m standing on the observation deck of the Pennsylvania State Memorial at Gettysburg. It is Saturday afternoon, June 22, a week before the festivities begin and this place is overflowing with tourists like me.

There are a lot of high places from which to see the battlefield, but if you can manage the tight squeeze on the spiral staircase my boys and I just climbed, this view is one of the best. We’re about 70 feet above the lush green lawn of the gentle elevation known to history as Cemetery Ridge.

“Ridge” is misleading. There are taller hills in South Bend. But this is where the Union army made its stand. This, in the Napoleonic terms used by the military minds of the early 1860s, was the “decisive ground” of the decisive battle of our nation’s defining moment, the Civil War.

One hundred and fifty years ago, most of the great military minds in the Western Hemisphere collided here, quite by accident, in the company of about 170,000 armed men. The battle lasted three days, July 1-3, 1863, and as the regiments arrived, representing nearly every state from Maine to Texas, they formed curved opposing lines a few miles long. 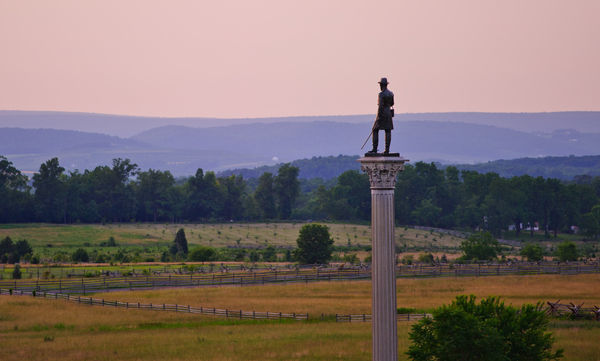 Cemetery Hill, just behind us, became the focal point of their efforts to outflank, repel, pummel, break through and crush each other. General George G. Meade of the North held it; General Robert E. Lee of the South wanted it. The last one to hold it, according to the strategic thinking of the time, would be the victor. So says the authoritative, barrel-chested park ranger who gave the orientation talk I attended with my son Edward, 12.

Gettysburg National Military Park has changed since my last visit, no doubt in anticipation of the battle’s anniversary this year. You could drop a lot of money on a licensed personal guide or a visit to the new museum, but during our two-day visit we never felt the need.

While Ranger Chuck Teague gave that free, half-hour intro lecture, my younger boys went outside and joined the army. They mustered in, learned the nine steps of loading and firing a musket, elected my son Peter, 11, company captain, marched and maneuvered, sent my other son, David, 7, off to scout for Confederates, fired a few opening volleys and then ran down the hill, firing at will.

It was the most extensive role-play I’ve ever seen. If I forget everything else about this weekend, I will at least have this photograph—a line of several dozen boys and girls, three abreast, with serious faces, rifles on their shoulders, and the familiar, scrunched-down Union kepis cocked on their heads. After an hour of drilling they looked like a nineteenth-century army, if you ignored the Bermuda shorts and lime-green sunglasses.

In age, my sons represent the golden era of my own lifelong acquaintance with the Civil War, when I had only my grandfather’s rich stories – some he’d heard from ancient veterans as a boy growing up in upstate New York, some from a lifetime of reading – to rely on.

Today we are stalling for time before leaving town, hoping to see the blue-coated company of reenactors below us load and fire their muskets. The best we’ve gotten so far is some rough marching and about-facing, and some virtuoso tin-whistling out of a man sitting on an upended crate in front of his tent.

So we look around, piecing together what we’ve learned from all the books, tours and walks. Medallions on each corner of the memorial’s observation deck offer sight lines to the battlefield’s major landmarks.

There’s the old town itself, all spruced up in flower boxes and painted brick for the sesquicentennial, about a mile to our north. Culp’s Hill rises to the northeast on one extreme of the Union line, and Little Round Top, about a mile south of us, on the other.

Away to the west, again about a mile, their outlines blurred against the trees, stand the Virginia and North Carolina Monuments on Seminary Ridge – the push-off point for one of the great errors of judgment in military history. Pickett’s Charge cost thousands of lives in around an hour as 12,500 Confederates crossed the low-rolling fields to smash through the Union center. Not one man made it across. A cluster of memorials mark the “high-water mark of the Confederacy” just a short walk to our north.

That was July 3, 1863. Lee thought he’d be celebrating Confederate independence on the Fourth of July. Instead, four score and seven years after the signing of the Declaration, his rebel army crossed the Mason-Dixon line for the last time, heading south.

Looking out from the rooftop of this neoclassical pavilion in white North Carolina granite, it’s easier to understand the disaster. There was simply nothing to shield all those men as they came this way — a dose of sad truth to balance out the fun of role play.

It’s hard to know what to feel. There’s gratitude, of course, for the men in blue who fought here, and respect for the men in gray. There’s relief that things turned out the way they did in the end, but a profound doubt over whether any of the 625,000 war-related soldier deaths, not to mention the widespread destruction of land and homes, lives and livelihoods from here to Georgia to Mississippi was necessary. After all, as historians point out, Brazil became the last Western nation to abolish slavery in 1888, when the dwindling survivors of the Battle of Gettysburg held their first reunion. And yes, I know it was more complicated than that.

I see two other things beyond the blue hills that stretch to the south and west. One is a little boy struggling to reach the top of a slope, hot tears streaming down his face, unable to overcome his older brother in what began as a boys’ game, King of the Hill, but had turned into something else.

The other is that same boy, a bit older, sitting outside after dinner one cool evening, wondering what it was like to make the kind of sacrifices his grandparents had made during the great war of their own time, and feeling sure that he’d never have to.

Though others are — right now, today, in violent conflicts around the world, including that older brother and his family — he never did.

As for my own sons, I am left only with a yearning for peace, and with hope.