Green thumbs envious of Notre Dame’s botanical splendor no longer need a five-fingered discount when they’re tempted to take a plant or two home with them. The “Shamrocks of Notre Dame” are now available at the Hammes Notre Dame Bookstore during special event weekends, and at Varner’s Nursery in Niles, Michigan, where they are cultivated for sale and for transplant into Notre Dame soil. In May, ND landscape services crews planted 500 of the lush, floppy, three-leaf clovers around the Main Building and the statue of the Sacred Heart, near the Eck Visitors Center and in front of McKenna Hall. “Anything that’s Notre Dame, people want,” notes manager Patrick McCauslin, who in his 29 years of making campus beautiful says he’s witnessed guerrilla gardeners reach out of car windows to swipe tulips from Morris Inn flower boxes and seen freshly planted geraniums disappear overnight. That’s a no-no, but McCauslin says he’s happy just to see the University finally selling something it’s growing. The white-flowered shamrocks, annuals that will not survive a frost, grow happily indoors year-round and are available for $15 in plastic or $30 in a ceramic ND pot. Learn more at shamrocks.nd.edu. . . .

Keep an eye out for past, present and future Notre Dame athletes at the 2012 Olympic Games this summer in London, especially in the fencing events. Former Irish fencer Mariel Zagunis will defend her back-to-back gold medals in women’s individual sabre as one of five swashbucklers with ND ties to represent the United States. Kelley Hurley ’10 (women’s epee) and Gerek Meinhardt (men’s foil) will compete as reserves in the team competition in their events. Like Meinhardt, Kelley’s sister Courtney Hurley took her senior year off from collegiate fencing to train. She will compete in women’s individual epee. Meanwhile, incoming freshman Lee Kiefer, the top-ranked American in women’s foil, will seek Olympic success before heading to South Bend this fall. In cycling, former Irish hockey defenseman T.J. Mathieson ’04 was named to the track long team in December. Soccer midfielder Shannon Boxx ’98 will compete for the United States in her third summer games, and at press time junior forward Natalie Achonwa, who scored 7 points in 27 minutes against Baylor in the 2012 NCAA women’s basketball tournament final, had just secured her spot on the Canadian squad. . . .

“Hire Me” is a familiar message written in masking tape on many a graduate’s cap on Commencement Day. This year Amanda Jonovski ’12 distinguished herself by adding a QR — quick response — code for good measure. The graphic design major’s version of the increasingly ubiquitous, scannable black-and-white square took curious smart-phone users to her online portfolio. Jonovski told ABC News she hopes to find a job in Boston or Chicago, which, given her quickness, she’s probably done already. . . .

AllianceND’s application for student club status was deferred until the autumn semester, pending the conclusions of a review this summer of University policies and provisions for gay, lesbian, bisexual, transgender and questioning students that administrators said would be conducted in the context of ongoing conversations with student leaders. The Office of Student Activities said it was the first time in at least 15 years that any would-be club’s application was deferred, rather than simply approved or denied. Campus gay-rights activists viewed the deferral as a positive step after months of renewed efforts that were endorsed for the first time this year by resolutions from both the student and faculty senates. The club decision came one week after the University announced in April that it would maintain the wording of its nondiscrimination policy while reaffirming the welcoming precepts of the University’s 1997 “Spirit of Inclusion” statement, strengthening awareness of existing procedures for reporting perceived acts of harassment and discrimination, and improving training for first-year orientation commissioners and residence hall staff. The current nondiscrimination policy, written mindful of distinctions made in Catholic teaching between sexual orientation and sexual conduct, which might not be recognized in civil courts, does not include specific language protecting students, staff or faculty from discrimination based on sexual orientation. University officials maintain that harassment and discrimination are inconsistent with the University’s Catholic character and will not be tolerated at Notre Dame. “We think it is important for our faculty and staff and students to not only feel just comfortable here but to know that if the need were to arise, that they have access to a full range of remedies, including legal remedies, if they were wronged in any way because of sexual orientation,” University spokesman Dennis Brown told The Observer in May. . . .

Fourteen Fortune 500 CEOs hold Notre Dame degrees — 10 undergraduate and four graduate — according to a U.S. News & World Report analysis of the annual, revenue-based Fortune ranking of American corporations. The figure ties Notre Dame with the universities of Michigan and Virginia for fifth place. . . . 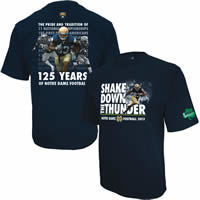 The Shirt costs a little extra this year — $17.99 plus tax, to be precise. For the first time in 14 years, buyers are paying more than $15 apiece for the favorite garment of the stadium-going Fighting Irish football fan, which raises money for students facing extraordinary medical bills and other on-campus needs. Apart from the price tag, though, The Shirt 2012 bears another new mark, an Alta Gracia clothing label, along with a thumbs-up from the Workers’ Rights Consortium, a higher-education watchdog that monitors the business practices of apparel companies which target the college market. Notre Dame is one of more than 180 schools in the consortium, which has confirmed that workers at the Alta Gracia factory in the Dominican Republic are paid a “living wage” that covers the cost of food, adequate housing and other basic expenses for their families. A 2010 story in The New York Times found employees earning about $500 a month, reportedly more than three times the country’s minimum wage. So far, Alta Gracia, owned by South Carolina-based Knights Apparel, is the only label to have earned WRC approval. Samuel Evola, a junior who has volunteered to promote the label at Notre Dame, says the company hopes to renew its relationship with The Shirt 2013 Committee when it forms this fall. In the meantime he and others have worked to make Alta Gracia clothing available to residence halls and clubs through a local garment printing company and want to see the label on other products in the bookstore. . . .

Fifty years ago this October, Pope John XXIII opened the windows of the Church to let in some fresh air, as he liked to say, convening the world’s Catholic bishops for the opening of the Second Vatican Council. While some of the freshening was felt immediately in the Mass and other aspects of Catholic life, the Council’s much-debated “spirit” has emerged only slowly in the decades since. These days, as Archbishop Jean-Louis Bruguès noted on campus in March, “The list of direct witnesses, not to mention of the participants of the Council themselves, gets shorter every day.” Bruguès himself turned just 19 in 1962. Now, as the secretary of the Congregation for Catholic Education, he oversees formation in the Church’s seminaries and institutes of study. Delivering the annual Terrence R. Keeley Vatican Lecture, the archbishop noted several Vatican II-inspired trends he believes will continue to shape the Church’s future, including a growing zeal for scripture, a renewed openness to the Holy Spirit as modeled by early Christians, a deeper concern for non-Christians, ecumenism, “a principle of benevolence toward the world as it is,” and strengthening collegiality among bishops. “Vatican II wanted to put the fact of listening to others at the center of the Church, of society, and ultimately of all human life,” he said. “This attitude of listening finds expression in a taste for the other, a concern for the other, finally a perception of oneself as another.” A copy of Bruguès’ address, “The Second Vatican Council Ahead of Us,” is available at the website of the Nanovic Institute for European Studies: nanovic.nd.edu/programs-partnerships/keeley-vatican-lecture/. . . .

Badin Hall residents in search of Prince Charming may soon get by with a little help from their frog. Ana Zavala ’12, a residential assistant and industrial design major from San Diego, left her dorm a parting gift in the form of a bullfrog she hand-carved from a scrap block of mahogany that was used to fashion the University president’s ceremonial podium a few years ago. The as-yet-unnamed amphibious mascot was Zavala’s semester project in architecture Professor Robert Brandt’s Carving Classical Architectural Elements class. It now greets Badinites and hall visitors from atop the newel at the foot of the dorm’s central staircase.