The Suicide Disease, a film by 2014 graduates Katie Mattie, Vincent Moore and Will Neal, won first place in the short documentary category at the Sunset International Film Festival Los Angeles. The documentary follows the life of Frances Shavers, a former chief-of-staff and special assistant to University president Father John Jenkins, CSC, as she enters her fourth year of battling trigeminal neuralgia, a painful disease that causes 50 percent of those afflicted to commit suicide within two years of their diagnosis. . . . 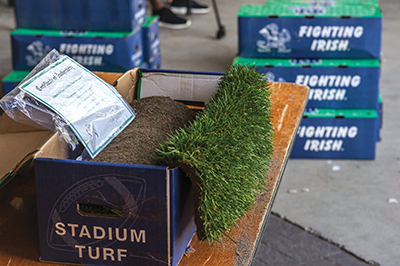 Out with the old, in with the synthetic turf. As commencement wound down, the grass in Notre Dame Stadium was ripped up. For those prone to nostalgia, this isn’t the land that Rockne trod on — a massive resodding effort occurred in 2007, and patches have been routinely redone since. But for grassroots fans, a 5-by-2-foot piece of sod was available for purchase for $149.95. . . .

A possible cure for MRSA, the antibiotic-resistant staph infection that causes more than 75,000 life-threatening illnesses and 19,000 deaths in the United States annually, has been discovered by a Notre Dame research team headed by chemistry professors Mayland Chang and Shahriar Mobashery. The new class of antibiotics, called oxadiazoles, has been able to treat many drug-resistant bacteria and has proven to be an effective oral treatment when tested on mouse models. . . . 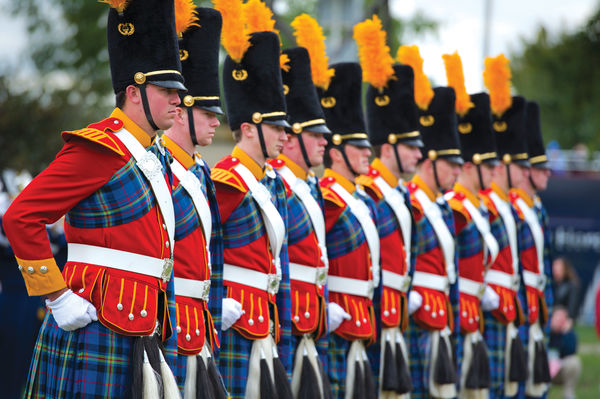 One year of band service will replace the previous 6-foot-2 height requirement as the primary eligibility prerequisite for the Irish Guard, the beloved protectors of the marching band. Once upon a time, guard members were bagpipers who played with the band, director of bands Kenneth Dye said, and this move will return the group nearer to its historical roots. There will also be a goal to make membership of the kilted crew a one-year reward for band leadership, rather than a three- or four-year duty. Guard captain Andrew Pemberton ’15 told The Observer, “I would hope that the significance of the Irish Guard within the band would become more prominent as a result of these changes, as that was their intended effect, but I can’t help but feel that [the Guard’s] significance on campus and as a symbol of the strength, integrity and athleticism of Notre Dame and of the Fighting Irish will slowly diminish as a result of these changes.”. . .

Trailing 5-1 at halftime, the situation looked bleak for the sixth-seeded Notre Dame men’s lacrosse team in their championship contention against Duke. But freshman Sergio Perkovic put in a quick five goals, along with a few from teammates Matt Kavanagh, John Scioscia and Ben Pridemore, to keep the game interesting. After ND closed the gap to a one-point deficit, Duke notched another goal with 23 seconds left to seal their third title in five years with a final score of 11-9. . . .

Fixing the economy is no small job, but ND associate professor Abigail Wozniak is up for the challenge. The labor economist recently began a one-year assignment as a senior economist on the Council of Economic Advisers, the group that counsels the executive branch on policy making, and could make recommendations on everything from immigration to higher education reform. . . .

Farewell to football, volleyball, golf and other phys ed endeavors. Gone are those infamous swim tests and classes. Beginning with the 2015-16 school year, athletic participation will be replaced by two one-credit lecture courses, with a small-group discussion component. The focus will be on wellness, stress relief, spirituality and academic success, with the hope that students will “develop a deeper understanding of the complex interactions of gender, sexual orientation, class, ethnicity and race in the U.S.” In 2010, only 39 percent of colleges and universities still had physical education requirements, but some selective schools — including MIT, Cornell and Bryn Mawr — have held onto them.

A chance encounter has led to the first discovery of what might be an exomoon, a moon orbiting a planet outside our solar system. In their study, David Bennett, a ND professor of astrophysics and cosmology, and an international team of research partners used a technique called gravitational microlensing, which allows scientists to better view a star when another star passes it. In this instance there were two spheres in the way. The 2000:1 size ration of the two spheres suggested a moon and planet relationship, but because of the unfortunate alignment of the bodies, researchers cannot be certain of the interpretation….