Notre Dame has reversed a long-standing policy against manufacturing licensed products in China, where the law prohibits free association for workers. University President Rev. John I. Jenkins, CSC, ’76 announced the decision in an October letter to the campus community.

Acting on the recommendation of a Worker Participation Committee made up of students, faculty and administrators, Jenkins instituted a pilot program with selected Chinese factories “to see if they can meet and sustain worker treatment standards in keeping with Catholic social teaching.”

Working with manufacturers that met Notre Dame’s conditions as well as those that did not, Jenkins said, “allows us to affirm those factories that have high standards of worker participation and to encourage other companies to meet these standards.”

In an Observer letter to the editor, Todd Whitmore, associate professor of theology, disputed the president’s appeal to Catholic social teaching, including the idea that the new policy does not violate the principle of cooperation with evil. “The principle . . . applies when there are not other viable options,” Whitmore wrote. Notre Dame’s successful production of licensed merchandise in other countries since boycotting China in 2001, he argued, demonstrated Jenkins’ “misappropriation” of the principle to support the decision.

Acknowledging opposition to the committee’s recommendation, Jenkins said in his letter that Notre Dame’s intention to use its leverage against unjust Chinese labor laws showed the pilot program could not be seen as cooperating with evil. “On the contrary,” Jenkins wrote, “we are trying to develop a policy that is as effective as it can be in furthering the recognition of [workers’] rights around the world.” 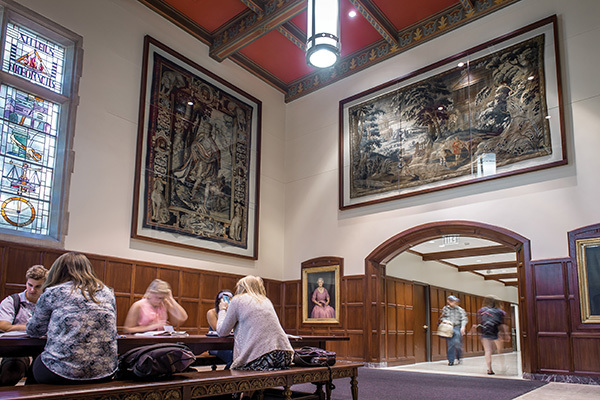 O’Shaughnessy’s Great Hall had an allure and charm in its early days that had faded over time. In 2013, the College of Arts and Letters decided to restore it, as much as possible, to its original state.

With the 1953 blueprint in hand, the college’s assistant director of facilities and academic space Matt Fulcher and his colleagues set to work. They were able to restore the wood, walls and ceiling in 2014. But after looking again at their documentation, Fulcher noticed two missing tapestries that had once hung on the walls.

Deep in a Snite Museum storage closet, employees found a pair of rolled-up rugs — the tapestries Fulcher was looking for. He contracted Harold Mailand from Textile Conservatives in Indianapolis, who needed 12 months to restore both tapestries dating to the 17th and 18th centuires.

Waiting for an envelope in the mail, and using its thickness as the first hint of the news it contained, has long been a rite of passage in the college admissions process. For Notre Dame’s incoming Class of 2020, admissions decisions will be sent electronically for the first time.

Common in higher education, e-notification became more of a priority for the University last year after postal delays left some students waiting longer than others. Student focus groups also indicated that applicants wanted to receive their decision as soon as possible. This year, the new process will notify everyone at once.

Regular Decision applicants are expected to have decisions available at the end of March.

The old snail-mail method hasn’t been entirely eliminated. Although it will lack the drama of the past, admitted students will receive a hard copy of their acceptance letter after their electronic notification.

Jake Scanlan had a way of becoming instant friends with just about everyone he met — and through him those relationships would ripple out into wider circles. “I made a lot of new friends this semester because I was around him,” Notre Dame junior Jackson Fox told the Observer in November as the campus community mourned Scanlan’s death.

A Siegfried Hall resident, Scanlan was found unresponsive in bed on the morning of November 11. Attempts by fellow students and emergency responders to resuscitate him were unsuccessful. Preliminary results from an inconclusive autopsy showed he had an enlarged heart but did not determine a cause of death.

Scanlan, 20, a junior mechanical engineering major from North Potomac, Maryland, was remembered for “doing his own thing” with an authenticity and a generosity of spirit that drew others to him.

“Despite our struggles that God took a beloved member of our community away too soon,” Father Pete McCormick, CSC, ’06M.Div., ’15MBA said in his homily at a memorial Mass at the Basilica, “we can’t help but see how God poured his love into Jake’s heart, and, man, did it change lives.”