Notre Dame will not be designated a sanctuary campus, University President Rev. John I. Jenkins, CSC, ’76, ’78M.A. said in a letter responding to a faculty senate resolution. The student senate issued a similar call for the administration to declare Notre Dame a sanctuary campus to protect undocumented students from policies that could threaten their status in the country.

Supporters of the faculty resolution, American Studies Associate Professor Jason Ruiz told The Washington Post, wanted the University to vow resistance to legal challenges that could arise in the current political climate, threatening the status of students known as “Dreamers” under the Deferred Action for Childhood Arrivals (DACA) immigration policy.

“It was the faculty of the university saying to our president, ‘In times such as these we might have to break the law and we support you in that,’” Ruiz said.

In his February 7 letter, Jenkins said the legal implications of a sanctuary designation were minimal and could create “a false sense of security.” Although the University does not and would not voluntarily provide information about DACA students without a legal order, he said, “we would comply with the law and so cannot promise a campus entirely ‘free from civil intrusion.’” The symbolic impact of a public declaration, he added, could “draw attention to these vulnerable students and provoke a reaction from authorities that we might otherwise avoid.”

Jenkins said he shared the faculty senate’s concern for undocumented students and stressed that the University would continue to support them. He referenced his comments at a November campus prayer service. Speaking directly to the University’s approximately 40 undocumented students, Jenkins said, “You accepted our invitation to come to Notre Dame, you are now a part of our family, and we will do everything we can to ensure that you complete your education at Notre Dame.”

Megan Crowley was diagnosed with Pompe disease, a rare degenerative neuromuscular disorder, at age 15 months, and she was not expected to live past age 5. Now she’s a 20-year-old Notre Dame student whose journey received national attention on February 28 during President Donald Trump’s address to Congress. 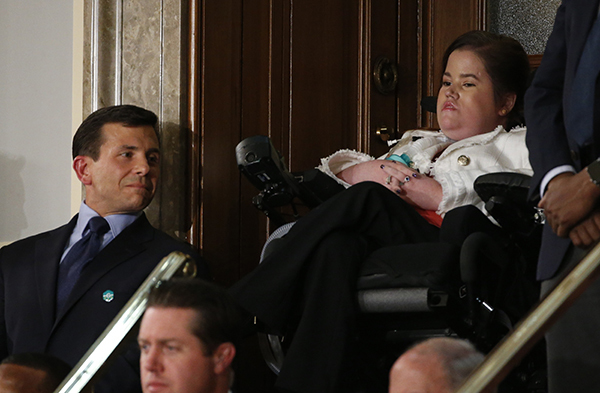 Crowley attended the speech, receiving two standing ovations after Trump acknowledged her, saying that more stories like hers would be possible with fewer regulations hampering medical innovations.

“Megan’s story is about the unbounded power of a father’s love for a daughter,” Trump said, referring to the efforts of John Crowley ’92J.D., who started his own company after becoming frustrated with the slow pace of Pompe research. He’s now the CEO of Amicus Therapeutics, a company that develops therapies for rare diseases.

Megan blogs about her experiences at highheeledwheels.com and serves as president of Notre Dame’s chapter of the Make-A-Wish Foundation.

Vice President Mike Pence will be this year’s commencement speaker. The March 2 announcement ended speculation about whether President Donald Trump would deliver the address, as his predecessor Barack Obama did, amid much controversy, during his first year in office.

Notre Dame President Rev. John I. Jenkins, CSC, said in a statement that the former Indiana governor, who will receive an honorary degree at the May 21 ceremony, is a fitting choice as the University prepares to mark the 175th anniversary of its founding in the state.

“With his own brand of reserved dignity, Mike Pence instilled confidence on the state level [as governor], and on the world stage now,” Jenkins said. “We are proud to welcome him to represent the new administration.”

Notre Dame has a new home in Palo Alto, California. A renovated downtown building, owned by and shared with AT&T, opened in February as the headquarters of Notre Dame California and the site of classes for the University’s new Silicon Valley Semester.

In January, 10 Notre Dame computer science and engineering students became the first participants in the Silicon Valley Semester, which combines a full course load with internships that also earn academic credit. Notre Dame California collaborates with Silicon Valley companies in a variety of industries to provide the internship opportunities.

Engineering Professor Patrick Flynn, the interim director of Notre Dame California, said the goal is to quadruple the number of students participating in the Silicon Valley Semester next year and expand it to other areas of study. Similar programs are also envisioned in other parts of California. . . .

By early 2019, about 7 percent of Notre Dame’s electricity needs will be generated from a hydroelectric facility that the University will construct in downtown South Bend. In December, the city’s parks board gave the University the right to build the facility on the St. Joseph River dam. Transmission lines will conduct the electricity to campus.

For more than three decades, the City of South Bend has held an exemption from the Federal Energy Regulatory Commission to operate a hydroelectric facility, but budget constraints have prevented its development. The agreement with Notre Dame, a 50-year lease, transfers the exemption to the University. Notre Dame will pay South Bend $1 million for the dam’s maintenance for the duration of the lease and for the restoration of the adjacent Seitz Park.

“This is a great example of what city-university partnerships can look like in the 21st century,” South Bend Mayor Pete Buttigieg said.

Notre Dame considers the hydroelectric facility one facet of its sustainability plan — including gas-turbine technology, geothermal systems, solar energy and heat recovery — that will eliminate the University’s use of coal by 2020 and cut its carbon footprint in half by 2030. 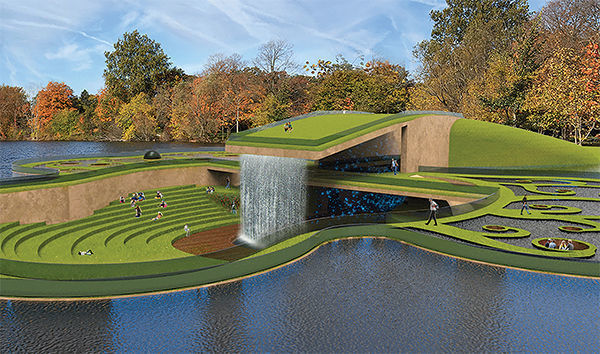 The Notre Dame students imagined a shamrock-shaped island in one of Notre Dame’s lakes called Spirit of the Isle, a place for students to exercise, enjoy a play at the amphitheater or explore behind the waterfall in caves that transform to a skating rink in winter.

Fast food is bad for you. That fact is not under wraps — rather, it’s in the wrapper.

Research has shown per- and polyfluoroalkyl substances (PFASs) to migrate, so their appearance in 56 percent of dessert and bread wrappers, 38 percent of sandwich and burger wrappers, and 20 percent of paperboard is concerning.

Peaslee, a professor of experimental nuclear physics, called the chemical “really persistent. . . . It gets in the blood stream, it stays there and accumulates.”

Now we know that a stop at the drive-thru fills us up with more than saturated fat.

“Who’s doing the dishes?” might cause fights at home, but Dean Laura Carlson is hoping it fosters new conversations in the Graduate School kitchen.

The office kitchen, located on the fifth floor of the Main Building, now contains no paper products. The department even requests that catering companies not provide plastic forks or paper plates.

The hope is that a newly renovated kitchen, including a kitchen sink, will encourage sustainability and conversation. Carlson also hid the kitchen’s trashcan but kept the recycling bin in the open, making the sustainable choice easier for the office.

For larger events, a few individuals — including Carlson — will volunteer to clean the dirty plates.

The office also implemented a zero-tolerance policy for dirty dishes left around the kitchen. If the user cannot wash a dish right away, they are requested to leave it at their desk. If dirty dishes are left in the kitchen, an email reminder will be sent around the office.

In order to avoid childhood flashbacks, we recommend that the Graduate School staff do their chores without being asked.