A sneaky pet lizard squirms away at Notre Dame’s rock climbing wall, two friends study for a history test by play-acting the Revolutionary War, and children take an unforgettable field trip to see the president of the United States in Every Child Has A Story: Robinson Community Learning Center Edition. Written and illustrated by Robinson Center kids with help from members of Notre Dame’s Student International Business Council, the book will raise money for the Robinson Center, the off-campus hub for supplementary learning and community activities that the University founded in South Bend’s Northeast neighborhood in 2001. For ordering information, contact everychildhasastory@gmail.com. . . .

Seven ND engineering students trekked their way into a badly flooded district of rural northwestern Nicaragua in October to meet civic leaders and survey the site of a footbridge they are planning to build this summer. The project marks the fourth year in a row that a team from NDSEED — Students Empowering through Engineering Development — has worked in Central America at a locale selected by Bridges to Prosperity, a volunteer-driven charity seeking to eliminate rural isolation as a cause of poverty. Sophomore Luis Llanos, the lone mechanical engineer on the civil engineering team, says it will take six weeks and about $25,000 to build retaining walls, elevating towers and the 40-meter span itself, mostly out of local materials, across a major stream near the tiny village of San Francisco. When finished, the bridge will serve hundreds of families who are dangerously cut off from the city of Estelí most autumns, often for weeks at a time. Learn more about the project. . . .

About 300 alumni in the money management business gathered with other industry experts at the New York Hilton November 1 for meetings and talks on investment strategies and Wall Street financial concerns. The discussions also provided an opportunity for senior alumni in financial services to network with young alums, explained Scott Malpass ’84, Notre Dame’s chief investment officer. “Notre Dame alumni are among the most respected professionals on Wall Street,” he said, noting the very recent success of the University’s Career Center placing interns on Wall Street. Syndicated columnist George Will also addressed the conference, co-sponsored by Notre Dame’s Wall Street Leadership Committee and the University’s investment office. . . .

The painful news of child sex abuse allegations at Penn State made its way into the discussion in at least one Notre Dame classroom. Law Professor Mark McKenna ’97 found himself fumbling for an answer to a student’s question in his torts class: Might Joe Paterno be exposed to liability for not telling police about the alleged sexual assault of a boy in the locker room? In an essay, “The Cruel Lesson of Penn State,” published November 18 in the online magazine Slate, McKenna disclosed his own experience of abuse as a minor, perpetrated by a youth sports coach. “Abuse thrives on silence,” he wrote, reflecting on the emotions that had overwhelmed him that day at the Law School. “But it is precisely this silence that helps create the conditions for abuse.” McKenna wrote to break that silence and offer encouragement to other victims. He also argued against the tendency to demonize accused assailant Jerry Sandusky and to focus blame on Penn State or college sports in general, warning that these reactions allow us to miss “what happens, or can happen, in our own backyards.” Within days, McKenna says, he received more than 600 emails voicing support, many from strangers who shared their own stories. “It seems to have touched a nerve, and that was the hope.” . . . 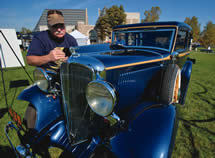 The short-lived Rockne Motors Corporation, a subsidiary of South Bend’s famous Studebaker Corporation, built only 38,000 Rocknes before it expired in 1933 in the midst of the Great Depression, but it’s hard to imagine an antique car more lovingly restored than the model that subway alumnus George Gajdos offered for display before the October 8 game against Air Force. Visitors were invited to have their picture taken with the blue-and-gold beauty on the Irish Green as part of the Rockne Heritage Fund/Director’s Circle Recognition weekend. . . .

Father John Jenkins’ daytime television debut on the November 10 broadcast of Live! with Regis and Kelly came one week before Regis Philbin’s last bow as co-host of the popular morning talk show. The University president’s visit was a surprise tribute to Philbin ’53, who holds the Guinness World Record for “Most Hours on Camera” and often spoke enthusiastically of his alma mater on the air, regaling audiences with affectionate descriptions of everything on campus from his favorite duck in Saint Mary’s Lake to the courtrooms in the new Eck Hall of Law. Jenkins’ appearance followed that of former Irish football coach Lou Holtz and included the presentation of a replica of Holy Cross Father Anthony Lauck’s statue of the Visitation, which stands outside the campus bookstore. “I had to come out on behalf of the whole Notre Dame family to tell you how much we love you and how proud we are of you,” Jenkins told the humbled entertainer, adding, “We expect to see more of you now.” . . .

Irish hockey’s frosty new digs, the Compton Family Ice Arena, opened just in time to house what feels like a new era for the varsity program. The Irish icers opened the 2011-12 campaign with their first-ever national preseason No. 1 ranking but suffered their first home loss (to Ohio State) at their October 15 farewell to the Joyce Center. Six days later they trounced Rensselaer before a record crowd of 5,022 — the venue’s capacity — at the Compton opener. Tickets for the building’s dedication game on November 18, in which the Irish managed a dramatic 3-2 overtime win over Boston College, sold for as much as $500 on StubHub. Meanwhile, the program made its own relatively quiet move in the tectonic conference realignments sweeping college athletics. Notre Dame will join the Hockey East conference as its 11th member for the 2013-14 season in response to the Big Ten’s choice to form its own hockey league and the subsequent decision to disband the Central Collegiate Hockey Association, the team’s home since 1992. Televised games are expected to be part of the new era, too. This season, fans may still catch the team — and Compton — on the NBC Sports Network when the Irish play Michigan on January 20. . . .

Rankings come and rankings go in the hypercompetitive world of higher education, but here are three you likely missed in 2011: USA Today awarded Notre Dame first place in the strategic use of social media websites like Facebook, Twitter and YouTube. The editors of onlinecolleges.net considered the “Irish Blessing” TV spot fourth on their list of most creative college commercials. Best of all may be hercampus.com’s Collegiette, who considered “Designing an Environment for Design” one of the 10 coolest college classes in the country. Apparently Collegiette (Kenyon College student-blogger Sarah Kahwash) read the course description for the 2009 class on ND’s website and liked the idea of asking top design students to propose a cross-disciplinary research environment for Stinson-Remick Hall, then under construction. . . .

Thousands of arms crossed in an ‘X’ swept Notre Dame Stadium on Saturday, October 29, way beyond the familiar spot occupied by residents of Zahm Hall. This time the X, a Zahm symbol traditionally raised during the Celtic Chant at football games, honored former resident Xavier Murphy ’11, a fifth-year student and football-team intern who died October 11 after being diagnosed with leukemia only the month before. Zahm rector Corry Colonna described Murphy to The Observer as energetic, faithful and kind, and noted that the letter in the “Raise an X for X” campaign he organized in Murphy’s memory could also be a variable representing anyone fighting cancer. The campaign’s T-shirt and bandana sales raised money for a scholarship in Murphy’s name at his high school and for the cancer charity Relay for Life. . . .

The place where Declan Sullivan would meet his family after home football games — between the Guglielmino Athletics Complex and the LaBar Practice Fields — is now the site of a memorial in his honor. Sullivan was a 20-year-old Notre Dame junior and a student-videographer for the football team on the October 2010 afternoon when a 53-mph wind toppled the scissor lift on which he was standing to film practice. He died in the accident. The parklike memorial consists of six trees, a boulder-mounted plaque bearing a shamrock with Sullivan’s initials and a poem written by a family friend, and two benches inscribed with messages from his siblings Wyn, a Notre Dame sophomore, and Mac. Soon after the dedication ceremony, the University announced the creation of the Declan Drumm Sullivan Scholarship for financially needy students who share one of Sullivan’s interests such as filmmaking, creative writing or community service. . . .

Coaching inevitably saps its most dedicated practitioners, but no one’s said it better than men’s lacrosse assistant coach Gerry Byrne, who was quoted in the October 2010 issue of Lacrosse Magazine: “Now that recruiting tour season is over I realized there is a whole other world, things like dentists, lawns, sunsets, your kids’ names.” . . .

Frigid swampwater, 12-foot walls and electrified barbed-wire fields won out over books and the BC game the weekend before Thanksgiving for sophomores Kevin Colvin, Ryan Tixier and Dan Yerkes. The three participated in the Attica, Indiana, Tough Mudder, a murderous obstacle-course run that, since its inception in 2010 as a traveling adventure challenge staged in different cities throughout the year, has raised more than $2 million for the Wounded Warrior Project, a charity supporting injured and combat-stressed military veterans. “I’ll do it again, but not during November,” Tixier told The Observer. “There were too many ice water swims where your entire body just goes numb. If I did it again, it would be during the summer months and I’d get more guys from my dorm to do it.” Hmm. On second thought, Ryan, recruiting may be your biggest obstacle of all.