The Class of 2015 awoke on the Saturday morning before Commencement to the heartbreaking news that one of their own, William “Billy” Meckling, 21, a mechanical engineer and fencer from Centennial, Colorado, had died in a 35-foot fall from the rain-slickened roof of the Joyce Center. Meckling was reportedly climbing on the roof in the company of classmates at the time of the accident. Moments of silence punctuated ceremonies throughout the weekend. Those remaining behind Monday prayed a memorial Mass for Meckling at the Basilica of the Sacred Heart. . . . 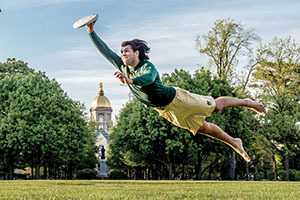 The self-proclaimed “Notre Dame Ultimate Family,” representing 25 years of organized but fun-lovin’ Frisbee play, laid out big time on Notre Dame Day — astounding just about everyone but themselves with the reach of their financial huck. Surpassed in late-hour balloting during the April 26-27 fundraising marathon only by the Glee Club, ND’s handlers and cutters drew 2,574 votes to pull in $38,417. Outgoing club president Peter Hall ’15 said the funds will boost the ND Ultimate Frisbee club’s nascent endowment, covering travel and tournament costs like those incurred by the Women’s A team when it went to the Division I national college tournament in Milwaukee in May and lost in the first round to eventual tourney champion Oregon. . . .

Lymphatic filariasis’ days in Haiti are numbered. So say Father Thomas G. Streit, CSC, ’80, ’94Ph.D., and the Notre Dame Haiti Program’s international collaborators. After three years of mass drug administration (MDA), tests of 850 children found no infections with the disfiguring, mosquito-borne disease, also known as elephantiasis, in a town where pre-treatment surveys had once shown an infection rate of 44 percent. Two more years of nationwide MDA are required under World Health Organization protocols, but Haiti is tracked to be LF-free by 2020. Learn more at haiti.nd.edu. . . .

Starting defender Eddie Glazener, seventh in an unbroken 20-year line of Irish men’s lacrosse bagpipers, led his teammates per custom onto Philadelphia’s Lincoln Financial Field while piping “Scotland the Brave” before the NCAA tournament semifinal versus Denver. “After I play the bagpipes, sometimes I feel like I got the toughest part out of the way,” the rising senior from La Jolla, California, told the Chicago Tribune. Aye, but the Irish lost the season-ender, their fourth Final Four appearance in six years, with amazing grace: an 11-10 overtime thriller on May 23. . . . 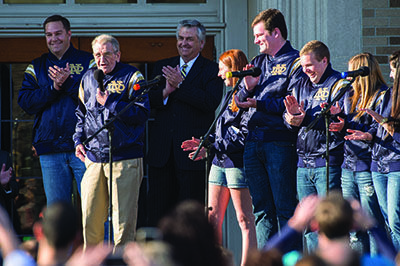 He had our attention during a sliver of Notre Dame home football games for some 55 years, but “Sgt. Tim McCarthy for the Indiana State Police” has retired, having delivered the last of his beloved second-half puns, quips and groaners. McCarthy’s legendary traffic safety messages contributed to a remarkably clean post-game sheet during that span. His final dispatch came at the unveiling of The Shirt in April. “And remember,” McCarthy told a delighted crowd outside the Hammes Notre Dame Bookstore. “Today it’s a little bit chilly, but wearing The Shirt makes you look hot.”