William Shakespeare scripted about three dozen plays, all written, reworked and refined by The Bard for performances throughout his lifetime. He didn’t publish many of those plays and produced no authoritative version of them before he died in 1616. But in 1623 two of Shakespeare’s fellow actors compiled 36 of his plays and published them in a 900-page volume, Mr. William Shakespeares Comedies, Histories & Tragedies, which has come to be known as the First Folio. It is believed that 750 copies were originally printed, of which 233 copies are known to exist. It is considered one of the most valued books in literature; a copy was sold at auction in 2001 for $6.2 million. The Folger Shakespeare Library in Washington, D.C., holds 82 copies, and to mark the 400th anniversary of the playwright’s death is lending the First Folio for exhibit at 53 U.S. sites — including Notre Dame. “First Folio! The Book that Gave Us Shakespeare” will run throughout January at the Hesburgh Library and will include a multipanel display and other informational features. At Notre Dame the book will be opened to the page where visitors may read one of the world’s most quoted lines, “To be or not to be.” . . .

It’s called a video board, not the dreaded J-word, but the electronic addition to Notre Dame Stadium for the 2017 season will be jumbo in size if modest in programming. Announced this summer, the new screen to be erected at the south end of the stadium will be 96 feet by 54 feet, with “ribbon” boards along the east and west sides. Fans will have a view of game information from those screens, allowing the north-end scoreboard to be removed for a better view of Touchdown Jesus. Officials say there will be no advertising associated with the video boards. Vice president and athletics director Jack Swarbrick said the benefits of the boards include “the ability to support game-day introductions and presentations with video elements, additional opportunities to promote the University, plus replays.” The video boards will be installed as part of the Campus Crossroads project, scheduled to be completed in August 2017. The $400-million project will add research, academic and student-life space in three new buildings adjacent to Notre Dame Stadium as well as premium seating and a new press box. . . .

The Archdiocese of Philadelphia invited submissions from architecture schools across the country for a sanctuary and altar design to be used September 27 at the outdoor Papal Mass on the Benjamin Franklin Parkway. Notre Dame’s James Lenahan ’15M.Arch. won the contest with a vision oriented around the World Meeting of Families, which coincided with the pope’s visit. Lenahan’s design incorporated triangular elements to evoke the Holy Family and cross-shaped supports that merged to represent a family united in Christ. “While no family is without challenges,” he said, “a family rooted in God has great potential for love, joy and fullness of life.” . . . 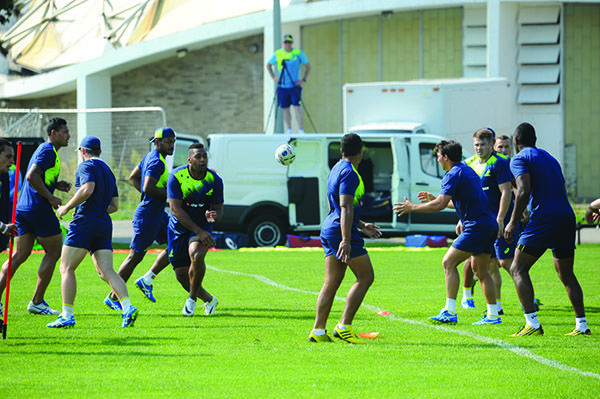 There were Wallabies on campus. Australia’s national rugby team spent two weeks in early September at Notre Dame preparing for the World Cup in England. The third-ranked team in the world (behind New Zealand and Ireland) practiced on fields near Stepan Center and used the training facilities at the Compton Family Ice Arena. “The Notre Dame campus is huge and the facilities are world class,” winger Joe Tomane told the Australian newspaper The Daily Telegraph. And Fighting Irish rugby coach Lonnie Heeter said the Australian team’s world-class talent left Notre Dame players “in awe at the speed and size.” The Wallabies’ support staff included global leaders in sports science and medicine who shared insights with their Notre Dame counterparts during the visit. Soon after the rugby team departed, the defending Stanley Cup champion Chicago Blackhawks returned to campus for three days of training camp for the third straight year. The National Hockey League franchise has built a dynasty with three titles since 2010 under general manager Stan Bowman ’95. . . .

On the first weekend after classes had started for the fall semester students received email alerts from the Notre Dame Security Police (NDSP). Two sexual assaults and one sexual battery — all three allegedly in men’s residence halls — had been reported. But this time, in one of the cases and in line with a new protocol developed over the summer, campus police immediately contacted the county prosecutor’s office, and a deputy prosecutor was dispatched to campus. NDSP still does the investigating, but the county prosecutor may confer with police and look for evidence to be used if the case goes to trial. In two of the cases — one an alleged rape and the other an alleged sexual battery — the complainants chose to alert University administrators but not law enforcement. In such cases the University is required to investigate the incident as a possible violation of Title IX, a federal civil rights law, and there is no police investigation under way as this issue goes to press. In the days following the reports, the student media carried a number of opinion pieces addressing the issues of sexual and alcohol abuse. And on the following Tuesday, September 1, students convened at the Grotto for a prayer service and spoke out against the continuing incidence of sexual assaults on campus. . . .

Students from low-income families may be able to put together a financial package that enables them to enroll at Notre Dame and meet their basic needs, but they often struggle to afford all that goes along with college life. So in early September the University announced a new program, the Fighting Irish Initiative, that will assist students from households with incomes of less than $50,000 to fully fund tuition and fees, room and board, books and transportation. The program also will provide for needs most students may consider routine, such as laptop computers and study abroad expenses. The program was established with a $20 million gift from Sean Cullinan ’88 and his wife, Sue, of Glen Ridge, New Jersey.