Notre Dame’s Academic Council voted on a new core curriculum in November, approving what University President John I. Jenkins, CSC, ’76, called the most significant changes in nearly 50 years. The new core, to be implemented in fall 2018 with the incoming Class of 2022, will continue to require all students to complete two theology and two philosophy courses — although the second philosophy requirement could be met with a course in a new category called “Catholicism and the Disciplines.”

Instead of two courses in both math and science (for a total of four), students will have to complete three courses that include one in quantitative reasoning, one in science and technology, and another from either category.

Broader choices will be incorporated into the history, social science and fine arts/literature requirements. Rather than one from each of those subject areas, the three required courses will be divided into: one in art, literature, or advanced language and culture; one in history or social science; and one “integration” course (or one from a subject not yet selected for the requirement).

Under the current system, according to the Core Curriculum Review Committee’s report, requirements often occupy much of a student’s first year. That has created a feeling among many toward the core as “a list of requirements to endure before being able to take courses in their primary area of interest.” The added flexibility of the new system is intended, in part, to offer students more freedom to explore.

It is also meant to shift the focus of core requirements from a series of introductions to unrelated disciplines toward “an integrated approach to the pressing issues and enduring questions students will grapple with after graduation.”

The increasingly impressive credentials of incoming students — the academic record of the average student admitted today exceeds the top tier from just a few years ago — was another factor in the changes. “A disconcerting number of students described the first-year curriculum at Notre Dame as insufficiently differentiated from their experience as seniors in high school,” the report noted.

Meeting a need students and faculty expressed for an “increased intellectual challenge” helped transform a routine 10-year curriculum review into a new vision for what forms the core of a Catholic liberal-arts education.

The Indiana Supreme Court ruled in November that the Notre Dame Security Police department is not a public agency under state law, allowing its records to remain private. Information about investigations and police reports need not be disclosed, as city, county and state law enforcement agencies are required to do. 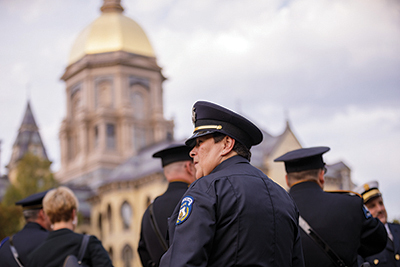 ESPN and reporter Paula Levigne brought the case in 2014 after being denied a request for campus police records related to investigations into student-athletes. Losing in local court, the network took the case to a state appeals court, which ruled in ESPN’s favor in March.

Notre Dame’s then appealed to the state Supreme Court, which said the campus police force did not fit the definition of a “public agency” according to Indiana’s Access to Public Records Act (APRA).

Attorneys for ESPN argued that Notre Dame officers perform the functions of public police forces, such as carrying firearms and making arrests, so the department should have the same disclosure responsibilities. But the higher court’s decision said the Notre Dame Security Police does not fit the law’s definition of agencies that are subject to disclosure requirements.

“The job of this Court is to interpret, not legislate, the statutes before it,” the unanimous opinion read. “Under APRA as it is currently written, the Department is not a ‘public agency’ under any of the three subsections identified.”

Of the 32 U.S. Rhodes Scholars selected from among nearly 900 who received their school’s endorsement as candidates, two come from Notre Dame. Seniors Christa Grace Watkins and Alexis Doyle will begin their Rhodes-sponsored studies at Oxford University in the fall.

Doyle, a biological sciences and international peace studies double major, serves as a research assistant on a study to devise ways to promote better food choices in school cafeterias. After a 2015 summer service project at a clinic in Guatemala’s Palajunoj Valley, she returned the following year to help low-income mothers there earn money through soap making. She also volunteers at a South Bend clinic and tutors elementary school students.

As a sophomore, Doyle was accepted to New York’s Icahn School of Medicine at Mount Sinai, which she will attend after completing her Oxford studies.

Notre Dame freshman Lexie Van Den Heuvel was diagnosed with celiac disease as a child. As she learned to manage the genetic autoimmune disease with a gluten-free diet, Van Den Heuvel realized that many children in her situation lack the information and resources to stay healthy.

Limited access to medical care leaves the condition undiagnosed for some, and many others can’t afford the relatively expensive gluten-free foods celiacs need to prevent intestinal damage. If it goes untreated, celiac disease can lead to other health issues, including migraines, infertility, early-onset osteoporosis and cancer.

At age 14, Van Den Heuvel started a foundation, Cutting Costs for Celiacs, to help mitigate the medical and financial disparities for children with the disease in her native Wisconsin. The organization distributes gift baskets to newly diagnosed patients with gluten-free foods — more than 1,000 pounds so far — coupons, recipes, and information about bakeries, restaurants and grocery stores that carry the items they need. Cutting Costs for Celiacs also provides gift cards to low-income families and sends an e-newsletter with coupons for gluten-free products.

With help from a scholarship from the Vincent L. Hawkinson Foundation, given to students who show a commitment to peace and justice, Van Den Heuvel’s foundation can continue its work as she pursues a degree from the Mendoza College of Business.

The Notre Dame football team had already lost seven games when the NCAA issued a ruling that would tag the program with 21 more losses, vacating wins from 2012 and 2013 because of academic violations. The University will appeal the punishment.

Misconduct by several players and a member of the student trainer program, which Notre Dame discovered in 2014, led to sanctions against those involved, including athletic suspensions, lowered grades and the denial of academic credit dishonestly earned. Four student-athletes were dismissed from the University.

The NCAA concluded that the implicated players were retroactively ineligible, requiring the deduction of wins they participated in, including all 12 from the 2012 team that reached the national championship game.

Because the University self-imposed punishments following an honor code investigation, and because only students were involved, Notre Dame argued that the NCAA ruling could encourage institutions to ignore academic violations.

“We believe that imposition of the vacation of records penalty without serious underlying institutional misconduct will not primarily punish those responsible for the misconduct, but rather will punish coaches, student-athletes and indeed the entire institution who did nothing wrong and, with regard to this case, did everything right,” University President John I. Jenkins, CSC, ’76 said in a statement announcing Notre Dame’s intention to appeal. “We are also concerned that establishing this precedent will infringe on universities’ autonomy in deterring academic dishonesty, for it will discourage the retroactive lowering of grades even when an honor code committee deems this appropriate.”