It’s a familiar image, based on former University photographer Bruce Harlan’s 1980 picture of Rev. Theodore M. Hesburgh, CSC, standing near the main circle, the leafy campus framing him with the Golden Dome over his shoulder in the distance. If there’s a single “presidential portrait” of Hesburgh, that’s it.

Artist Tim O’Brien and designer Ethel Kessler now have transformed the iconic Hesburgh likeness for a new purpose: a 49-cent forever stamp from the U.S. Postal Service. “The smile is subtle and the eyes are fixed ahead, capturing his benevolence and his determination,” said postmaster general Megan Brennan at the September 1 unveiling of the stamp in the Joyce Center’s Purcell Pavilion. 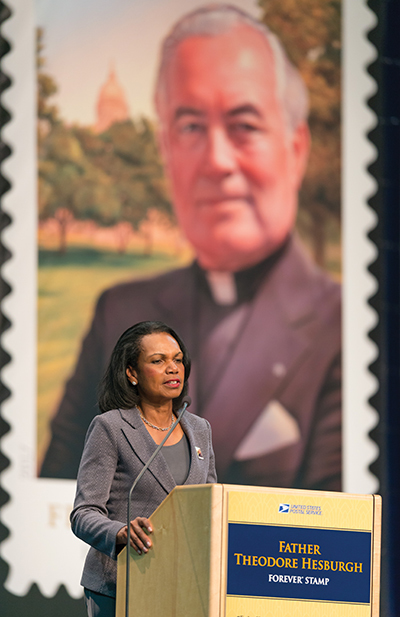 Speakers at the campus ceremony included Condoleezza Rice ’75M.A., the former Secretary of State and longtime friend of Hesburgh’s. Rice described Hesburgh as a leader who transcended labels, a living embodiment of universal values whose example inspired others, and even the nation itself, to fulfill its highest ideals. “He challenged America not to be something else,” Rice said, “but to be what it said it was.”

During his tenure as Notre Dame president from 1952 to 1987, and continuing until his death in 2015 at age 97, Hesburgh was a confidant of presidents and popes. He was known for his ability to engage people with conflicting interests in respectful dialogue, most famously as a member of the U.S. Civil Rights Commission in the 1950s and ’60s appointed by President Dwight D. Eisenhower — one of Hesburgh’s 16 presidential appointments.

Speaking at the stamp unveiling, Notre Dame President Rev. John I. Jenkins, CSC, ’76, ’78M.A. described Hesburgh as a man who built bridges that connected people of different personal backgrounds, political ideas and religious beliefs. “Bridges between people who are estranged, bridges between man and woman and God, bridges between nations, bridges between faiths,” Jenkins said. “His lifelong commitment to civil rights was an expression of that calling to be a bridge builder.”

In 1964, Hesburgh received the Presidential Medal of Freedom, and in 2000 he was the first representative of higher education to be presented with the Congressional Gold Medal.

The stamp, Brennan said, “is a lasting testament to his pioneering contributions as a champion of social justice, an advocate for international aid and an emissary for peace.”

Father Jenkins called on the federal government to maintain a policy that protects undocumented people who were brought illegally to the United States as children.

In September, President Donald Trump rescinded the executive action known as the Deferred Action for Childhood Arrivals (DACA) program, which protects undocumented children from deportation and allows them to pursue education and employment. Trump called on Congress to pass immigration reform to address the issue, but the administration’s revoking of the policy prompted Jenkins to speak out.

“A decision to discontinue DACA would be foolish, cruel and un-American,” he said in a written statement. “Foolish because it drives away talented people the country needs; cruel because it abandons people who have done nothing wrong and have known life only in the United States; and un-American because we have always welcomed immigrants to our land of opportunity.”

He added that Notre Dame would continue to support the approximately 40 students enrolled under DACA, even in the absence of legislation, and would provide legal assistance if necessary.

Jenkins had made his support for the program known before, joining more than 400 college and university presidents last year in signing a statement saying, “DACA should be upheld, continued, and expanded.”

For a week in June, 15 military veterans came to Notre Dame for boot camp. Not the type that would train them for combat, but one that would prepare them for college.

They were participants in the Warrior-Scholar Project, designed for veterans who have not completed a bachelor’s degree. Notre Dame is one of 15 participating universities. The 3rd and Goal Foundation of quarterback Brady Quinn ’07 funded Notre Dame’s program, which included classes with experts on U.S. government and democracy, writing workshops and study groups, all free for the ex-service members.

The return from active duty to civilian life can be difficult, and the project, which has expanded across the country since beginning at Yale in 2012, helps equip veterans for academic and social challenges ahead. They learn critical reading and writing skills, as well as keys to adjusting to campus life.

“Part of our goal is to make the transition into the civilian world as smooth as possible,” the project’s executive director Sidney Ellington told the South Bend Tribune. “Understanding that they’re heading towards higher education, understanding that it’s a vastly different culture than the one from which they’re coming out of.”

A species of mosquito that plays a major role in transmitting malaria in Africa likes to bite at night.

Bed nets treated with insecticide have become a common method of protecting people who are sleeping from the bugs. But the mosquitoes are developing resistance to insecticide, Notre Dame biologist Giles Duffield says, as well as adapting their behavior to bite earlier in the evening or later in the morning, “times when people are not in bed and therefore not protected by a net.”

Once an efficient and effective means of prevention, the nets alone no longer suffice. In June, the journal Parasites & Vectors published research on a promising new approach from Duffield and colleagues. They found that exposing mosquitoes to 10 minutes of pulsing white light reduced their propensity to bite for hours.

The researchers used pulses instead of constant light because the mosquitoes would be less likely to adapt to infrequent flashes. Short light treatments had a “prolonged effect” on the insects, Duffield says, suppressing their propensity to bite for as long as four hours. Several brief exposures periodically applied throughout the night could significantly reduce biting.

The researchers are testing other light wavelengths that would be less disruptive to people during sleep in an effort to advance the method toward practical use as a complement to existing forms of prevention. 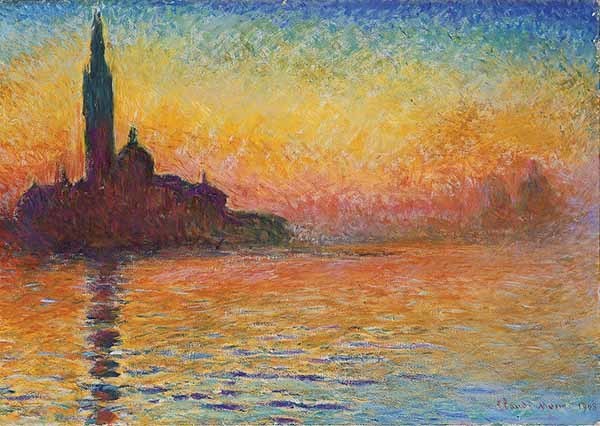 Josh Erickson ’17 studied environmental engineering at Notre Dame. He also is familiar with the serene natural landscapes in the paintings of Claude Monet.

He used Photoshop to transform Monet’s renderings of natural beauty into depictions of pollution. Into The Water-Lily Pond he inserted a sewage pipe spilling waste into the water. The monastery steeple in San Giorgio Maggiore at Dusk became a smokestack, the sunset colors obscured with smog.In a class last spring, Professor Diogo Bolster asked students to do a creative project related to the technical topics they studied. Erickson’s interests overlapped perfectly for the assignment. 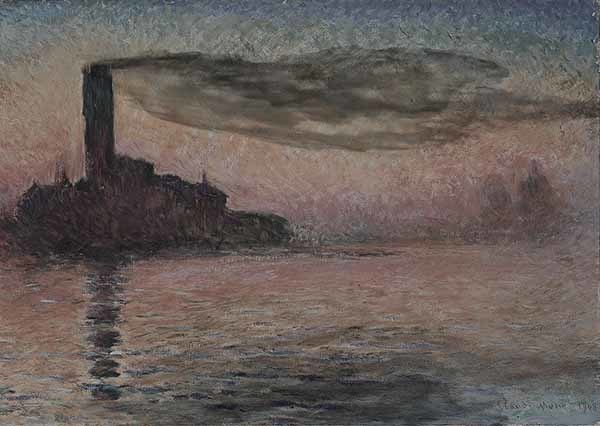 The resulting disparity between Monet’s images and Erickson’s representations of the industrial impact on the landscapes “struck me in a particularly powerful way,” Bolster said in a news release from the Environmental Change Initiative.

Erickson intended the contrast to be jarring, to inspire some unease about the effect of technological progress on the natural world.

“Monet’s paintings bring out the general serenity and beauty of nature,” he said, “and by disrupting that, it kind of makes the viewer a bit uncomfortable.”

Among campus construction projects, the Charles B. Hayes Family Sculpture Park was overshadowed — almost literally — as huge new buildings rose around it. Situated along Angela Boulevard on the southern edge of campus, the park is close enough to the Campus Crossroads adjacent to Notre Dame Stadium and the School of Architecture’s in-progress Walsh Family Hall to be easily overlooked.

The location connects the sculpture park both to those and other nearby buildings focused on the arts and to a sweeping campus green space that serves as a bridge between Notre Dame and the South Bend community.

An August 25 ceremony marked the reopening of the park, which features a dozen works along paths that wind through an expanse of green space surrounding a pond between Eddy Street and Joyce Drive. It’s part of a budding campus “arts district” that includes the DeBartolo Center for the Performing Arts, Walsh Family Hall and the new O’Neill Hall at the south end of the stadium, which houses the Department of Music and Sacred Music at Notre Dame.

The landscape features rolling topography due to its past as a landfill. Park curator Charles Loving, director of the Snite Museum, asked landscape architect Michael Van Valkenburgh to envision what the area might have looked like before Notre Dame’s founding. The park’s theme, “Reclaiming Our Nature,” speaks to the goal of reimagining its natural environment, as well as the spiritual dimension of the works on display, representing the human quest for transcendence.

They’re about the same shade of green as those late 1970s football jerseys and trimmed in bright yellow. So you can’t miss them. They also seem to be everywhere, crisscrossing the campus since August when Notre Dame began a partnership with LimeBike, a dockless bike-sharing program.

Download the app, enter your information and for a dollar per half-hour (50 cents if you register with an nd.edu email address) you can unlock a LimeBike and ride it anywhere you like.

Because there are no docking stations, you can leave the bike any place. Just remember to lock it to end the ride or the meter will keep running.

A tracking system lets you know with a glance at the app where to find the nearest bikes (their locations marked with little limes). There are 175 LimeBikes on campus, with more available at Saint Mary’s, Holy Cross and throughout the city of South Bend.

The downside is that the availability and convenience of the bikes limits potential excuses to be late to class or a meeting on campus.