The Most Rev. John Michael D’Arcy, the bishop emeritus of the Diocese of Fort Wayne-South Bend whose near quarter-century tenure as the shepherd of northeastern Indiana’s Catholics spanned the terms of three Notre Dame presidents, died February 3, one month after announcing he had been diagnosed with lung and brain cancer. He was 80.

Installed as bishop in 1985, D’Arcy earned his reputation as a courageous and loving pastor who championed causes as seemingly disparate as the rigorous screening and formation of seminarians, Catholic education, and the rights of immigrants. After the sex-abuse crisis unfolded in 2002, D’Arcy was hailed by the National Review Board as a “voice in the wilderness” who, as an auxiliary bishop in Boston, had written unequivocally against the parish reassignment of a child predator and, upon the bishop’s arrival in Indiana, had instituted strict accountability guidelines for clerical misconduct.

D’Arcy famously loved Notre Dame, often celebrating Mass on campus, confirming hundreds of students in the faith and presiding over the ordinations of many Holy Cross priests. But he wasn’t afraid to criticize the University for decisions he considered contrary to the Church’s teaching authority, such as its honoring of abortion-rights supporters Sen. Daniel Patrick Moynihan, who received the 1992 Laetare Medal, and President Barack Obama, who received an honorary doctorate of laws degree in 2009. D’Arcy attended every commencement during his episcopacy, save in those two years, though his preaching was a fixture at 25 Baccalaureate Masses during both the homily and in impromptu remarks after Communion, when he often delivered his trademark line, “There you have it: Two good homilies for the price of one.” 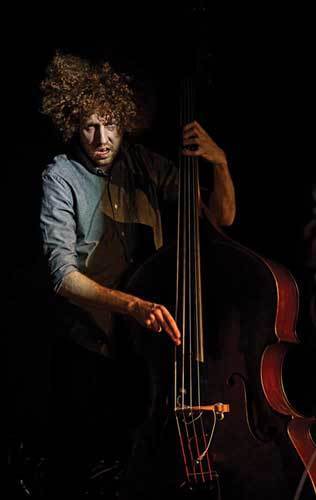 Combine a French guitarist/composer with a punk rock/reggae drummer, a classically trained bassist and a country-music rhythm guitarist, and you’ve got uniquely inspired music called gypsy jazz, a specialty of Stephane Wrembel and his band. The group performed at a packed Legends for Mardi Gras. Wrembel, the composer of the theme for Woody Allen’s Midnight in Paris (2011), which won a Grammy for best compilation soundtrack, draws influences from French gypsy tunes, traditional jazz and rock to tell wordless stories of Japanese tsunamis, DNA and, occasionally, France.

Squeezing water from a rock might not be such an absurd idea after all, if the rock in question is the moon. Liquid water can’t exist in the lunar atmosphere. But a new analysis of moon rock collected by Apollo astronauts more than 40 years ago, led by Hejiu Hui, a postdoctoral research associate in Notre Dame’s Department of Civil and Environmental Engineering and Earth Sciences, detected measurable amounts of water substructures called hydroxyls in the chalky, white-gray Apollo samples. Those samples, believed to be part of the nascent moon’s outer crust, seem to confirm the presence of water in the “lunar magma ocean” that composed most of the moon as it was forming over 4 billion years ago. That leaves us with the possible picture of a young moon with a wet surface. It also challenges the leading theory of lunar formation, which suggests the moon was born from Earth’s collision with another astronomical body the size of Mars, since such an impact would presumably have shaken off all surface moisture. What’s more, even at the 6 parts per million found in the rock samples, some commentators wondered aloud whether there might have been enough water up there to support lunar habitation.

For the first 39 minutes of the five-overtime, 104-101 men’s basketball victory over conference rival Louisville on February 9-10, junior guard Jerian Grant may have wished he was senior finance major Casey Murdock. Grant was scoreless and his team had looked equally lifeless, trailing by 8 with 45 seconds left in regulation when he hit his first three-pointer of the night. Grant would drain two more threes and convert a foul into a three-point play in the next 29 seconds, leading the Irish on a 12-4 run that eventually set up the epic, after-midnight home win over the Cardinals. Hours earlier, sporting a green headband, Murdock had warmed up the Irish faithful for a big night during the ESPN College GameDay pregame show, needing only six of his allotted 18 seconds to find the net from half court and win $18,000 — one dollar for every State Farm agent in the country — in the State Farm Half-Court Challenge. It was only the fourth time a student has hit the low-percentage shot in the promotion’s seven-year history. Murdock later said that even better than the giant check was being the center of the ensuing mob scene which included members of the basketball team and GameDay host Rece Davis — the first of two times the Purcell Pavilion floor would be swarmed during ESPN’s marathon broadcast.

The Basilica of the Sacred Heart is the most beautiful college “cathedral” in the world, says Best College Reviews (BCR). Like most of the 30 churches and chapels featured on the website’s ranking, the basilica isn’t technically a cathedral, the seat of a bishop. But it did have to beat out some rather glorious competition from 14 states and five foreign countries, including the honest-to-goodness cathedrals of Toledo and Santiago de Compostela in Spain and some American beauties like the Stanford Memorial Church and Yale’s Battell Chapel. BCR liked the basilica’s neo-gothic elements and natural light, and noted it is available “for what must be incredible weddings.” Well, yes, it is. 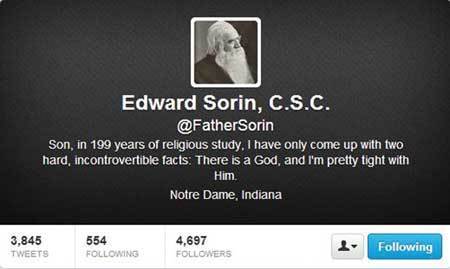 He traveled to Miami in January, conveys an up-to-the-minute knowledge of South Bend weather and dining-hall fare, and is a big fan of Fighting Irish basketball. Father Edward Sorin, CSC, the long-deceased founder of Notre Dame, is on Twitter. Since 2011, @FatherSorin has tweeted nearly 4,000 times about all things Notre Dame with a consistently paternal 19th century voice and a firm command of campus history. Nothing escapes him: not single-digit temperatures (Jan. 22: “It’s so cold, St. Mary’s College just moved closer for warmth”), not the five-overtime men’s hoops win over Louisville (Feb. 10: “Students, if parietals go into effect during this game — girls to the left side of the arena, boys to the right”), not historic events in the Catholic Church (Feb. 11: “This might be the first time a German ever voluntarily surrendered”). And no one is revealing who’s impersonating the French cleric. His Twitter bio simply reads, “Son, in 199 years of religious study, I have only come up with two hard, incontrovertible facts: There is a God, and I’m pretty tight with Him.”

A brimming bowl of curdled sea-turtle blood, a giant spider crawling on your head, missing an ill-fated canoe trip that resulted in the deaths of all five passengers in a shark-infested expanse of the Indian Ocean: These are not the occupational hazards of your typical Notre Dame professor. Agustin Fuentes, for better or worse, has endured all of them. The primatologist was recently featured in National Geographic’s online Explorer Moment of the Week, describing his experiences as a monkey-watcher par excellence in field locations as diverse as Morocco and Bali. The interview, available at nationalgeographic.com by searching “Agustin Fuentes,” reveals the professor of anthropology’s admiration for the “real” Indiana Jones, his forthcoming participation in NatGeo’s Crittercam video series with macaque monkeys he’s studying in Singapore, and his recent efforts to take up the guitar as a kind of research tool.

Beer drinkers and foodies, raise a glass to South Bend’s old State Theater. The vintage movie house at 216 South Michigan closed in 1978, served briefly as a nightclub and — badly in need of renovation — has been in limited use since. But with $20,000 of his own money and the support of Downtown South Bend, Notre Dame’s Gigot Center for Entrepreneurship, current ND business students, private investors and community leaders, Drew Elegante ’12MBA is renovating the building while realizing his vision of a brewpub. The first phase of South Bend Brew Werks, a home-brewing and wine-making supply shop, is already open for business, with plans to start brewing beer on premises later this spring. To learn more, visit thestatesb.com and sbbrewwerks.com.

Coming this fall to a Catholic school near you, the Alliance for Catholic Education is celebrating its first 20 years with a cross-country bus tour. “We hope to draw greater attention to the amazing legacy and bright future of these schools that form engaged citizens and advance the common good,” said ACE co-founder Rev. Timothy Scully, CSC, ’76, ’79M.Div. The tour kicks off in October, makes a campus stop on the weekend of the Navy game to commemorate the first ACE recruiting meeting on November 4, 1993, and will visit parish schools in nearly 50 cities from Boston to Los Angeles in four trip legs that are set to conclude the following May.