Things we know from the University’s May announcement of a six- to nine-month feasibility study of a “reimagined” Notre Dame Stadium:

1) the University has its eyes on the stadium as a year-round destination for students and visitors in an increasingly pedestrian-friendly campus and is looking at such urban ballparks as Boston’s Fenway Park and Chicago’s Wrigley Field for ideas;

2) the ideas presented as a starting point include classroom space, at least 3,000 new “premium” stadium seats and the preservation of current views of Touchdown Jesus;

3) given the stadium’s possible use as a mecca for student life, Stepan Center will live to shine another day.

The days had appeared to be numbered for Stepan, every Domer’s favorite example of Collegiate Geodesic architecture, which recently was thought to be standing on the future site of a new student center building. But its distance from most residence halls and its continuing usefulness for events from Frosh-O to final exams to the annual ROTC pass-in-review caused administrators to look elsewhere while trying to meet the need for a central student hangout.

Meanwhile, things we don’t know about the future of the House that Rockne Built? The costs or timeline of the ideas on the table, or whether a Jumbotron or the replacement of grass with FieldTurf are among them. . . .

Blessed Pope John Paul II “is a saint; he’ll be recognized before long,” in the judgment of Notre Dame’s Anthony Pagliarini. The theology doctoral candidate is becoming a regular guest on HuffPost Live panel discussions, including one that was prompted by the Vatican’s April announcement of a second medical miracle attributed to the intercession of the Polish pontiff, who died in April 2005. The conversation, available online at huff.lv/159JLG4, covered the record-setting pace of John Paul’s case for sainthood and the role that politics and miracles — and their review — play in adding a holy person to the Church’s official list of saints. The Congregation for the Causes of Saints must yet sift all the evidence for Pope Francis’ final verdict, word of which is expected on JPII’s feast day, October 22. . . .

Incoming freshmen must now pass more than the traditional swimming test. As of last autumn, students are required to partake in two fitness assessments, one in the first week of classes and a second the following April. The exam consists of pushups, sit-ups, a 1.5 mile run and a sit-and-reach flexibility assessment. Students who test into the bottom 10 percent on the first exam will be expected to take a Foundations of Fitness unit that will address nutrition, self-esteem, disabilities and the importance of physical activity, says Steve Bender, visiting assistant professional specialist for physical education and wellness. Students who place higher will be encouraged to use their data to analyze personal weaknesses and choose classes in the PE curriculum to help them improve their results. According to the PE website, the purpose of the tests is to assess fitness levels, encourage a healthy lifestyle and provide data for students and instructors. . . .

The negative thoughts that lead a person to focus on troubles, perceived failures and sadness, and to worry about their implications are a major risk factor for depression and can be as contagious as the common cold, a recent Notre Dame study found. Depression is thought to be on the rise among U.S. college students; the National Institute of Mental Health cites a 2011 paper in which 30 percent of college students reported feeling “so depressed that it was difficult to function” at least once in the previous year. The survey-driven Notre Dame study of 103 pairs of randomly selected ND freshman roommates found that those assigned to partners with a high level of “cognitive vulnerability” to unhealthy thinking were likely to “catch” that way of thinking and become more vulnerable to depression themselves. “How one thinks about life stress and negative moods is one of the best predictors that we have of future depression,” the study’s lead author and Notre Dame associate professor of psychology Gerald Haeffel told Time magazine. Healthy thinking can also be contagious, the study notes, but it did not determine how opposing styles of thought dominate or influence each other. . . .

The Morris Inn, age 61, closed last fall, took an epic beating from a wrecking ball and is scheduled to re-open, larger and more comfortable than before, on August 29 — just in time for the football season opener against Temple. The new Morris will be nearly twice as spacious as the old and will feature a 300-seat ballroom, conference space, 56 additional guest rooms with campus views and iPads for guests’ use, an outdoor patio and garden, a refurbished Sorin’s restaurant and the new Rohr’s Irish Pub. . . .

He thought he had two years of hard work and waiting in order to become a Navy chaplain. It turned out to be more like 70. In April, Rev. Theodore M. Hesburgh, CSC, was designated an honorary chaplain of the U.S. Navy by Rear Admiral Mark Tidd during a ceremony in the Hesburgh Library auditorium. Tidd said he could think of no one more deserving than Notre Dame’s 15th president, “who has answered the call to serve our nation, the call to serve the world, and the call to serve God.” 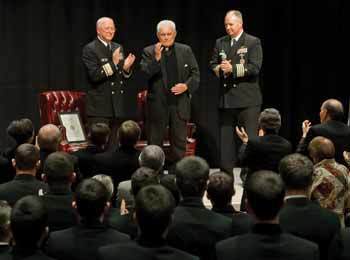 In 1943, at the height of the Second World War, the newly ordained Hesburgh petitioned his provincial superior asking permission to volunteer for service. He wanted to work on an aircraft carrier in the Pacific. But Father Thomas Steiner, CSC, insisted Hesburgh complete his doctoral work in theology. Sure enough, Hesburgh met his self-imposed two-year deadline on March 1, 1945, but Father Steiner sent him instead to Notre Dame to meet a faculty shortage. Within six months the war was over. Hesburgh, who turned 96 on May 25, would go on to serve as chaplain for veteran students and their families. “I can feel even closer to our Naval ROTC students here at Notre Dame now that I am an officer in the Navy,” he told the Carey Auditorium crowd, which included the full battalion of current ND midshipmen. “I will cherish this and I hope I will continue to serve the Navy as well as our country in every way possible. Anchors aweigh.”

Three days before his birthday, Hesburgh was feted again, this time at a party celebrating both his birthday and the 70th anniversary of his priestly ordination. That gathering was co-hosted at the U.S. Capitol by House minority leader Nancy Pelosi and Speaker John Boehner. . . .

“My dad graduated from ND in 1984,” begins the most popular anonymous confession posted to the meteorically modish ND Confessions page in its first month on Facebook, “and he is the one responsible for the ‘non-carnivorous’ specification for pet fish in dorms. He and his quadmates had a piranha aquarium. They hosted ‘feeding parties.’” Jack Hawley, a senior finance major from Los Angeles, created the Facebook page that, in its first 50 days, picked up 5,000 “likes” and had attracted almost 900 entries about things people had experienced or witnessed around campus. The confessions, submitted to Hawley via an anonymous Google form, cover everything from relationships to admissions of depression and drinking mishaps to sketchy course-registration strategies to annoying classmates. Everything gets posted as long as no sensitive information is included or crime is described. There’s no telling whether any of it is actually true, of course, though duLac does in fact specify that noncarnivorous fish are the only pets permitted in students’ rooms — in aquarium tanks of less than 30 gallons.