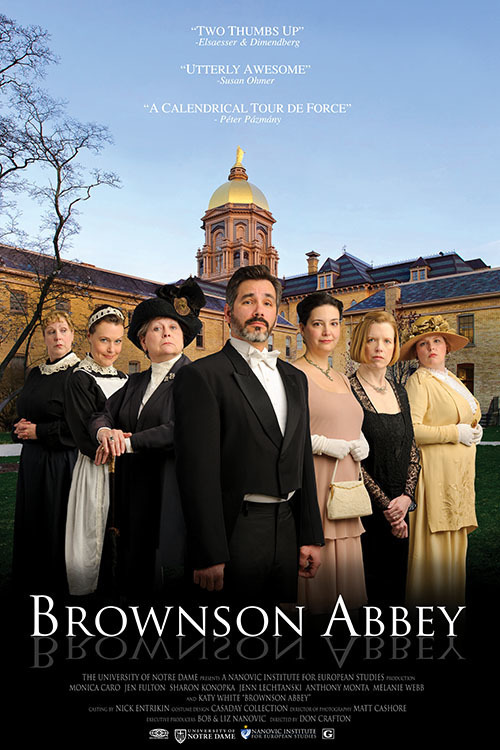 Brownson Abbey may not be playing on PBS anytime soon, but the mock poster did make quite the parting gift for the Nanovic Institute’s interim director, Don Crafton. When he joined the Nanovic staff, the Joseph and Elizabeth Robbie Professor of Film, Television, and Theatre had the idea to run local television ads for the institute during the popular show Downton Abbey. Playing on Crafton’s concept and love of film, the Nanovic staff, led by events coordinator Melanie Webb and with masterful Photoshopping by Matt Cashore ’94, created a poster starring themselves in period attire in front of their office building, Brownson Hall, as a thank-you for Crafton’s leadership. . . .

Undocumented students will now be welcome at ND, the University announced in August. A policy change made it possible for academically qualified undocumented students not only to be admitted but also to receive aid in accordance with demonstrated financial need. The new applicant pool was expected to “strengthen our incoming class and give deserving young people the chance for a Notre Dame education,” says Don Bishop, associate vice president for undergraduate enrollment. . . . 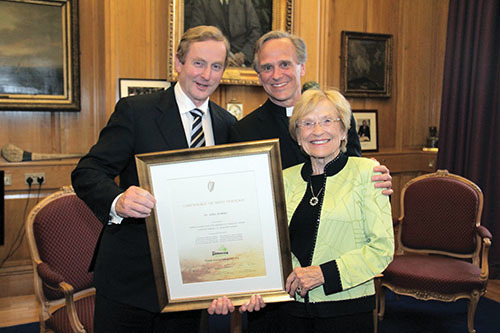 Kiss me, I’m Irish. As if being the president of Notre Dame didn’t make him Irish enough, Father John I. Jenkins, CSC, ’76, ’78M.A. was awarded a Certificate of Irish Heritage by the Irish Taoiseach (prime minister), Enda Kenny, this fall. The family’s lineage traces back to County Cork, Ireland, until the family emigrated in 1847. A sixth generation Irish-American, Jenkins and his mother, Helen Condon Jenkins, made a trek back to their homeland to receive the award. The meeting was arranged by trustee emeritus Martin Naughton and his wife, Carmel, who, along with Kenny, would like to enhance relationships between Ireland and Irish-Americans. . . .

Your college degree may help you live longer, says a study titled “The Effect of College Education on Health” by Notre Dame economists Kasey Buckles, Andreas Hagemann and Abigail K. Wozniak along with researchers from North Carolina State University and the University of Chicago. According to the study, which considers factors such as health insurance, earnings and health behaviors including smoking, exercise and obesity, the completion of a college program comes with a 28 percent reduction in early mortality with fewer deaths from cancer and heart disease. The report, which is part of the National Bureau of Economic Research Working Paper Series, is the first to estimate the statistical impact college completion could have on mortality rates. It suggests that policies which encourage advanced degrees could also inadvertently improve health. . . .

The Stanley Cup-winning Chicago Blackhawks planned to open their 2013-14 training camp on campus at the Compton Family Ice Arena. From September 12 to 15, the team was to hold practices under the eye of Vice President and General Manager Stan Bowman ’95. “Opening camp on the road offers our players and coaching staff a unique team-bonding atmosphere,” he said. “We look forward to bringing Blackhawks hockey to our fans in Northwest Indiana.” . . . 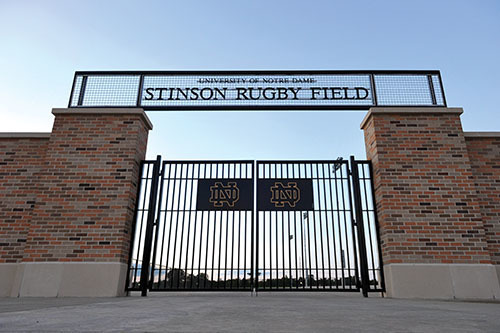 Upon a return to campus, you may notice some changes, the first being the full-sized rugby pitch gracing the northeast corner of campus. The Stinson Rugby Field hosted an inaugural intersquad scrimmage on August 31 and in the future will also be used by intramural sports and summer camps. Though a club team, the men’s rugby squad did just launch one of its alumni into the professional rugby world. Nick Civetta ’11 recently signed with Lazio of Italy’s top league, Eccellenza. He started full-time with the club on August 1. . . .

Take a whiff of Notre Dame by spritzing yourself with the newly released “Gold” for men or “Lady Irish” for women. Developed by Steiner Collectibles and The Cloudbreak Group, creators of scents for the New York Yankees and Boston Red Sox, the smell of school spirit also will be available in shower gel, lotion, body wash and aftershave. Yankee Candle is joining the smell circuit, too, and has recently launched an ND candle, “Lucky Shamrock,” which smells like “the fresh scent of lush, green hills kissed by a sparkle of sunshine.” Their description, not ours. . . .

A new stadium security policy restricts what fans can bring into the game. The rule, which went into effect August 31, prohibits backpacks, duffel bags and large totes. “Our top priority is safety, and we believe that in the wake of the Boston Marathon bombing and other incidents through the years, this new policy is the prudent course of action,” said Michael Seamon ’92, ’94MBA, associate vice president for campus safety and director of game day operations. Smaller bags and purses will still be allowed but will be inspected by security personnel. You’ll notice improved pedestrian safety in the JACC parking lots, too. Sidewalks have been added throughout, replacing vital tailgating space.