South Bend is back in business — the business of moving people about, that is. It took more than 50 years, but part of the footprint left in the local landscape and economy by the closing of the Studebaker Corporation’s flagship auto plant will soon be filled by aircraft engine components. In June, the University and General Electric announced a $36 million collaboration with the city, the state of Indiana, Indiana Michigan Power and a local commercial real estate developer to create the Notre Dame Turbomachinery Facility, a one-of-a-kind applied research laboratory. Led by ND aerospace engineering professors Scott Morris and Joshua Cameron, ND Turbo will test the turbines used in the aviation, electrical power and oil and gas industries. The project represents a massive expansion of an existing research partnership between Notre Dame and GE, the world’s largest jet engine maker, to improve the power and efficiency of its products while reducing noise and emissions. To date, this work takes place at White Field on the north side of campus. ND Turbo is expected to be fully operational in 2016 at its five-bay building on the old Studebaker site, now an emerging technology incubator called Ignition Park, three miles south of campus in the city. It is expected to create 120 jobs through direct employment and related hiring by local businesses while generating $15 million annually in new research. The benefits are multilateral. “This is a big deal for us because it allows us to test some things we’ve never been able to test before,” says Rick Stanley ’80, vice president of GE Power and Water. . . . 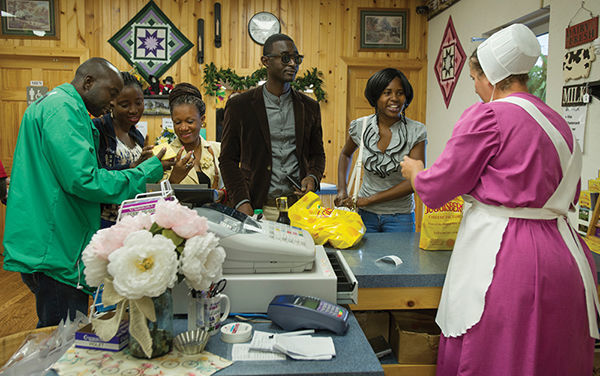 Entrepreneurship was the focus this summer for 25 young African leaders who spent six weeks at Notre Dame taking classes at Mendoza and diving into local business and culture. The Mandela Washington Fellows, 14 women and 11 men, represented 17 sub-Saharan nations and included the creator of a women’s gym in Uganda, the CEO of an ice-machine manufacturer in Burkina Faso and a filmmaker from Kenya. Notre Dame, through its Initiative for Global Development, is one of 20 U.S. universities to host the U.S. State Department program, which seeks to “spur growth and prosperity, strengthen democratic governance, and enhance peace and security across Africa.” The group’s activities also included a visit to Chicago’s IBM Innovation Center, a Cubs baseball game, community service in South Bend and a cheese-buying foray into Amish country. . . . 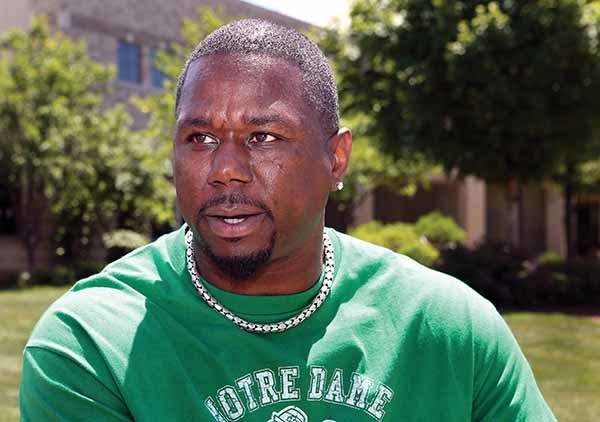 Ricky Watters boasts a Super Bowl ring and a successful business career among his accomplishments, but the star wide receiver on the 1988 Fighting Irish national championship football team returned to campus this summer to patch one hole in his resume: the completion of his Notre Dame degree. The former architecture student took ceramics and a liberal studies course that covered Dante through Don Quixote as he worked toward his graphic design major. Watters brought his family with him, giving his son, Ricky Jr., the chance to showcase his talents as a singer, guitarist and keyboardist at Fiddler’s Hearth, a popular downtown pub. At an open mic night in July, the younger Watters, 13, played a five-song set that included “Hotel California,” the current hit “Demons” by Imagine Dragons and the musician’s personal favorite, Del Shannon’s “Runaway.” . . .

Ten million square feet under roof, or about one and a half Pentagons, was the campus milestone Notre Dame passed last year with the renovation and expansion of the Morris Inn. University Architect Doug Marsh ’82 says the campus’ total building area is already more than three times larger than it was in 1950 at the dawn of the Hesburgh era. Now the University is bracing for another growth spurt over the next three years: the construction of a research complex, two residence halls, the Campus Crossroads project around Notre Dame Stadium and the erection of new homes for architecture, political science, sociology and the future School of Global Affairs. . . . 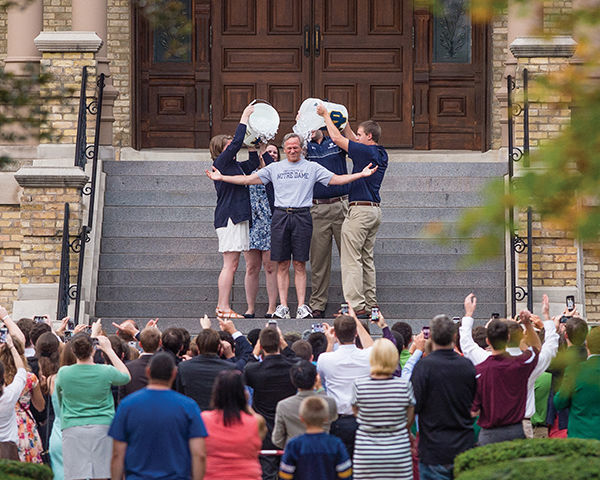 With arms outstretched and a smile on his face, University President Rev. John I. Jenkins, CSC, accepted the ALS Ice Bucket Challenge on the Main Building steps from leaders of O’Neill and Farley Halls when students returned for orientation. The challenge rippled across campus in late August, soaking numerous University officers and student leaders, who, in the spirit of the ALS Association’s wildly successful effort to raise money for the fight against amyotrophic lateral sclerosis, or Lou Gehrig’s disease, made their donations to ALS research in the College of Science. . . .

Catholics eat right, according to an analysis of takeout order data published by online food service GrubHub and the national student magazine Spoon University. Georgetown and Notre Dame ranked No. 1 and No. 2 on the study’s short list of the most “health-conscious” campuses. . . .

The Notre Dame Shakespeare Festival celebrated its 15th year as well as the Bard’s 450th birthday with a production of Henry IV. According to Film, Television and Theatre Professor Mark C. Pilkinton, the popular history play was staged in whole or in part 11 times — more than any other Shakespeare drama — in the University’s first 100 years, including the first full performance of any of Shakespeare’s works on a Notre Dame stage in 1864. . . . 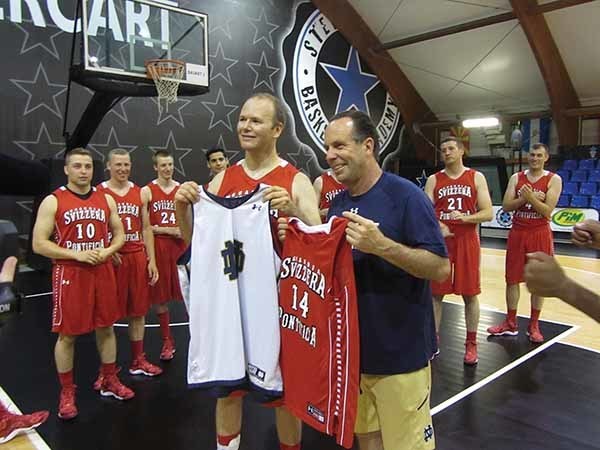 Halberds and helmets aren’t part of the Pontifical Swiss Guard’s defensive strategy, at least where basketball is concerned. On Day 2 of its 10-day goodwill trip to Italy in August, the Notre Dame men’s team received a rare tour of the 508-year-old Vatican military company’s barracks, then traveled 20 minutes across town for a practice at Rome’s Stella Azzurra Basketball Academy, where they presented their hosts with bright red uniforms provided by UnderArmour. The Irish went 4-0 during their Italian bonding experience. Their toughest competition came from the professional Adriatic Sea Tritons, whom they defeated 90-59. . . .

How much are low-income families really paying to send their children to elite colleges? Journalists Beckie Supiano and Soo Oh of The Chronicle of Higher Education used Notre Dame to answer that question through a web infographic illustrating what they call “the problem with government affordability data.” Check it out at chronicle.com/article/Are-Poor-Families-Really/148001/. . . .

Trekking to Chhoser, a remote Himalayan village in the Mustang District of Nepal, to restore frescoes and paintings in its old Buddhist monastery is what architecture Professor Krupali Krusche did this summer. Just getting to the village, where money rarely changes hands, took four days, mostly on foot. Krusche, a preservation expert whose work on the Roman Forum and Taj Mahal has earned international renown, led a team of monks and American health professionals who were working alongside villagers on a sustainability plan to address their water, electricity, sanitation and economic needs as well as the restoration of the cloister retreat. They will return next summer to implement it. . . .

The lone horseman of the Apocalypse who trotted into the football team’s practice at Indiana’s Culver Military Academy on August 8 was coach Brian Kelly. Whether Kelly meant to evoke Rockne, or Lou Holtz, whose teams also practiced at Culver, or the peppery inspirational style of General George S. Patton, for whom his horse was named, wasn’t clear, but he pointed out that his team faces two prominent opponents with mascots on horseback — Florida State and USC. Sportswriters took turns at wisecracks. One had hoped Kelly would quote the film Gladiator: “At my signal, unleash hell!” But players say both rider and mount, representing Culver’s Black Horse Troop that has marched in 16 presidential inaugural parades, maintained a dignified air.