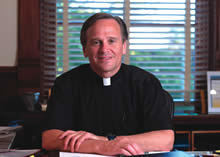 Truman likened being president to riding a tiger. Texan Lyndon Johnson compared it to the plight of a donkey in a hailstorm: “There’s nothing to do but stand there and take it.” Fortunately, the presidency of a university brings many rewards along with the travails of leadership. Last spring Notre Dame’s Class of ’09 named the Rev. John I. Jenkins, CSC, ’76, ’78M.A. its Senior Fellow. In October, the Board ot Trustees elected Father Jenkins to a second five-year term as Notre Dame’s 17th president, effective upon the completion of his first term on June 30. In a separate resolution, the University’s Fellows said Father Jenkins has “combined courageous leadership with the kind of priestly dedication, pastoral concern and inspiration that we have come to expect of a president of Notre Dame.” . . . If there’s a lifetime achievement award for the most dedicated Irish football fans, James Malooly ’55 has earned this nomination. Malooly was 8 when he attended his first game — a 3-0 win over Purdue — in 1939 near the end of the Elmer Layden era. The Chicago real estate agent has attended at least one game a year since, even during those years when his Navy service delayed the completion of his commerce degree. Lately, Malooly attends most home games, most recently the October 24 win over Boston College. We’d like to hear your tales of devotion to any of the school’s 24 varsity programs, too. Write us at ndmag@nd.edu. . . . Irish basketball has a sparkling new home. The men’s and women’s squads opened the Purcell Pavilion at the Joyce Center with exhibition wins in early November. The rehabbed JACC trades in a net 2,000 seats for more comfortable posterior accommodations and a VIP club, but the most noticeable change for first-time visitors may be the improved lighting. “I didn’t realize how dark the old place was,” men’s coach Mike Brey told a tour group in October. . . . Dress for spring glory, bring an umbrella, but plan to come either way if someone you know expects to graduate from Notre Dame in May. Starting this year, commencement will take place in the football stadium on Sunday morning, allowing graduates to invite pretty much everyone they know. The change of venue was due in part to the lost seating capacity in the JACC, which significantly limited the number of family members who could attend there. Plans for the weekend set the graduate and professional school ceremonies and the Commencement Mass on Saturday. Seniors will receive handshakes, diplomas, cheers and awards in separate college and department platform ceremonies on Sunday afternoon. . . . Future Domers may be the primary audience for a pair of new media offerings at the University’s website, but all Domophiles — real and potential — will benefit from recent launches of a virtual campus tour and ND’s point of entry to Apple’s iTunes U. At tour.nd.edu, visitors will find Matt Cashore ’94 photos and panoramas, and take video strolls through more than two dozen campus landmarks from the Grotto to the stadium to the new Geddes Hall, each led by a different student guide from the Office of Admissions. The iTunes U site aspires to be the world’s leading source of free educational media. In this case it means downloadable audio and video podcasts that showcase Notre Dame’s unique academic community through lectures, events and performances, profiles of faculty and research initiatives, the “What Would You Fight For?” TV ads and miscellaneous gems like the greatest play of the Charlie Weis era. The clips are available through iTunes.nd.edu and require the installation of iTunes software. . . . 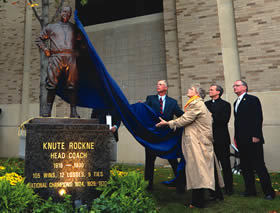