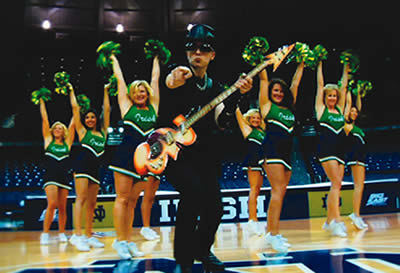 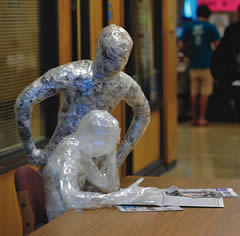 largest in their respective histories. . . . Stressed-out students on the library’s 12th floor during the last week of classes aren’t newsworthy, of course, unless they’re fashioned out of plastic wrap and packing tape. A librarian found a sculpture of two such figures, one hunched over a study carrel and the other standing nearby, and brought them downstairs, thinking they were a practical joke. In fact they were the work of freshman Bre Stachowski and sophomore Jenna Spizzirri, students in Professor Molly Morin’s sculpture class, who said the standing figure represented social pressures looming over students’ heads. Library officials loved them and during exam week placed the sculpture prominently on the 2nd floor, inviting a lively, scrawled and cathartically vulgar debate over the divination of meaning from art and prompting one afternoon the playful placement of a ball cap on the oppressor’s noggin.