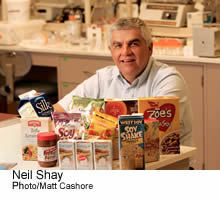 Neil Shay is a Notre Dame associate professor of biological sciences who studies the biochemical mechanisms involved in nutrition and metabolism. Currently he is researching the effect of soy foods and isoflavones on cholesterol levels. Recently we asked him if it is true that you are what you eat.

Notre Dame Magazine: A European we know arrived in the United States not long ago and said he was stunned by the large number of fat people he saw.

Shay: It’s just so easy in our society to eat high-calorie foods. You drive up, push a button in your car, the window goes down, you speak into the microphone and out comes the 12-piece deep-fried chicken dinner with mashed potatoes, gravy, cole slaw, mayonnaise, and you go home and eat all that. Here’s what people don’t understand: One 12-ounce Coke is about 150 calories. If you are over your caloric balance each day by just 150 calories, you will be roughly 50,000 calories in excess for the year. Since it takes 3,500 calories to equal one pound of body fat, that means one extra Coke per day can add about 15 pounds of fat to your body each year.

NDM: Is the obesity problem in the United States really as bad as some people say?

Shay: Adult-onset diabetes, what my mother used to call “sugar diabetes” and doctors refer to as Type 2, is directly related to obesity. Clinicians say we are in an epidemic of diabetes, and the facts back them up. In 1994 there were just two states, Louisiana and Mississippi, in which 6 percent or more of the population were suffering from Type-2 diabetes. By 2002 that had spread to 33 states. It’s how we’re managing our lifestyles. This is a disease of sitting on your rear, eating Twinkies and washing them down with a 44-ounce Super Big Gulp of cola. Some nutrition researchers believe the epidemic correlates with the increased use of high-fructose corn syrup as a lower-cost alternative to sugar. It’s used everywhere now.

NDM: Knowing what you know, how do you manage your own diet?

Shay: I try, as much as possible, to avoid fast-food places, beverages sweetened with high fructose corn syrup and food products containing transfatty acids, which are not metabolized well by the liver and may be related to higher blood cholesterol levels. Also, tilting toward a vegetarian diet is a good idea. There’s a lot of evidence that if you replace animal protein with vegetable protein you will improve your blood lipids. Doctors only rarely see vegetarians with high blood cholesterol levels.

Shay: We have a number of projects that are examining whether compounds known as isoflavones, which are found in soy at high concentrations, have an effect similar to Lipitor and other so-called “statin” drugs in reducing cholesterol levels in the bloodstream.

Shay: We think soy isoflavones block the cholesterol-sensing system in cells. So liver cells act as if they don’t have enough cholesterol in them, and they try to take up cholesterol from their surroundings, out of the blood stream. Your body needs cholesterol. It’s a natural component of cell membranes; your body uses it to form steroid hormones like estrogen and testosterone and vitamin D. You just don’t want excessive amounts in your bloodstream because there it adheres to the lining of your blood vessels. That’s a problem.

NDM: Can isoflavones and statin drugs work together?

Shay: We have some promising preliminary data which suggests that certain combinations of isoflavones and statin drugs, in fact, may be synergistic. They may enhance each other’s ability to remove cholesterol from the blood. We’d like to see if we can design an optimal combination. Among other things, we’re also trying to confirm or deny whether isoflavones affect the rate that Lipitor and other statin drugs are degraded by the liver. The faster the liver breaks down the drug, the less effective it is.

NDM: Is it possible to have too much soy?

Shay: One of our cell studies suggests that at least one of the soy isoflavones can possibly accelerate the degradation of a statin. However, I don’t think a person has to worry if they are just eating soy foods. It’s more likely that the level would be a problem only if someone ingested excessive amounts of concentrated isoflavone supplement tablets. That’s a lot different than eating a soy burger. Sometimes, too much can be as bad as too little. When something is concentrated in pill form, you have to wonder if you are approaching the definition of a drug.