Last March, 2008 Holy Cross grad and former Notre Dame trombone player Kyle Kincaid found himself once again immersed in the world of marching band. But instead of the grass field of Notre Dame Stadium, this time he was to march among the coconut groves of a far more tropical locale: Samoa. 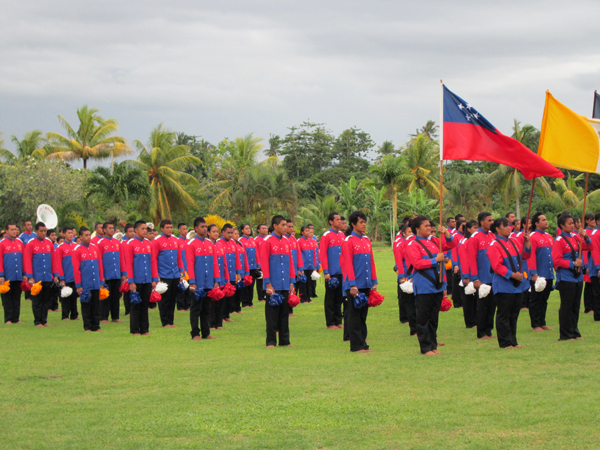 Kincaid had taught English at a remote Samoan village for two years as a Peace Corps volunteer and had returned to the U.S. just a few months earlier. He was a natural choice for band director Kenneth Dye, who had received a call from the Archbishop of Samoa-Apia, Alapati Lui Mataeliga, looking for someone to help direct a band of high schoolers and young adults for the island’s 50th jubilee celebration.

The timing of the phone call was more than a little serendipitous for Kincaid, as it came just one day after he made the decision to commit his life to God and begin the process to apply to Moreau Seminary.

“It was really surreal because it was the day after I felt this calling to move forward with the seminary,” he said. “It was also just a few weeks after I had tried to find a job in Samoa and get back there…it was a very emotional time.” 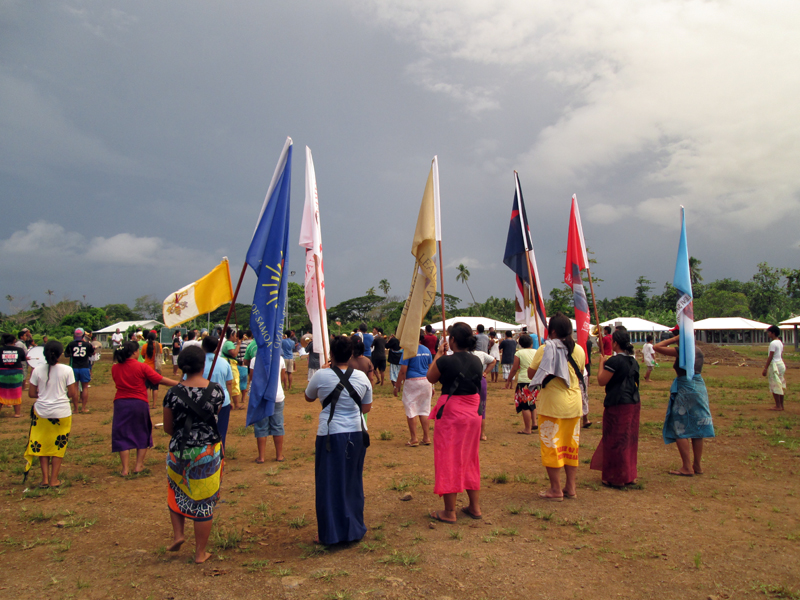 Returning to Samoa, a tiny island nation whose people have strong ties to Catholicism, would help Kincaid prepare for his entrance into the seminary this August.

“I would be able to attend daily Mass and have several other opportunities for prayer, and that reassured me that it would be…a year of growth,” he said.

Samoan Catholics, many of whom Kincaid says are so deeply religious that they would give their last dime to the church, are also known for their musical talents.

“Dance and music and singing are all a big part of the culture,” he said. “They don’t use song books in church. It’s all memorizing.”

As he had learned much about the Samoan language and culture during his time as a Peace Corps member, it was not the foreign customs Kincaid worried about adjusting to, but the musical instruments he had not interacted with since graduating in 2008.

“They read music differently over there. Here, the trombone is written in bass clef, but there it’s written in treble clef,” he said. “I had to learn how to read music all over again.”

Archbishop Mataeliga was at all of the band’s rehearsals and served as a source of neighborly support for Kincaid during much of his time in Samoa, often giving him a ride home from practice and helping him with any issues that arose.

“He was very accessible,” Kincaid said. “That would never happen in the U.S.” 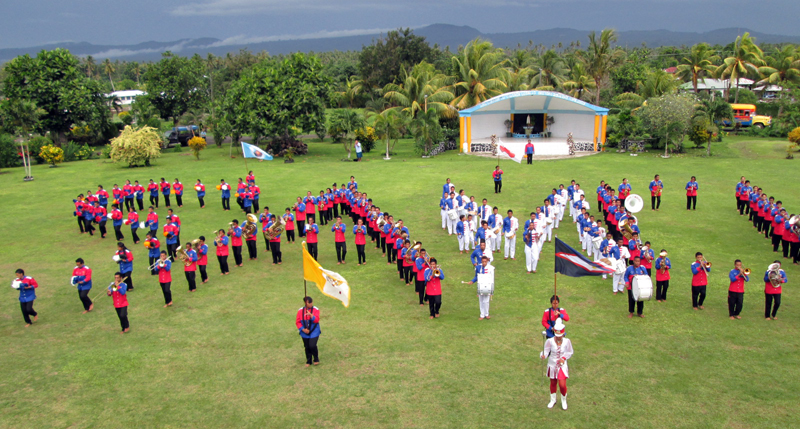 Kincaid brought a little piece of Notre Dame game day with him as well, showing his 150-member band videos of performances that they immediately wanted to emulate. One of their first requests was to create a formation that spelled out “Samoa,” a task that seemed nearly impossible without the yard markers that American marching bands are used to following when performing at halftime of football games.

“Our first rehearsal I was out there with the megaphone like I remembered at the Notre Dame band, assigning section leaders and doing drills in a big block,” Kincaid said. “The archbishop commented and it seemed like it was something they hadn’t done before.”

After weeks of rehearsals and preparations, they were finally ready to perform. On July 1, Kincaid’s Catholic youth band, along with other bands like them from all across the country, marched past foreign dignitaries and fellow Samoans sporting commemorative T-shirts and waving flags of red, white and blue to celebrate the 50th anniversary of their island nation’s independence, the first in the South Pacific to do so.

“Samoans do big celebrations well,” Kincaid said. “With it being such a small country they really have a close network.”

Throughout the two-week celebration the band participated in several performances, including a ticketed concert fundraiser and a televised marching band competition. Their performance brought them such great exposure that they were invited back to play at the opening of parliament in September. 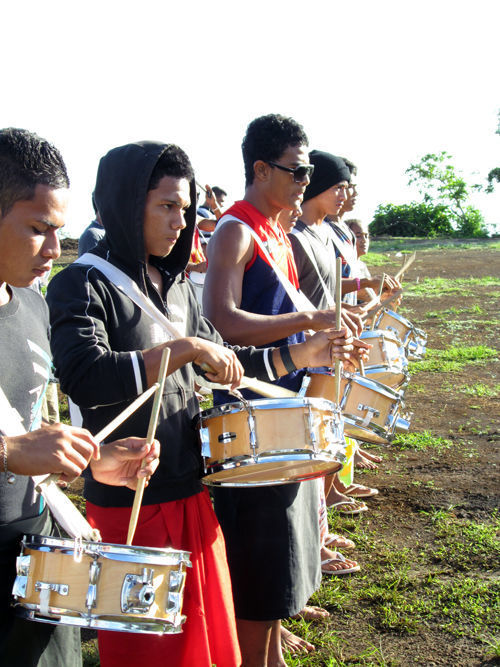 But Kincaid’s service for Samoa didn’t end when he flew back to his native Michigan in December. As part of a new program he created himself named the Youth Empowerment Initiative, Kincaid brought three of his former Samoan students home with him. During their time in Michigan, Kincaid took them on educational cross-cultural experiences, touring a hospital and a courthouse, as well as some more fun ones, attending a Notre Dame basketball game and going bowling, all while helping them to adjust to temperatures far below what they were accustomed to in the tropics of the South Pacific.

For Kincaid, the timing of everything was just right.

“A lot came together at the same time,” he said. “I really believe God had a part in it.”

Madeline Stone is the spring 2013 intern of this magazine.