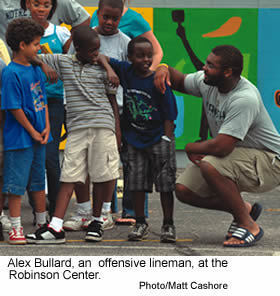 “I could not recite Shakespeare the way some of these fifth graders are reciting. They’re great kids,” fifth-year senior Chris Stewart says.

Through a new one-credit class at the Center for Social Concerns called Community Leadership for Tomorrow, 67 students volunteered at local service organizations and reflected on their experiences. Many were football players.

“I’ve always felt that one of the main components of developing the student-athlete is through presenting and giving them the opportunity to be others-centered,” says head football coach Brian Kelly, who encouraged his players to take the course.

Some football players had already done individual service projects, but Kelly says he wants more players to participate in community service in order to break down the distance between the team and the community.

“If anything it will bond the football program a lot better with the community, which I think is something that’s been lacking,” says Stewart, who plays offensive guard. “We are representatives of this community, and a lot of the tensions that are evident between Notre Dame kids and Notre Dame athletes and the community could stem from people just not knowing each other.”

Bill Purcell ’86, ’92M.Div. and Mike Hebbeler of the Center for Social Concerns designed a course that included social analysis of urban poverty, service projects and reflection. The students volunteered at the Robinson Center, the Center for the Homeless, local Boys & Girls Clubs of America, and South Bend’s Logan Center, which serves people with disabilities.

“We want students to look internally at themselves, their own skills, their own character development, but at the same time learn the stories of South Bend, learn about poverty and learn about social analysis,” says Purcell, the course instructor and an associate director at the social concerns center.

During the course, local leaders spoke about topics such as leadership and empathy. One speaker, Adam Sargent ’99, was paralyzed from the chest down after a car accident near campus. The former Notre Dame lacrosse player returned to campus to finish his degree and now works as a student-athlete academic adviser.

Junior Kyle Rudolph, who plays tight end, says Sargent’s speech helped him better understand his service project at Logan Center. “He gave a great speech not only about his story . . . but about treating people with disabilities the same way, having empathy for people who might not be as fortunate as you are.”

At the Robinson Center, some children recognized a few volunteers right away, but others did not realize some were football players until the end of the two-week program. Velshonna Luckey, Robinson’s associate director of children’s programs, says her staff referred to any participating student-athletes as the “volunteer group” or “student leaders” rather than “athletes.”

“We tried to use that language because I thought it was important to really give [the students] an opportunity to have a true experience that wasn’t built around football but built around community engagement and volunteerism,” Luckey says.

The new coach says he will encourage his players to build community relationships and weave service into their academic-year schedules of classes, games and practices.

“When you do that as a coach, you foster an environment where it’s okay to do service — it’s cool — and that’s really what I’m trying to do,” Kelly says.

Claire Reising is a senior majoring in English and French and was Notre Dame Magazine’s summer 2010 intern.