At Katherine Corcoran’s graduation from Notre Dame in 1981, Ronald Reagan, the newly elected president and survivor of John Hinckley Jr.’s attempt on his life, was the commencement speaker. As with other presidents taking on that job, there were protests on campus, largely due to Reagan’s support of anti-communist military forces in Central America.

“It was big news because it was his first public appearance since he had been almost killed, and so my reaction was ‘I’m going to cover this. This is news,’” says Corcoran. So instead of walking in her graduation, she covered the event, sitting with the rest of the press during the ceremony. 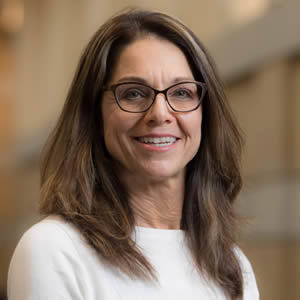 Corcoran credits that decision to what she learned as a journalism student under Robert Schmuhl ’70, who later founded Notre Dame’s Gallivan Program in Journalism, Ethics and Democracy. Schmuhl was a Notre Dame undergrad in the late 1960s, a period of much campus turmoil, and Corcoran remembers that students in one class asked if he had participated in any protests. He told them, ‘“Of course I didn’t march, I was a reporter, I covered it,’” she says.

She took his teaching lesson to heart. “[I]f you want to be a journalist, that’s your role. You don’t drop the pen and get involved. Your way of being involved and your service to the society is with the pen and the notebook.”

Corcoran, who recently returned to Notre Dame as a visiting fellow at the Kellogg Institute for International Studies, continued that role as an independent observer for many years after graduation. She spent more than a decade with The Mercury News in San Jose, California, and later nine years in Mexico for the Associated Press, where she went from being an editor for the Latin America region to being AP Bureau Chief for Mexico and Central America.

That job involved serious breaking news and tough decisions, including when AP broke the story in 2014 of the Mexican military executing its countrymen. Corcoran and her staff suspected something was amiss after receiving a short government press release stating that the military had been in a shootout, resulting in 22 civilians killed and one soldier injured.

“We had heard of cases like this before where they just make no sense, because if you’re in a shootout you don’t have that lopsided of a result,” she says. “But they were always in places far from Mexico City, near the border, extremely dangerous to go to. But it just sounded like another one of these cases where we suspected the army was committing extrajudicial killings.”

As bureau chief, Corcoran had to ensure the safety of her staff. “And so it took us about a day to decide that it was okay to try to go there, because we were always assessing the situation on the ground, and we would call people we knew there or contacts we had to find out,” she says. “It was indeed a very intense situation, and [there were] people that weren’t officials, they were young men without uniforms and big SUVs, and so we assumed they were the cartels, and it was a very dangerous situation.”

What the reporter and photographer in the field discovered confirmed the hunch that something was amiss. The accounts of locals told the same story as the photos, which “looked as if the people had been lined up against the wall and just shot at chest level. You could see a line of bullets at chest level. And so we had not only the reporting, but we had photographs of that.”

AP’s reporting didn’t change the Mexican government’s denial of out-of-court death sentences. When it turned out that there were three survivors from the massacre “we tracked down one of them with the help of a freelancer who was working in the area. So we interviewed her and she told the story, which basically matched what we had seen from the evidence at the scene,” Corcoran says. “And then she had to be protected. She had human rights lawyers at her home, making sure that nothing happened to her.”

The witness said she had been tortured into agreeing with the government’s story that the event was a shootout. The other survivors has been jailed, in order to silence them.

AP’s story was confirmed by the National Human Rights Commission in Mexico, and the pressure lead to the release of the two prisoners.

“There were also arrests of soldiers based on our stories,” says Corcoran. “The problem is, which often happens not only in Mexico but everywhere, the lowest-level people pay the price. So they took some ground-level soldiers and arrested them, and there were no upper-level people who were ever implicated or held responsible. And in fact the secretary of the army came out and said that his army didn’t do those kinds of things. . . . So the people who ultimately were prosecuted were very low-level people, and eventually they were released for lack of evidence.”

Evidence and facts are essential to Corcoran, even if hard news may only result in window dressing, as was the case here. But, paradoxically, it has become more difficult and dangerous to be a journalist in Mexico in these days, even as the country has become more democratic.

“The political power dispersed to lower levels, to governors, to local heads of municipalities, and in basically a sort of an ironic way made the system much more vulnerable to corruption and malfeasance,” she says. “With that lack of control, that weakening of the head, the governors have their own little fiefdoms, and started making their own deals with various illicit interests. And so it actually became, even though in one sense more democratic, it became more dangerous for journalists to report what they were actually seeing or investigating.”

A poor justice system where violence against journalists doesn’t always have consequences makes it worth the risk for some to “silence” reporters, who aren’t usually as well trained as in the United States.

“Many of them have three or four jobs to make ends meet, and one of those jobs might be working for the government, which would be a clear conflict of interest in most countries but not there, and so there is a problem with the professionalism of the press also, and in order to fix it you would have to attack the problem on many levels.”

Corcoran aims to write a book about the paradox of Mexican democracy vs. freedom of the press. Having dedicated so much of her career to the country and its issues, she has a clear opinion on why a U.S. audience should care.

The new developments in the relationship between the U.S. government and the press is another reason to pay attention.

“Now that we’re in a new era of the press coming under direct attack, and open attack, I think it’s important for people in the United States and even reporters who up till now may have taken freedom of expression and doing their jobs for granted, to see what happens when you allow that to break down,” says the veteran journalist. “I think in addition to being important for the stability of the United States, it’s an important view of what can happen if we become casual about our right to free speech and our freedom of the press and discrediting the press and calling all the press liars.”