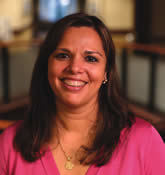 The immigration issue at Notre Dame goes deeper than the policy debate that crystallized on campus in October’s academic forum. For hundreds of foreign-born faculty, staff and students, the stakes and stories are personal. Just ask Adela Penagos.

It took Penagos, a First Year of Studies adviser who holds a faculty appointment in romance languages, 10 years to earn her doctorate and half that many to obtain permanent residency status in the United States. Her diploma and identification card arrived within a month of each other last summer, and while she’d always known discipline would get her through the dissertation, the residency process was far more stressful.

“Getting my green card was a very different story,” she says. “It took a lot of time and money in addition to many intangibles that I was unable to control. As a result, I was never certain of what the final outcome would be.”

A native of Córdoba, Mexico, Penagos attended an American college and came to Notre Dame in 1989 to study Spanish literature. She was active in international student groups. She earned a mater’s degree from Notre Dame in 1992, and her path took her to Boston for doctoral study, but after completing her courses in 1998 she wanted to explore work in university administration. A call came from Notre Dame contacts, who wanted her to consider a position in the old Office of Multicultural Student Affairs.

Already familiar with student visas and the complications caused by events as simple as visiting her family, Penagos told ND that visa issues might arise. Indeed, on that early May day she was hired, she says, the State Department reached its quota cap for H-1B visas, a non-immigrant category that lets employers hire skilled foreigners who have at least a college education.

“There was nothing we could do about it other than say goodbye or wait until October,” the start of the federal government’s fiscal year, she remembers.

Notre Dame waited, but the headaches were just beginning. State laws protecting foreign workers from salary discrimination added a layer of bureaucracy. Leaving and re-entering the country always initiated more paperwork and fees. September 11 prompted extra scrutiny of all visas and, she later learned, lengthened the process of applying for permanent residency.

“A lot of it had to do with faith,” Penagos says. “I knew that if it was God’s will, it would work out. I was just happy Notre Dame was willing to work with me.” She’s especially grateful to her then-supervisors in Student Affairs as well as the Office of General Counsel. But when she finally decided as a non-faculty member to apply for permanent residency, she had to hire an attorney.

“I look at it as an investment,” Penagos says of the money and time spent during the nearly five-year endurance test.

She turned to Thomas Arkell ’94, ’97J.D. In addition to expertise in immigration law, Arkell had personal experience with the system. He grew up the son of a provincial Supreme Court justice in British Columbia and accepted a scholarship to play hockey for the Irish. As a student he had faced the same hassles traveling to and from Canada that Penagos encountered with Mexico. While he was in law school, his parents became eligible for U.S. citizenship, opening the door for him to apply for permanent residency. Arkell says he knew he “wanted to make a life-long commitment to this country,” and a professor advised him to hire counsel.

“At that point I decided to become an immigration lawyer so I could help myself and other people avoid the problems I had encountered with the immigration system,” he says. Making good on his promise, Arkell represents pediatric cardiologists, cancer researchers and other scholars and professionals who perform especially valuable services while they’re here and, often, back in their native country. He returns to campus each year to talk to international students about their needs and how to go about looking for work in the United States after graduation. While many never seek permanent residency and are therefore technically not immigrants, even a year of work experience in the United States can give them a professional boost back home.

“Notre Dame continues to be very supportive and proactive for [its] international student population,” Arkell says.

For Penagos, the lessons are an integral part of her formation. She plans to pursue interests in American higher education, which include supporting students—American and international—who want to learn and live abroad. She’s sympathetic to foreigners who cannot afford the fees she paid over the years and has no problem with making the system faster and cheaper for those with few resources. But she insists that accountability is important for both the government and the individual. “You learn to be very patient; you learn how difficult the process is. Now I can be a witness to that,” she says.

If she chooses, Penagos can seek citizenship in five years. Meanwhile, being a permanent resident means she can apply for jobs and fellowships that were not open to her before.

Recently, Arkell informed a world-class researcher from Europe that his application to continue his work in the United States had been approved. “His voice was cracking, and he probably thanked me 10 times during the conversation for helping him—that is the most rewarding part of what I do.”