Editor's note: Two astrophysics grad students were present for a "literal bump in the night," witnessing the first-ever detected neutron star collision, one of the most significant discoveries in their field and a major step forward for the research described in this story.

Although the name sounds fantastical enough to be taken from the pages of a science-fiction novel, Galactic Archaeology at Notre Dame is a real group doing cutting-edge research on the origins of the elements in our universe.

Among the team’s pursuits is mapping the origins of the Milky Way and examining certain second-generation stars to learn more about the first stars in the universe.

All of this started with Timothy C. Beers, chair of astrophysics in the College of Science. Notre Dame doesn’t have an astrophysics department, but when Beers arrived at the University in 2014, it established his position and helped him found his team.

“Galactic Archaeology” is a made-up term, concocted by Beers and his nine researchers. “It captures the essence of how we figure this stuff out,” he says. “We’ve got to find ancient relics that are still alive and infer, having found those, what the composition of the gas from which they formed was. Over time, you fill out the picture.”

Beers compares it to writing a novel.

“For years, you spend time coming up with the concept, and then you sit down to write it and you realize you don’t know any of the details,” he says. “At this point, we’ve identified the chapters. We’re starting to write some of the paragraphs. Slowly but surely, we are starting to find a plausible story — perhaps not unique, but plausible — of how the universe built the elements of our world.”

The Indiana native, who holds undergraduate degrees in metallurgical engineering and physics, and a doctorate in astronomy, was engaged in a postdoctoral fellowship at the California Institute of Technology when he started hanging out down the road at the Carnegie Observatories. He asked for big data sets from past observations on a particular telescope so he could practice working with the data in advance of the time he would be doing his own research on the instrument. That practice dataset was from a survey searching for metal-poor stars, which was not at all what Beers was looking to study. 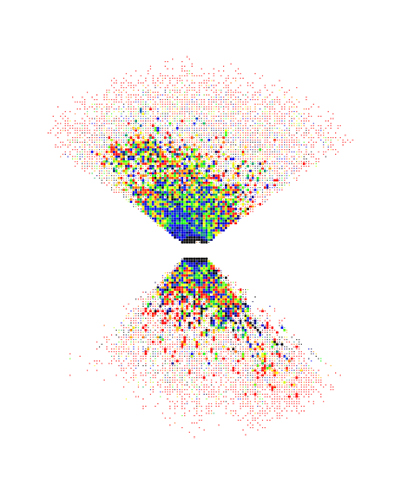 A chronographic map of the Milky Way. Courtesy Galactic Archaeology at Notre Dame.

“It’s what I ended up doing for the rest of my life,” he says.

As he practiced with the data, he found stars that theoreticians said didn’t exist. But he had the proof on the page in front of him. Beers was the first to identify “carbon-enhanced metal-poor stars,” known as CEMP stars. These stars are the fossils of the galaxy, part of the second generation of stars formed when the first stars died out millions of years after the creation of the universe, a brief time on the galactic scale. The second generation of stars has been around for billions of years and gives astrophysicists like Beers a window into the past.

CEMP stars hold the “elements of life” — carbon, nitrogen, oxygen — and are a record of the elements created by those first stars. Since Beers’ discovery 25 years ago, spectroscopy has revealed sub-classes within the CEMP class of stars, giving purer examples of what those first stars created.

There was a time, Beers says, when the universe was made of just hydrogen and helium. “How did we go from hydrogen and helium to the rest of the periodic table?” he asks. “I’m working, literally, on a lab that blew up 12.5 billion years ago. We’re picking up the pieces.”

One result of the GA@ND team’s research is its creation of the “clearest picture yet of how the Milky Way formed more than 13.5 billion years ago,” Beers says. With its beautiful array of colors, the chronographic map could be mistaken for a piece of modern art. The map traces stars that burn helium in their cores. Using the ages of these stars, the team mapped the sky and found a clear correlation of age to location, with the oldest stars at the center of the galaxy and younger stars farther out.

By looking at stars in the halo of the Milky Way, the group also is closing in on a scientific mystery of element creation: the rapid neutron-capture process, or r-process.

A seed nucleus, frequently an atom of iron, is rapidly bombarded by a large number of free neutrons, which latch on and result in about half of the elements larger than iron on the periodic table. While the process itself is understood, the question pondered by scientists for the last 60 years has been: where?

Beers wants to see the solution to the location of the r-process before he retires. He’s nearly 60, so he hopes it’s within the next few years.

The excitement of that search keeps Beers attuned to the stars. “You’re made of carbon, nitrogen, oxygen, plus a little bit of other stuff,” he says. “I’d just like to know the story, and I think human beings want to know the story. There’s an origin tale that we need to understand before we can declare victory, that we actually understand the world around us.”

Amanda Gray is the web content editor at Notre Dame Law School. Find her on Twitter at TheAmandaGray or email her at agray3@nd.edu.