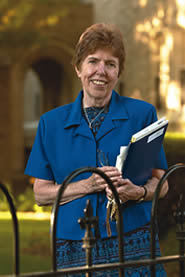 My first meeting with Sister Jean: January 1975, O’Shaughnessy Hall, freshman year, sitting spellbound in her class, The Gospels of Christ.

My last meeting with her: October 8, 2011, Dujarie House nursing center, before the ND-Air Force game, catching up, laughing, going to Mass in the chapel, eating lunch together, all the time Sister Jean seated in a wheelchair, fighting pain from the cancer that eventually took her.

The years in between: becoming friends, with Sister Jean always ready to listen and ride the roller-coaster events of life with me — the miracle of falling in love, marriage (she gave the homily at our Sacred Heart wedding, and I can still hear her words about love’s mystery), births, deaths, miscarriages, counseling sessions, pink slips, cross-country moves, new jobs and promotions. When I won a trip for two to Hawaii at my 25th ND class reunion, Sister Jean was thrilled that it coincided with my 20th wedding anniversary. But you didn’t need to be a winner to catch her ear. She knew in her bones that loss is one way God gets our attention, breaks our hearts open to something more, and that God’s love does the shattering.

“I had this crazy dream the other night. I was teaching class in the Notre Dame Stadium.” — Sister Jean Lenz, OSF

Over 80,000 strong, decked out in blue and gold, we stream into the stadium, grads telling Sister Jean stories as we settle into bleachers, eyes straining to see the welcoming, daring woman standing at the coin-toss spot on the 50, then the crackle of the mic, a hush falling over the crowd, waiting to hear her voice, her laugh, one last time to be held by her wide-open heart.

Lesson One: Be prepared to believe anything . . . as long as it’s incredible

She starts with our favorite, the Parable of Spring Streakers. Early in her career as rector of Farley, a pioneer of ND’s venture into co-education after 130 years as an all-male bastion, near midnight, deep into grading theology papers, suddenly the husky-throated chant, “Farley! Farley! Farley!” Swinging the door open toward a crowd of some hundred young men wearing only their masculinity, ready to charge the hall but stopped cold by Jean’s shout: “You’re not coming in here dressed like that!” “Oh, no, it’s Sister Jean!”

Scrambling behind bushes, frozen in shock, stooped backs facing a nun standing tall, then a cry of brotherhood: “Let’s get Lyons!” Jean dashing to the phone, warning the Lyons rector to bolt her doors against the marauders of springtime. Catching her breath, Jean asks Farley’s security guard, Hazel, “Am I dreaming or did this really just happen?” Behind her, the clapping of Farley women.

“Looking back on my life, there’s been more peace and chaos, laughter and tears, more life and death and grace than I ever dared to imagine,” she says. “So much gift!” The lion’s share of rectoring — refereeing shouting matches between roommates, listening to parental problems, romance woes, counseling that “some people get you ready for other people,” all those evening talks and walks around the lake, her life a front-row seat at a long-running Broadway drama.

Her darkest days, facing the passing of Farley women — Cindy, Terry, Kathy, Mary, Michelle and Rita — so much grief giving way to wisdom, resurrection, in the re-telling of their stories, keeping them alive.

Always the torrent of students’ questions about the life of the Spirit, yet in the silence of watching others kneel down and pray, in chapels, at the Grotto, on retreat, words fell away, and as Eliot wrote, “At the still point of the turning world . . . there the dance is.”

Lesson Three: When you’re asked to run through sprinklers at midnight, say yes

Sometimes when there’s a knock on your door, Jean said, it’s a request, a summons to take you beyond your comfort zone, to grace, to joy. “Will you run through the sprinklers with me?” asked the Farley resident. “I heard them swish on outside but don’t want to go alone.”

“For a moment I stood still with a stare, my mouth open, then I closed the door behind me, and we left Farley laughing,” she said.

“In all, we ran the whole north quad, finally arriving back at Farley’s south entrance — drenched, laughing, out of breath, a bit exhausted, and so refreshed.” That midnight moment, an apt image for her 38 years at Notre Dame — drenched in laughter or sorrow, breathless or exhausted or so refreshed.

Now names, faces come out of nowhere — students she taught or knew, all the Farley women, her 10 Franciscan sisters with her in rector ranks, Holy Cross colleagues, ND staff, workers at the Pay Caf, friends, family. “In the midst of late-night musings, especially when the heat hangs heavy, I think I hear a knock at the door, and I’m so ready for another sprinkler run in midnight moonlight, but deep down I know that only happens once in a lifetime.”

In the packed ND Stadium, silence. Then Jean’s classic farewell, “Bye-bye for now.”

Marianne Murphy Zarzana writes and teaches in the English Department at Southwest Minnesota State University, Marshall. She and her husband, Jim Zarzana ’85Ph.D., are the parents of Elaine Zarzana ’08. Her blog about writing, Fly-over Country, is at mariannezarzana.com.