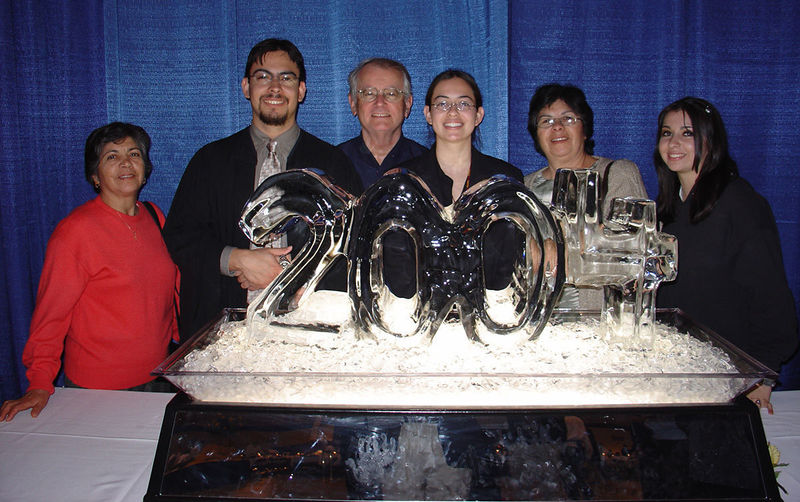 Brian Mahon, second from left, and his family, including his father, Timothy Mahon ’72, after graduation in 2004.

More than I can recall from the recent past, this year has been rife with calls for increased diversity and inclusion. I write this on the heels of a nearly two-hour work presentation on the subject. I came away with the same fundamental questions and irritations I’ve always had — and the only ones on which I have any perspective to offer. I have difficulty consolidating the ideas of race and diversity with my personal background.

My father was Irish-Catholic, and the generations of Mahons, Kanes, Casserlys and Doolans before him could be traced to late 19th century Ireland. My mother, more succinctly, immigrated from Chile in 1972. Because of this, I’ve always had a simple this-or-that sort of mentality when it comes to race. Following this meeting on the need for more diversity and more inclusion, I had to ask myself: “What meaning do these statistics have describing the composition of a workforce? What does it mean to say that there are 84 percent Caucasians in an organization? What does the organization mean when it refers to ‘diversity,’ and what does that word mean to me?”

When I first arrived at Notre Dame in 2000, I think the racial demographics were something like 80 percent Caucasian, 10 percent African American, 10 percent everyone else. Don’t quote me on that. It’s been 20 years, and it is an approximation. Either way, I had a laugh at the thought — and being from South Florida, wondered what I got myself into. But the experience wound up being no different for me than back home. It was like high school with more khaki cargo shorts.

During my freshman year, I was asked if I was Filipino, Palestinian, Indian or just “what” in general. I never took it as hostility, as such questions are now thought of as “microaggressions.” I always assumed people asked out of genuine curiosity or a desire to find someone like them. What could I say? To give a simple one word answer such as “Hispanic” or “Caucasian” would naturally be denying one or the other half of my being. In elementary, middle school and high school, I would politely answer with, “No, I’m [insert clauses].” However, at Notre Dame and for years thereafter, I began making people guess for a prize or made something up to see how many different perceptions I could juggle among friends and acquaintances.

Why not? I was over it and did not care to serve someone else a piece of my personal background. That attitude seems now both childish and exasperated. I could evade the interpersonal inquisition, but how was I to respond to those questionnaires I should later encounter asking for my racial background? What should I do with those job applications, graduate schools, government identification cards and fishing licenses? Do I go for looks? That would be cheap. Do I go with what my upbringing has me gravitate toward? That might appear deceitful. Do I mark N/A? Often I took the last option because someone else’s demographic chart is not my prerogative.

With that said, when universities and companies and government agencies dissect their racial composition to determine if they are sufficiently diversified, how do they know they are getting the right data? Is race as simple as this, that or the other? Should I and my siblings align on a single response, despite our different appearances? What is it that these organizations want when they say “diversity”?

For example, my son could pass for Hispanic or non-white Hispanic, whatever they populate those forms with now. However, by genealogical descent, he is majority Caucasian due to my wife’s background. Would he help a business with its diversification objective by appearing in a brochure but damage the cause in their analytics? How do differences between appearances and backgrounds fit into the meaning of diversity as organizations define it? What, exactly, are those calling for more diversity really looking for?

I am not throwing these questions to set up any uplifting or insightful truth. I write only from my experience and don’t pretend to have a meaningful understanding of anyone else’s story. I doubt I’m alone in feeling frustrated from distilling my personal composition to meet someone else’s framework. And when I hear statements that we need to embrace and seek diversity, I feel a need to implore all to understand that diversity runs more than skin deep. To me, we cheapen the human experience by compartmentalizing humanity’s myriad compositions of color and background into clumsy, inarticulate categories when the truth is nuanced and often difficult to extrapolate.

There is no easy answer to those questions. I believe that diversity is best expressed as an acknowledgement of the spectrum of humanity, all of us descendants of the explorers and homesteaders, invaders and invaded, those who chose to stay with alike and those who chose otherwise. It is a noble and often necessary thing to welcome those with different backgrounds to inject new ideas, new talent and new perspectives. But to do so requires more than general mission statements with unspecified goals and a selection of seven different options to meet those goals. For those organizations attempting to understand their demographics, it would be more honest to allow write-in responses than provide a selection of answers. This could reduce the likelihood of unintentionally inaccurate information that would otherwise defeat the purpose of the exercise and force half-truths from respondents. Alternately, if an organization is truly invested in diversity, maybe it would be better to ask that question in a face-to-face discussion about who people really are rather than relegating it to a fill-in-the-blank data dump.

Twenty-one years ago, I think I selected “Caucasian” on my application to the University of Notre Dame. It was with a shrug and a general sense of complacency. They had my SAT and ACT scores and my high school transcript. That is all anyone needed to know, and if that was not good enough, well, I had four alternative schools with applications in the mail. To be honest, I regretted subjecting myself to those Indiana winters, but I never regretted the people and the atmosphere of Notre Dame.

If I ever felt out of place, it was because I was often the only South Floridian in a given class. I do not recall a general sense of unease or being singled out. Blue and gold and Kelly green were the colors that mattered, and the only people we took issue with were the Trojans, Spartans, Boilermakers, Wolverines and Trojans again. The sense of family and inclusion at Notre Dame was always present, and it seemed we were always united by the spirit of community fostered there.

As society progresses, may that sense of union never change.

Brian Mahon is a former Keenanite now living in Virginia with his wife and two sons. He received his B.S. in biological sciences, has a background in nuclear power, and is a writer in his free time.