At one time, walking into the reliquary chapel of the Basilica of the Sacred Heart at Notre Dame was a mystifying encounter with bewildering, foreign objects. If, that is, visitors could even find it.

The small chapel was easy to miss: to the right of the large Lady Chapel in the back of the Basilica behind the main altar, the alcove could seem tucked behind the more lavish adornments that surrounded it. And its unlit cases housing small medallions often labeled with handwritten Latin abbreviations were unlikely to hold anyone’s attention for long. 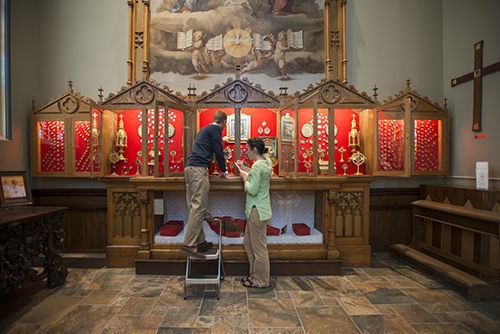 But that small alcove is actually a treasure trove, housing 1,618 relics of up to 784 saints and blesseds. Included in the collection are most of the hard-hitters: relics of the crucifixion, Mary, Joseph, the apostles, Augustine, Thomas Aquinas, Francis of Assisi, Catherine of Siena, Thomas More, Teresa of Ávila, and the Congregation of Holy Cross’s own Blessed Basil Moreau and Saint André Bessette.

According to the relic certificates (authentica) housed in the sacristy office — the documentation that must accompany any relic intended for public veneration — almost half of these precious remains are fragments of the saints’ bodies. Others are objects that the saint used during life or objects that touched the saint after death, as well as some that are undesignated.

The earliest grant of a relic dates to 1832. However he acquired it, the university’s founder, Rev. Edward Sorin, CSC, himself signed the back of the certificate in 1847. A major wave of relic acquisitions followed during the years 1850 to 1879 and, as the university itself was expanding, from 1950 to 1979. These relics were gifts from more than 80 different cardinals, postulators, bishops and abbots, and the basilica continues to receive relics to the present day.

Dating from its founding then, the Notre Dame community cultivated this concrete devotion to the saints that speaks so tangibly to the unity of the human person, body and soul. Throughout the history of the Church the remains of the saints have provided the faithful on earth a material connection to the saints in heaven, anticipating the future resurrection of our bodies. 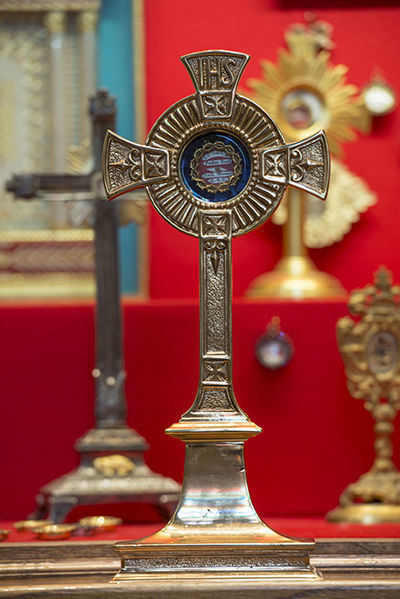 The seeds of this hope are visible in Scripture: the Israelites’ “translation” of the bones of Joseph out of Egypt (Exodus 13:19, Joshua 24:32), Elisha’s parting of the Jordan with the cloak of the recently assumed Elijah (2 Kings 2:13–14), the dead man who was raised to life upon contact with Elisha’s bones (2 Kings 13:20–21), and healings that resulted from a touch of Christ’s garment (Mark 5:25–34), Peter’s shadow (Acts 5:15), and Paul’s handkerchiefs and aprons (Acts 19:11–12). By the second century, the Church had begun fostering a profound communion that would enliven its members for centuries.

Nevertheless, for most modern Americans the veneration of saints has become a baffling devotion, even among Catholics. Many could not explain why the Church would honor the material fragments of ancient and modern bodies. Whether it looks superstitious, ignorant or idolatrous, the entire devotion often disturbs our cultural tendency to distinguish between concrete objects and the spiritual realm.

Perhaps due to this tendency, even the Basilica’s reliquary chapel became inaccessible within the Notre Dame community. At least by the 21st century, no one had any idea how many or whose relics the chapel contained. Through the years, inventories had been attempted, yet the collection of relics remained a mysterious tribute to a mystifying devotion for contemporary visitors. 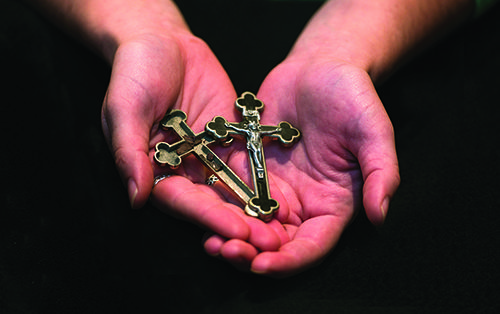 But not anymore. In the fall of 2012, after a three-year labor of love, we completed an inventory of the chapel’s relics. In the end, after some forays into the daunting Bibliotheca Sanctorum and other encyclopedic resources, only a handful of uncertain designations remained among the 1,618 relics. All were mapped, catalogued and indexed, and a permanent spiral-bound copy of the reliquary chapel guidebook is now mounted in front of the cases. A short catechetical pamphlet on the veneration of relics is also available in the chapel.

While this work in the reliquary chapel most directly serves those who visit the Basilica, it is part of a greater aim to serve all the saints, living and dead. “The relics of the saints are more precious than silver and gold,” Father Sorin once reminded us. And the reliquary chapel housed on Notre Dame’s campus serves as a concrete witness of this inestimable worth.