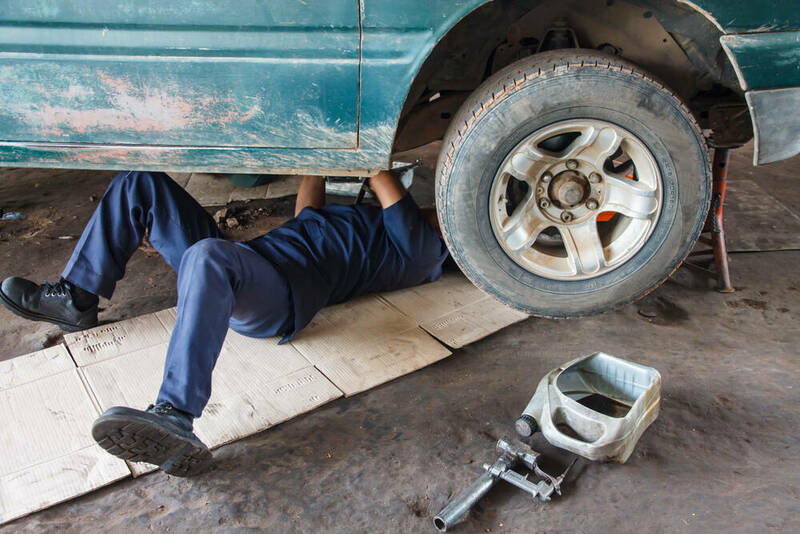 “We all remember bad times and bad deals. . . . Sometimes, though, life — and the people we encounter — they do something good, for no reason at all.” Shutterstock

I was probably in Tennessee. Maybe it was Kentucky. I am pretty sure it wasn’t Arkansas.

I was driving back north to Indiana from a visit to see my elderly parents in northwest Louisiana. I was kind of zoned out, as I tend to get driving interstate highways, thinking of my parents’ health, life, the miles ahead, the fleeting durations of time, childhood memories, my mom and dad getting old . . . when it occurred to me I was pretty close to that semi in front of me.

I was so close to the truck that, when the semi straddled a big truck tire, I had no choice but to straddle it, too.

The underbelly of my Subaru felt like it had been pummeled and gutted and scraped clean. And like I had been punched in my belly, too.

The car kept rolling, but I knew there just had to be some kind of mechanical destruction. I was lucky an off ramp appeared just ahead.

A little town. Not even a town really. Woodsy hill country. A few shambly buildings. Where am I going to find a garage, a mechanic, just off the interstate? Gas stations don’t have mechanics anymore. And it was 5:35 on a Friday evening. My stomach slid to the floor as I eased to a stop at the end of the exit ramp and looked left, then right.

There was a garage there. No way. At least it looked like a garage — a corrugated metal building with a cratered, weedy gravel yard and a motley spill of old cars in various stages of rust and disarray, windows whose broken glass looked like so many missing teeth in a fool’s grinning face — and AUTO REPAIR in weathered red letters. Lettering old enough to suggest a place long abandoned, a past life long forgotten.

I pulled in to take a look.

I got out and stretched out on the ground — sticking my head up under the front bumper — to assess the damage, expecting to see cables and wires and tubes hanging from the engine, oil leaking, liquids drooling from beneath the car. There was no such thing. Loose pieces of something maybe, stuff kinda hanging down. But no bleeding, no open wound or obvious rupture. But I do not know cars.

When I slid out, a mechanic was standing there. Jumpsuit covered in grease and grime. Youngish guy. Wringing his blackish hands on one of those soft, red cloths you see around gas stations and garages (and nowhere else). Stringy, matted hair and a face that looked like it had — since birth — been wedged into the dark recesses of motors and engines, brake pads and struts, fuel pumps and head gaskets, on all kinds of cars and trucks, both foreign and domestic.

He got right down on the ground and scooched up under the engine. “Yeah,” he said. “Yeah, I see.” Probably the oil pan, I surmised, or a brake line severed, or something I had never heard of. I knew I was in a bind, at his mercy. I had told him I was just passing through.

He slid out from under the car, hopped to his feet. I braced for the bad news.

“You knocked some stuff loose,” he said, explaining it was just a flimsy shield some automakers put up under an engine, doesn’t really do much good. “Nothin’ I cain’t fix with a few zip ties,” he said. “Ever-thing else looks fine.”

I looked at my watch. It was going on 6. Friday night. “The thing is,” he said, “I’ve gotta finish up this engine I’m workin’ on. I told the guy I’d have it done today. I’ve gotta get it done.” Here we go, I thought. Motel room for the night, maybe even the weekend.

“Tell ya what,” he said. “See that place over there?” He pointed. “It’s a Mexican food place. They’ve got good food. Go eat some dinner and come back. I’ll have it ready by then.”

He was right. The food was good. The waitress nice. A local ma and pa place that had good chicken enchiladas and rich, spicy salsa with the chips. I sat alone. I couldn’t see the garage from where I sat.

When I returned, the mechanic was just climbing out from under the car. “I thought about just pullin’ the shield off,” he said, “but I thought it best just to snug it back up. Where you’re goin’, it may help when you drive through snow. I think that’s what it’s there for.”

He refused to name a price; he refused to take my money. I stuffed a couple of twenties into his fingers, told him to keep it or give it to somebody he thought might need it.

I was on my way again, with a good memory and gratitude and good food in me and a real nice sunset back to the west as I headed on north in the descending dark.

Here’s the deal. Each Thanksgiving for about 10 years now, I have been telling stories of people to whom I owe a thank you. It’s sort of a Thanksgiving tradition — to maybe encourage others to do the same. To pass along some gratefulness.

The thing is, we all remember bad times and bad deals. Times life treats us mean, things that go wrong. Big and little things. People who rip us off or stuff that just really hurts. Life doles out plenty such.

Sometimes, though, life — and the people we encounter — they do something good, for no reason at all, seemingly. We need to recall those times, too. And remember them when we have a chance to do something kind or nice or good to someone else along the way. Without expecting, really, anything in return.

Like that guy in Tennessee. Or maybe Kentucky. Just a stranger in my path, who helped me on my way. As if he had been placed there for my benefit all along.