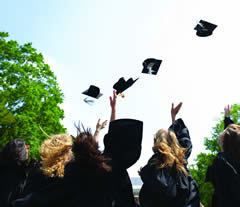 The University’s Spirit of Notre Dame campaign, which concluded this past summer after seven years of fundraising, generated more than $2 billion toward its $1.5 billion goal. Intended primarily to advance Notre Dame’s undergraduate experience, research and graduate studies as well as its Catholic intellectual life, the campaign was the largest ever in Catholic higher education and made Notre Dame the first university without a medical school to surpass $2 billion in a traditional seven-year capital campaign.

“The Spirit of Notre Dame campaign has been stupendously successful because each one of us has come together to affirm the value of a Notre Dame education and to imagine, collectively, a future for this University that is far brighter and more impactful than any one of us could have imagined on our own.” — Rev. John I. Jenkins, CSC, Notre Dame president

The Spirit of Notre Dame Campaign sought improvements to virtually every academic department and program, an extraordinary infusion of financial assistance for students, innovations to an already acclaimed undergraduate curriculum, widespread enhancements to the campus, an increased attention to Notre Dame’s role in a global society and a deepening of the University’s foundational Catholic identity.

“A comprehensive campaign like this, if considered a success, will have accelerated Notre Dame’s progress, focused the University’s funding priorities, spawned innovation, given the place greater exposure and in the end leave a true sense of accomplishment. Only time can judge this, but early hindsight would indicate that this campaign delivered like no other.”
— Dan Reagan, associate vice president for University relations and executive director of campaign administration

The campaign significantly aided graduate and professional students by generating nearly $94 million in new fellowship funds — not only addressing the issue of cost but also helping the University to attract a more accomplished and diverse crop of postbaccalaureate scholars.

The Law School has an increasingly competitive fellowship program, with the LSAT scores of last year’s class putting the school in the 93rd percentile of all law school applicants nationwide.

Notre Dame instituted its first-ever merit-based scholarship with the Hesburgh-Yusko Scholars Program offering individual awards of $100,000 over four years. The benefits go far beyond the monetary as the program also aims to develop students as leaders, and so incorporates a variety of potentially transformative enrichment experiences into the curriculum.

The largest gift ever made to graduate education at Notre Dame, the Richard and Peggy Notebaert Premier Fellowships, provides up to six years of funding, including tuition, stipend, health insurance and professional development support to exceptional doctoral students.

One of the pillars upon which the Spirit campaign was built is the notion of Notre Dame as the center of Catholic intellectual life. Throughout the campaign, benefactors responded to the University’s call to more aggressively recruit leading Catholic scholars, to expand the scope and influence of such signature entities as the Institute for Church Life, and to increase the University’s capacity for service to the Church and the world. Some $100 million was raised in direct support of Notre Dame’s Catholic character.

An anonymous donor has made it possible for the Notre Dame Haiti Program to implement a mass drug distribution effort in Léogâne. In a nation where nearly a third of the population is infected with lymphatic filariasis, the deworming drugs and fortified salt promise to go a long way toward reducing — and, ultimately, eradicating — the mosquito-borne disease.

The Keough-Hesburgh Professorships have helped to attract one of the most influential microeconomists in the world, a path-breaking nanobiologist who has launched a Notre Dame program in synthetic biology, and an international authority on liturgical music — all top flight scholars with a deep and manifest commitment to advancing the Catholic mission of Notre Dame.

The University launched its Ford Family Program in Human Development Studies and Solidarity within the Kellogg Institute for International Studies. The program examines the challenges confronting those living in extreme poverty, with special focus on sub-Saharan Africa. Undergraduate education and research are complemented by outreach in local communities.

The Keough-Naughton Institute for Irish Studies, beneficiary of Spirit campaign resources, is now acknowledged as the flagship program in Irish studies throughout the world.

Some 417 Endowments for Excellence now support academic departments, programs and initiatives across the University. Only 124 such endowments existed at the start of the campaign.

A major cross-cultural research project, Contending Modernities: Catholic, Muslim, Secular, was launched in partnership with scholars and educators from around the globe. The project aims to develop a better understanding of religious violence and of the clashes between religious and secular forces — and to use that knowledge to address some of the greatest challenges of the 21st century.

The founding of the Glynn Family Honors Program in 2006 added vibrant new dimensions to the intellectual growth of ND’s most accomplished undergraduates while also helping to foment a broader shift on campus — one in which undergraduate research, post-baccalaureate education, and deep faculty and student mentoring relationships are even more highly prized.

Students of the arts now have access to some of the world’s most celebrated performers, through artist residency programs that bring first-rate musicians, actors and dancers to campus for stays of a week or longer. As a result, Notre Dame and surrounding communities experience performances unmatched throughout the region, while students participate in intensive master classes under the tutelage of gifted artists.

Some 156 undergraduate science majors presented their research findings at the most recent Undergraduate Scholars Conference (nearly quadruple the number who presented at the first conference in 2007).

The Kroc Institute for International Peace Studies welcomed the first students of its new doctoral program in peace studies in the fall of 2008. The program is one of only a handful of its kind in the world — and positions Notre Dame as a global leader in preparing scholars and professionals equipped to help build a just and sustainable peace.

Buoyed by an infusion of campaign funding for faculty, facilities, graduate programs and research, Notre Dame announced in 2010 that, for the first time, the University had garnered more than $100 million in external research awards.

Another milestone gift to the Nanovic Institute for European Studies has, among other major benefits, dramatically enhanced the institute’s ability to provide undergraduate students with transformational learning experiences throughout Europe.

Notre Dame’s renowned infectious disease programs were amplified many times over with the formation of the interdisciplinary Eck Institute for Global Health. Committed to the notion that health is a fundamental human right, faculty and students affiliated with the institute endeavor to advance health standards for all people, but especially for the poor who are disproportionately impacted by preventable diseases.

The creation of the Harper Cancer Research Institute marked a bold new step in the partnership between Notre Dame and Indiana University School of Medicine. The institute will combine the research strengths of each university with the expertise of the regional medical community to quicken the pace at which new treatments and diagnostics are discovered, developed, tested and, ultimately, used to improve and save lives. 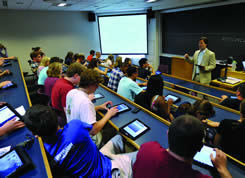 For the second year in a row, the Mendoza College of Business has been ranked No. 1 in Bloomberg Businessweek’s annual survey of The Best Undergraduate Business Schools. The program was cited for excellence in international study, undergraduate research opportunities and an ethics-focused curriculum — all areas that have received significant campaign support.

The number of undergraduate students engaging in original research and creative projects has grown — and then grown again. During the 2004–05 academic year, for example, the Undergraduate Research Opportunity Program in the College of Arts and Letters awarded research grants to 60 students; 130 undergraduates received those awards in 2010–11.

Sixty-eight percent of Notre Dame alumni contributed to the campaign, with those gifts totaling $1.109 billion.

Benefactors to the Spirit of Notre Dame campaign contributed $42 million for the Hesburgh Libraries — plus an additional $1.3 million to the Kresge Law Library. These monies arrived at a critical time, as academic libraries around the world, including our own, are striving to make the transition from information repositories to something much more complex, dynamic — and digital.

Perhaps no gifts have done more to advance the mission of Notre Dame than contributions to endow professorships and directorships. Close to 50 named faculty positions were created through the Spirit campaign. These positions have assisted the University in recruiting a new class of superlative teachers, scholars and researchers, noted for their work in fields as diverse as Catholic theology, journalism, business management and environmental remediation.

Contributions for capital projects topped $453 million, resulting in 14 new facilities and an improved Notre Dame campus. Half of these were academic buildings: cutting-edge teaching facilities, laboratories and research space to rival any university in the nation, a fully modernized law library, a technology park meant to funnel research breakthroughs into the marketplace. The campus expansion includes new residence halls and four new athletic facilities to help Irish student-athletes compete at the highest level.

Of the $2.014 billion raised, more than 28 percent came in the form of expendable dollars, given primarily to the annual fund and to the various recognition societies offered by the development operation. Since the campaign launched, the Notre Dame annual giving programs have received gifts totaling $243,371,087. These resources have enabled the University to provide scholarships, enhance academic and research programs, expand its global outreach and service, strengthen initiatives related to our Catholic mission, and fund critical University operations.