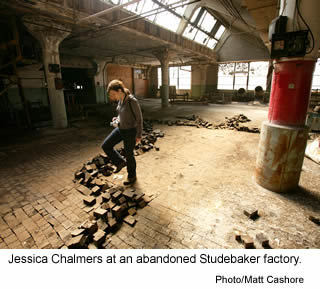 The near south side of South Bend once smelled of sweat and security. Workers poured in and out of the giant Studebaker factories there, making cars, making healthy paychecks. The monstrous brick buildings denoted a vibrant community living off the profits of heavy manufacturing.

When Jessica Chalmers arrived as an assistant professor at Notre Dame in 1999, the Manhattan resident had never been to the Midwest. Driving around her new community, she soon learned why northern Indiana is considered part of the Rust Belt.

“I became intrigued by those buildings downtown—how haunting they were,” she says. “The town was co-habitating with its ghosts.”

Those stark, brooding reminders of the 1963 closing of the automotive manufacturer still hover over the town. For the playwright Chalmers, that eerie feel channeled her creative energy. “The idea of a ghost story came to me,” she says.

And so was born Avanti: A Postindustrial Ghost Story. The multimedia theater production is set to premier in South Bend in September. Plans are being made to stage the performance piece in other cities, including Chicago and New York.

In 2000, Chalmers won an Obie, Off-Broadway’s highest honor, for her script of Jet Lag, a project that combined live performances with multimedia. Avanti, named after the futuristic car that Studebaker pinned its dying financial hopes on, will be on that same cutting edge, with actors, videos and 3-D imaging all contributing to the theatrical production. Avanti is being co-produced by Notre Dame and The Builders Association, a New York City experimental theater company that specializes in fact-based fiction.

The narrative begins when a demolition crew discovers the Ghost of Studebaker in a storage tank at an abandoned Studebaker factory. One of the workers is sucked into the final days of Studebaker, where he witnesses the closing that brought the city of South Bend to the brink of economic ruin. Throughout the production, the shadowy figure of the pension-loser, a symbol of the workers who faced personal ruin when their jobs and, for some, their pensions disappeared, haunts the stage. “There were suicides at the time,” Chalmers says.

The scriptwriter wants the production to speak on three different levels: The first is the Studebaker story itself, the story of an independent company that started making horse-drawn wagons and carriages and, as time went on, cars and military trucks. The automaker became South Bend’s largest employer, and the city’s fortunes mimicked the company’s boom and bust cycles.

In a more general way, she says, the story also points to “the shifting economic and labor conditions in America,” as the country moves from a manufacturing to a service economy.

Finally, there is the global effect. “I see it as a comment on outsourcing,” Chalmers says.

Before she began writing the ghost story, Chalmers interviewed former Studebaker employees and dug through available archives. She was allowed to tour one of the abandoned factories. During that visit, she saw some giant pits filled with liquid. “These are dangerous places—toxic,” she says. A perfect place for a ghost to materialize, it seems.

The perfect place for the production, it also seems, will be a small industrial portion of Union Station in downtown South Bend. “It’s site-specific theater,” says Robin Slutsky, producer of Avanti.

Chalmers says she originally wanted to have the show at one of the former Studebaker plants, which would have offered “a theatricality that’s built into the place itself.” The presence of toxic materials in the factory put an end to that hope.

In mid-May, Chalmers was still working on the script. “I come out of the avant-garde, where the process of making something is as important as the product,” she says.

For Avanti, that process involves the entire community. This summer South Bend Regional Museum of Art is showcasing the working process of the production, including photos of the industrial decay. “Even the wreckage is fascinating,” says Slutsky. The Northern Indiana Center for History will highlight images from the industrial period. Lectures, art projects by school children and area museum displays also are planned. A website listing dates of performance and other information is at www.nd.edu/~avanti.

“It’s more than a South Bend story,” says Slutsky, “but at its core, its heart is here.”