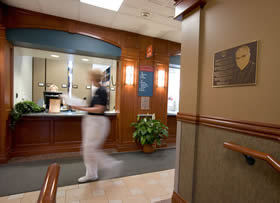 When Annie Kleva first walked into the Student Health Center in 1994, she found a facility that too closely resembled the infirmary built for students and Holy Cross priests during the Great Depression. The director of University Health Services looks back on those days with a shudder and a smile.

A single thermostat kept some patients sweating in their beds while nurses on other floors pulled on extra sweaters. A hodgepodge of window-unit air conditioners cooled rooms in summer and marred the harmony of the building’s Collegiate Gothic exterior. Turning on a blender to prepare food for special diets could short-circuit the antique fuse box.

“We often had birds in the basement because the windows were broken down there, and the screens were falling out because they had rust. It was the original 1930s material,” Kleva says.

That was then, this is now. Relocated to the old campus security building in 2005, the health center and the University Counseling Center have moved back into their old home, now called Saint Liam Hall. While workers gutted the old building and installed new plumbing and new electrical, ventilation, climate control, security and fire-protection systems, little about the edifice has changed, not even the original, 72-year-old slate roof that showed minimal wear. The window units, of course, are gone, and the hawkeyed visitor might spot the new vestibule on the building’s east side, despite brickwork that is nearly identical to the original.

The interior, by contrast, has fully slipped its skin. Spaces were remodeled on each floor to better fit contemporary needs and accommodate the arrival of the Office of Alcohol and Drug Education, which now has at least three times the room it had in its LaFortune Student Center location.

Another new addition, a satellite physical therapy center run by a local provider, means students, faculty and staff won’t have to travel off-campus for rehabilitation appointments. A wellness room, a gift from the Class of 2004, offers a massage chair, a daylight lamp and other comforts for weary minds. Most of Saint Liam’s medical equipment is new, too, including the X-ray and EKG machines and the state-of-the-art beds in the examination and patient rooms.

In health care, perception counts for a lot. Kleva says the upgrades have dramatically improved accessibility, convenience and peace of mind for students who enter the three-story building seeking medical care or counseling for personal issues ranging from time management to depression to drug use.

“We’ve always maintained an excellence in the level of care that is appropriate for students receiving services,” she says. “But the environment in which we’re now able to practice is like coming out of the dark ages.”

As with any renovation, much was worth keeping, including the terrazzo flooring in the stairwells and the crucifixes Kleva polished and hung throughout the center in time for its dedication. She’s collecting other items for a display case: a handmade sign advertising crutches for $5, a glass-bulb syringe, an original telephone.

Still, why “Saint Liam Hall"? “Liam” is the clipped, modern Irish form of William; naming the hall for Saint William of York honors the late father of William K. Warren Jr. ’56, whose foundation contributed $8 million to cover most of the hall’s renovation costs.