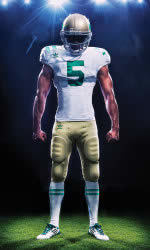 Any given Saturday during football season, the Hammes Notre Dame Bookstore is brimming with students, alumni, parents and friends looking for that perfect piece of Irish apparel.

Whether it’s The Shirt or the jersey of the season’s MVP, the options for fan gear seem endless. And with one walk across campus — game day or not — even a non-Domer will see the importance of ND-specific clothing.

But what happens when fashion makes its way onto the football field?

The Notre Dame football program has been synonymous with tradition for generations. From the gleaming gold helmets to a stadium intentionally void of a JumboTron, ND has made being classic a trend. Though green jerseys or special green accents have been utilized occasionally since the early 1900s, this football season saw changes that were more uniform — pun intended.

Celebrated former Notre Dame linebacker Maurice Crum Jr. ’08 described the new uniforms as “a great twist on a classic and a way to uphold the Irish tradition while being modern.”

The Irish first entered the world of style when they donned the “Under the Lights” throwback-style uniform for the Sept. 10, 2011, match-up against storied rival University of Michigan. The standard blue-and-white jerseys received some friendly competition from this adidas-designed version consisting of a white jersey with kelly green stripes paired with classic gold pants and the first shamrock-emblazoned helmet worn since the 1960s. Though the game ended in a heartbreaking loss, the uniforms remain a standout moment of the game in more ways than one.

Besides providing water cooler fodder for the following Monday, the uniforms also presented the University with a marketing opportunity by playing off of fans’ purchasing power and offering the retro-style jerseys for purchase.

The Irish pushed the bounds a little more a few weeks later when they descended on the Washington, D.C., area for the November 12 showdown against the Maryland Terrapins. This time, the Notre Dame helmets, gilded enough to rival the famous Dome, featured a shamrock design similar to that utilized for the Michigan game, but one writ larger in both size and flair. The helmet also displayed another deviation from the standard with a green facemask, a far cry from the traditional gray.

The uniform changes for this match-up were especially significant because they were the first displayed in a Shamrock Series contest. The neutral-site games in which the Irish face big-name opponents at even bigger-named venues will take the Irish to Chicago’s Soldier Field this fall for a (near) home game against the Miami Hurricanes, with a trip to Cowboys Stadium to face Arizona State the following year. Fans will be watching to see just how big and bold the team will get with its uniform tweaks and eye on style.

But is one shamrock-splattered helmet more than enough?

“I’m the biggest fan of the famous gold helmets . . . spray painted by students and then worn the next day at the game. They are the purest form of gold you’ll find on any athletic uniform,” stated SectionB blogger Alex McNamee. “And with the awful helmets [worn for the Maryland game], Brian Kelly is getting rid of that. . . . Respect tradition. Stick to it.”

However, the players seemed to enjoy the more brazen looks for the field. Some even took to Twitter and Facebook to playfully brag. Former Irish running back James Aldridge ’10 also enjoyed seeing something different on the field. “I like the new look because it is simple but has a modern touch,” he said. “It definitely feels like we have caught up with the times as far as our uniforms go.”

Some players went an extra step to pep their uniforms on their own. Kyle Brindza, Notre Dame’s freshman kicker, caused quite a stir with his electric-green cleats, which he described as a random bit of fashionable fate when he received one pair of purple and one pair of lime green cleats from Adidas.

Brindza told ESPN he saw “no other choice” when selecting his fancy footwear. “I wasn’t wearing . . . purple shoes.”

It is unlikely that Notre Dame will go as far afield as some universities have with future on-field looks, but perhaps some continued flair will add a (kelly green?) line or two to college football’s most storied program.