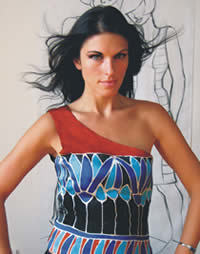 Catherine Langford was leafing through Elle magazine when she saw her sister—well, figuratively speaking. A contest had been announced looking for women with “Winning Style,” and she just knew that her little sis, Christina Wolf ’02, was born to enter.

Sure enough, in the January 2006 issue, Wolf was featured as one of the winners, soon going from being an advertising agency designer to appearing in Chicago’s Fashion Week with her own eclectic line.

“Growing up,” says Wolf, “I had designed my prom dress [turquoise and silk, no less], and I was always looking through fashion magazines and wondering how I could be a part of that world.” After doing the Elle shoot in Cancun, the South Bend, Indiana native realized it was time to stop wondering and start doing.

“I just couldn’t go back to my old life after that experience,” says the 27-year-old. “People would stop me on the street and ask me where I got my clothes. Fashion seemed to be something I was good at, and I had to know what could happen.”

Among Wolf’s most featured items are spring dresses, still using silk in dye form and hand-painted by the designer herself. “I actually think you can tell stories through clothing. It makes it more than just something to wear. It makes it alive.”

Eric Butterman is a New York-based writer and creator of the seminar “Public Speaking To Improve Your Company’s Bottom Line.” He can be contacted at ericbutterman@yahoo.com.