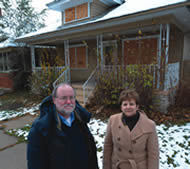 On the first day of her Legal Aid & Ethics class, Judith Fox typically hands her students a mortgage file that contains a complicated subprime loan of the kind with which her clients are often saddled. Together they pore over the paperwork for hours, trying to figure out how much was borrowed and how much the client would actually be paying.
“And in five years of doing that,” the seasoned consumer attorney and Notre Dame law professor reports dryly, “I have had only one student, who happened to be a former loan broker, who could read the paperwork and tell me what it said.”

The original idea behind “subprime” loans was a reasonable one ratified by public policy: Expand homeownership by tinkering with variables such as interest rates, loan terms and down payments, which had long required prospective buyers to build up substantial personal savings before seeking out their piece of the American Dream. But the reports Fox gets back from former students who are trying to launch lives and careers in other cities illustrate a number of troubling practices within the lending industry that led to an explosion of home foreclosures nationwide in 2007 and sent shockwaves into an already volatile global economy.

Two former students insisted on reading the paperwork at their closings and were almost thrown out by indignant title officers. Another threatened to walk away from a purchase in Boston when her lender wouldn’t offer her the traditional, 30-year fixed-rate mortgage she wanted. The lender was pushing her toward an unnecessary no-interest loan with an adjustable rate that kicked in after five years.

Such tales are nothing compared with the foreclosure horror stories Fox hears at the Notre Dame Legal Aid Clinic, where second- and third-year law students provide clients with free legal services.

One elderly woman had purchased her home with a legitimate 1-percent redevelopment loan brokered by the City of South Bend, but she was later pressured by a separate broker into refinancing at 12 percent. She had filled out a loan application stating her real income at $700 a month, but a separate application filled out the same day in her name claimed she earned $2,700. “There was a $10,000 cash-out, and no one knows where it went. It’s just gone. And this lady is completely senile,” Fox says, shaking her head. “She kept asking me if I was her dentist.”

Normally, Fox’s Economic Justice Project at the clinic handles consumer cases of all kinds, but lately mortgage foreclosures have become all-consuming. Aggressive and unscrupulous mortgage brokers on the hunt for easy commissions are just the beginning. At the height of the crisis, underwriters at national lending institutions weren’t verifying income reports but instead greenlighting everything that came across their desks. Appraisers who wouldn’t cave to the pressure to submit inflated appraisals lost work. Mortgage servicers took their cut through hidden and inflated fees and severe prepayment penalties.

At the top of it all, Fox says, was Wall Street with its mortgage-backed securities. “Instead of the demand being people looking for money to buy homes, which would be the way it should work, the demand was coming from the top,” she says. Go get us mortgages. “Well, if you’re a broker, you’re going to get your commission. . . . The risk was so far removed that these guys had nothing to lose by making lots of money fast and skipping town or whatever. And the point has to be made: A lot of what they were doing was not illegal. It should have been, but it wasn’t.”

Mortgage foreclosures were an acute problem in Indiana and other Midwestern states long before the precipitous drop in home prices that has forced thousands out of homes in the once white-hot suburban markets of the “housing bubble.” Fox says the foreclosure problem as reported by the media has focused too much on homebuyers who signed for overpriced McMansions based on creative financial gambles and walked away when the value of their homes collapsed.

“I don’t have a lot of sympathy for that,” she says. Obscured in that picture, she argues, are the systemic, predatory abuses found throughout the subprime mortgage experiment that are dragging low-income homebuyers into foreclosure in cities like South Bend, where home values remained relatively stagnant.

“I know there are legitimate mortgage brokers out there who have been doing a good job for years, but the industry didn’t police itself very well,” Fox says. One result is that homeowners facing foreclosure may now have recourse to legal defenses that weren’t available to past generations, for whom failure to make the monthly payment on their predictable, fixed-rate loan was a cut-and-dried matter decided in banks’ favor as a matter of course. And Fox makes this further distinction between local banks and some mortgage brokers who work with out-of-town lending institutions: “I have never seen anybody get a predatory loan who walked into a branch of their local bank and applied for a loan. Never.”

Fox didn’t handle many foreclosure cases until she attended a 2006 event at which a judge reported being drowned in mortgage cases. City officials, alarmed by the rapid growth in the number of vacant and abandoned properties across town, blamed skyrocketing property tax bills triggered by a controversial measure that had passed the Indiana legislature in 2002. Based on the stories her clients were telling her, Fox suspected subprime lending was the likelier culprit.

She teamed up with Notre Dame sociologist Richard Williams, who had already co-authored several papers on local and national trends in home mortgage lending. Williams had argued that federal policies designed to drive up homeownership among minorities and low-income homebuyers — longtime victims of discriminatory practices that discouraged homeownership and left them wary of dealing with local banks — had created a “new inequality . . . characterized by less favorable loan terms . . . and a lack of adequate consumer protection from predatory and abusive practices.” Contrary to traditional lending practices, which had turned a corner and begun to foster racial integration, Williams and his colleagues found that subprime loans were in some cases increasing segregation.

Aided by graduate student Brian Miller and a community-based research grant funded by South Bend entrepreneur Rodney F. Ganey and awarded by Notre Dame’s Center for Social Concerns, Fox and Williams combed through paper records of foreclosed homes sent to sheriff’s sale in Saint Joseph County. They compared this information with lending data gathered under the federal Home Mortgage Disclosure Act and a 2006 inventory of vacant and abandoned buildings conducted by the City of South Bend. They counted 8,050 foreclosures in the county between 2001 and 2007.

For many, the woe doesn’t end with foreclosure. Fox has seen banks hold on to foreclosed homes rather than auctioning them to a glutted market. Technically this means the “former” owner still owns the home and is responsible for property taxes, code violations and a $500 registration fee South Bend requires from owners of abandoned properties.

Now Fox represents several people suffering yet another swindle: Mortgage “workout consultants” who purport to help people renegotiate their loans and whose financial interests are served by keeping clients in foreclosure. Many such companies are under Justice Department investigation. Come spring, Fox says her advanced Legal Aid class will devote its time to crafting new legislation that would subject such companies to heavier regulation.

She cites some victories, such as loan modifications for clients that lowered their interest rates. Meanwhile, based in part on data in the Ganey report, South Bend is requesting nearly $1 million in federal aid authorized under mortgage relief legislation passed last summer that will help it purchase and rehabilitate abandoned properties. The report also advocated the creation of a property information database that would foster further collaboration among academics and community leaders.

Fox believes the subprime lending portion of the home foreclosure problem has peaked, but she expects the scam artists will be back. She says the best defense is basic financial literacy: Giving people the background they need to ask questions and protect themselves. They’ll need it, she says, because even people who have stable jobs and mortgages should keep an eye on their credit cards, which she argues suffer from the same kind of under-regulation found in home loans. Her daughter, a Notre Dame junior with no personal income, gets preapproved credit card applications in the mail every day.

“That,” she warns, “is the next big balloon about to burst.”