On a cold, clear Saturday this past November about 10 O’Neill Hall seniors stand atop a yellow school bus, punching keyholes into sky-blue cans of Hamm’s Special Light. It is 12:03 a.m., and they are attempting to set a Guinness World Record for Largest Synchronized Shotgun. Layered in their warmest Notre Dame paraphernalia, they toss beer cans into a large crowd of parkas, and the students make athletic, one-handed catches and tear keyholes of their own.

“No one has fallen off the bus yet,” I am told. The tailgating ship, a 1990 Bluebird International school bus, has been a magnet for Notre Dame students partying off campus before home games since August 2013.

With the crack of 150 icy aluminum cans, the World’s Largest Shotgun is underway. No Guinness Book representatives are on hand. No one seems to mind.

Parked in a gravel driveway three blocks east of Notre Dame Stadium, The Bus is incorporated as a limited liability company (LLC) and is a Notre Dame tradition in the making. 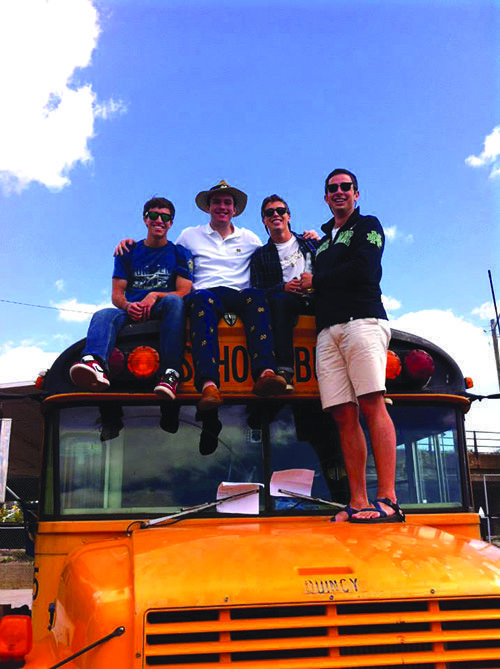 Its story begins with a trip to a lake house owned by Danny Winnike’s parents in White Pigeon, Michigan, a village of about 1,600 people about four miles north of the Indiana Toll Road. Winnike ’14, Calvin Hemington ’14 and several friends were driving by a grocery store near Klinger Lake when, says Winnike, they saw “this yellow school bus in this sort of desolate field on the side of the road.” A black and orange “For Sale” sign hung in the window.

“We had time to kill,” Winnike says. The group pulled over. They wondered if they had just stumbled onto a tailgating machine. “We were all sort of in a circle joking around about buying it, but I think deep down each person wasn’t joking and thought everyone else was,” he says.

Seeing the impracticality of parking and maintaining a bus as a group of on-campus sophomores, they postponed a decision. But the tone had shifted as the group idled around the field for a few more minutes. The idea had been laughed about but not dismissed.

The Bus had been a tailgating machine well before the group stenciled it with “UNIVERSITY OF NOTRE DAME” in black letters prior to the home football opener in 2013. It had been purchased from the Quincy, Michigan, school corporation for tailgating at NASCAR races. Its previous owners gutted the interior, placed a Plexiglas partition between the driver’s seat and the rest of the bus, and added a nondescript couch and a tattered restaurant-style booth along the left wall of the bus. They covered the booth cushions in sheets bearing NASCAR legend Jeff Gordon’s name. Dale Earnhardt Jr. curtains hung on the windows. Near the back was a minifridge, microwave and bedroom area. A mattress lay haphazardly over a wood laminate frame. The Bus had 127,000 miles on its odometer.

Driving again in White Pigeon two summers later, Hemington and Winnike were surprised to find the bus still parked by the road and still for sale. Feeling that this was an opportunity too good to pass up, they asked about purchasing it. The owner said The Bus had provided eight years of tailgating at races from Indianapolis to Daytona. “This has been a great camper/race bus and will make someone else a great one, too,” he told them.

The duo started pooling cash in a Facebook group of O’Neill seniors. With verbal commitments from 23 hallmates, they wired $4,500 to the seller, then picked up The Bus and drove it to South Bend a week before the fall 2013 start of classes.

A rickety bus in the hands of college seniors raised plenty of issues. Who would drive it? Who legally and physically could drive it? If something went wrong, could the owners get sued?

The first hurdle was taken care of for them. The Bus had been previously registered as an RV, removing the requirement that its driver have an Indiana Commercial Driver’s License.

The second hurdle was cleared with the assistance of Hemington’s father, Matthew Hemington, a practicing attorney. He helped incorporate The Bus in Delaware as a limited liability company for a $75 registration fee, a $50 annual reporting fee and nominal yearly income tax. If The Bus were to be sued, none of its 23 members could be held liable for any more than their initial investment — about $250 each — and this protection could be transferred yearly to a new crop of owners.

Being an LLC also meant The Bus owners could apply for corporate auto insurance, a cheaper and less complicated option than tacking The Bus to someone’s personal insurance and transferring it year after year. Paul Mickan ’14 was put in charge of this last step. “I was the one with the cleanest driving record,” he says.

When he got off work early one Friday at his summer internship in Chicago, Mickan called Progressive’s corporate insurance line to register his new company. The sales representative’s questions were routine, yet completely unanswerable. “Tell me a little bit about your company,” he began. “How much revenue are you expecting for this year?” After some dodgy answers (“We’re a tailgating company” and “We haven’t run the model yet”), the truth came out. With a wink and a nod and an understanding (“I have family in Elkhart”), The Bus became insured as a “catering company” for a student-friendly price.

With their legal safety net in place and Jeff Gordon upholstery left as-is, our heroes began their tailgating enterprise. Despite all the legal hoopla, The Bus has no formalized leadership structure. Tailgates are coordinated through a GroupMe text messaging thread and a Facebook Events tool. Whichever owners have the most free time on a given weekend head up the planning. Ownership has been passed through O’Neill Hall, but Bus tailgates draw a larger community of upperclassmen and parents together. As Winnike says: “The Regatta’s a Fisher thing, but everyone goes to the Regatta. The same could be said for any of the other millions of traditions around campus.”

The 2013 Michigan tailgate in Ann Arbor was reputedly the biggest and best Bus tailgate ever thrown — despite Notre Dame’s loss in The Big House. Upwards of 400 people drank Keystone and Natty Light, with ND chants “stirring the pot a little bit,” says Winnike who notes that a middle-aged, maize-shirted Michigan alum called it “the most impressive opposing team tailgate I’ve ever seen here.” Last May’s Kentucky Derby tailgate, with 250 debonair seniors walking around in head-to-toe seersucker, is also fondly recalled.

That senior class, nearing graduation in May 2014, had found a crew of 20 juniors to inherit The Bus, but storing the machine for the summer presented problems. The seniors called on Mohamed, a South Bend cab driver they knew personally, and, for $100, Mohamed was happy to store The Bus in a South Bend junkyard he operated with a longtime business partner.

When current co-owners Jack McKeon ’15, Patrick Butler ’15 and Mike O’Neill ’15 went to reclaim The Bus in September, they learned that over the summer Mohamed and his business partner had had an irreconcilable falling out. The Bus was in a different junkyard. But Mohamed’s business partner had the keys and hadn’t returned any of the three dozen phone calls the gang had made. So, 20 hours before the September Shamrock Series Purdue tailgate, our heroes had a reserved space in the lot at Lucas Oil Stadium in Indianapolis but had nothing to park in it.

The Bus turned on. But it wouldn’t move.

The gang pulled out their smartphones and started researching. “Buses have this weird air-pressure brake system, where the pistons don’t unlock unless there’s appropriate amounts of air pressure in the system,” Michael Judd ’15 says. “So the engine was on but the wheels were locked.” It was 4 p.m. on the eve of the game.

They called Mohamed again, and he gave them Ron, a middle-aged mechanic in a red flannel shirt with thin, wispy hair, a thick beard and at least one black lung. Back at the junkyard, Ron concurred with the diagnosis, pointing to a valve under the hood that was leaking what Judd describes as “unnatural amounts of air.”

It was nearing 5 p.m., and they were not ready to give up. At a nearby O’Reilly Auto Parts store, Ron and a green-shirted O’Reilly’s employee searched the aisles and, for $4.25, came away with a piece that looked like it could do the job.

It worked. The Bus moved. At 6:30 p.m. it left the junkyard for Indianapolis. At 10:20 it arrived at Lucas Oil Stadium. At 2:30 a.m. 14 haggard seniors walked in from their night out in Indianapolis and collapsed in their mobile bedroom. At 8 a.m., sun peering through the Dale Jr. curtains, they rose for the first Bus tailgate of 2014.

“We would always have a mechanic on call,” says Hemington, laughing about the Bus-centered shenanigans and narrowly averted disasters: The Bus’ engine stalling inexplicably on South Bend Avenue during an emotionally charged April bar crawl; a bulging tire looking to burst en route to the Kentucky Derby; a fender dent from a hurried escape at a West Lafayette parking lot; and a crack in the engine coolant reservoir discovered halfway between South Bend and Indianapolis. Now, McKeon says, “Every time we stop for gas, we pour coolant into the engine.”

The mechanical issues are small setbacks that only add to The Bus experience. The neat stack of insurance paperwork and the sticky tabletop of upended SOLO cups it sits on are both products of these 22-year-olds’ hard work and entrepreneurial spirit.

There’s also a sense that The Bus has more ahead of it than behind it. As Paul Mickan says, “It’ll go until it dies.” With enough blue containers of Hamm’s Special Lite and engine coolant, that day could be quite some time from now.

Alex Caton is a senior from Geneva, Illinois, majoring in political science.