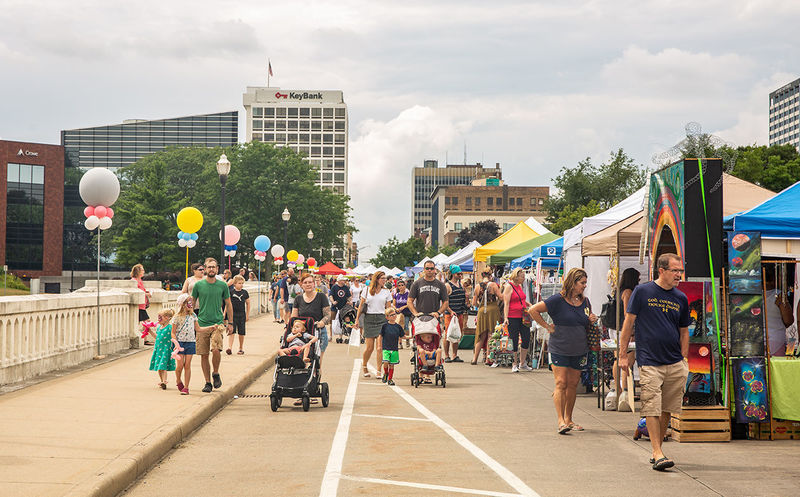 Art Beat attracts hundreds of visual, performing and culinary artists from around the region for a daylong showcase. They display their wares under colorful canopies spread across the Jefferson Boulevard Bridge. Thousands of browsers wander among paintings and photography, ceramics and sculpture, clothing and jewelry. Actors, dancers and musicians perform throughout the day. And tempting scents from local restaurants suffuse it all.

The festival has become downtown’s largest annual event, attracting more than 15,000 people on average. It puts an exclamation point on South Bend’s unofficial outdoor arts season, which in a typical, nonpandemic year includes the two-day Leeper Park Art Fair in June, a tradition dating to the 1960s. Events such as the outdoor performances of the Notre Dame Shakespeare Festival’s Touring Company and the Fridays by the Fountain concerts on the lawn of the Morris Performing Arts Center further enliven the city’s artistic life during the all-too-brief summer.

Although it’s a relatively new addition to the calendar, Art Beat has become one of the city’s most anticipated events since it began in 2003 as the brainchild of a group in the Leadership South Bend/Mishawaka program. Held on a September weeknight in its first few years, it drew a loyal following with its simplicity and approachability. Purveyors set up folding tables under curbside pop-up tents anchored by plastic jugs filled with sand and water.

It soon outgrew these modest beginnings. Organizers have developed a selection process for participating artists, and visitors easily lose themselves for hours among the displays.

As big as the event has become, it has stayed true to its local roots. Only artists from St. Joseph and seven neighboring Michiana counties are eligible to participate.

“Art Beat is like returning to your favorite hometown restaurant,” says Kylie Carter ’02, director of marketing and events for Downtown South Bend, the nonprofit that organizes the showcase. Regulars find familiar faces and items alongside intriguing additions presented in a welcoming environment. “It’s a day of inclusion and belonging,” Carter adds, “creating a space for new opportunities.”

One of those new opportunities is Off Beat, highlighting the shops, galleries and restaurants in the East Bank Village just across the river from the city center. Fire Arts is one example, a cooperative studio on Colfax Avenue founded in 2004 to provide member artists shared space and equipment as well as exhibitions and education programs.

“The links between the health of a city and opportunities for all residents to connect and participate in the vitality of their community are becoming increasingly clear,” Carter says. “In many ways, Fire Arts has become a catalyst for revitalization, instilling pride, belonging and a greater understanding of what can be done by creatively working together.”

Brick-and-mortar businesses such as Piser Designs, which produces handcrafted furniture, and Circa Arts Gallery, whose offerings include tile and woodworking, stained glass and jewelry, also get a boost from the Off Beat spotlight.

Until last year, Art Beat unfolded along Michigan Street from Colfax Avenue on the north to Wayne Street on the south. A road improvement project in 2019 forced the gathering to move to Jefferson Boulevard. For the foreseeable future, that will remain Art Beat’s home.

“We needed to shake it up,” Carter says. “It’s something we’ve discussed for years, but with Michigan Street out of commission, it allowed us to pull the trigger on a new layout — and it’s reinvigorated the entire event.”

Whatever its location, the impact on the city’s culture, economy and confidence lasts all year. “Art Beat has boosted the community’s spirit and self-image beyond what anyone could have imagined,” Carter says. “It’s now part of South Bend’s collective identity.”