A comedian once joked that a Donald Trump-guided tour of New York City would begin, “Own it. Sold it. Built it. Own it. Buying it.” A tour of South Bend’s Potawatomi Zoo with Lloyd Ketchum has a similar feel, minus The Donald’s egocentrism. It’s not that civil engineer Ketchum has become a wildlife tycoon in his retirement from full-time teaching. It’s just that the fingerprints of the students in his Civil Engineering Service Project seminars are everywhere.

Some years ago, Ketchum took kayak lessons from a man who worked in maintenance at the zoo. Ketchum mentioned his career-long habit of putting students to work on real design projects for clients in the community, and a symbiotic relationship between city zoo and engineers-in-training was born.

Ever since then, the emeritus professor of engineering says, he’s visited the Potawatomi Zoo, rated by Child magazine in 2004 as one of the nation’s best zoos, three or four times a semester. Notre Dame is not the consultant of first resort and won’t take projects that require a quick turnaround. “We more are meddlers,” acknowledges Ketchum. But consider what students in his service project seminars have accomplished: They’ve mapped the zoo’s water and sewer systems, created more effective signs directing street traffic to the zoo, staked out the route of the kiddie railroad and designed its station, planted a tree farm, and proposed water conservation and treatment plans.

The zoo’s relationship with Notre Dame is unique, says Terry DeRosa, zoo director. “What it gives us is a plan to improve the exhibits based on their recommendations. We love having the engineers come out here.”

Zoos are dynamic places. Ketchum views them as cities in miniature, complete with bridges, roads, buildings, animals, people, challenges and contingencies. This makes them perfect places for an aspiring engineer to learn by doing.

“The designs of the new exhibits are probably the most fun,” he says. Students research the animals, interview their keepers, visit zoos great and small across the region, and study the exacting guidelines for animal care and exhibit quality set by the Association of Zoos and Aquariums. In 2004, the engineers collaborated with anthropology students to study the zoo’s new cotton-top tamarins and figure out a way to safely exhibit them outdoors. Two years later, the completed train project forced tortoises from their home, so the engineers created a new habitat and added a tortoise-themed play area for little visitors. 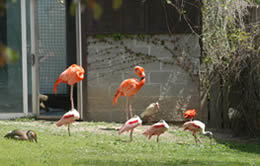 This year, DeRosa’s requests included ideas on how to reshape the zoo’s small flamingo exhibit so the sensitive birds could breed their young and expand their numbers from two to 20. Claire Laurentius, then a junior, and her team took on the project and learned that the flamingos, Potawatomi residents since 1992, prefer areas free of the kind of heavy vegetation that can easily hurt them. They’re unsettled by frequent human contact and don’t mix well with many other kinds of birds—currently they share quarters with a quartet of roseate spoonbills and several other wading avians. If pinioned to keep them from flying, they are much less likely to reproduce. And, not that they cared, their house needed a little jazzing up to show them off better to visitors.

“The project wasn’t stringently defined as to what they wanted and exactly how they wanted it,” says Charlotte Low, now a senior. “It was important not to become stuck on one idea.”

The suggestions were simple and flexible: Add see-through netting that poses little harm to the birds so they can flit about and not worry about raccoons raiding their eggs. Consider a circular pump to make the pool self-cleaning. Replace the grass with a low-maintenance alternative so zookeepers intrude less frequently. Install mirrors to fool the flamingos into thinking they’re legion. Re-orient the employee entrance and create a larger window into the birds’ shelter. Paint the drab walls to highlight the flamingos’ bright plumage. And, evict the other birds.

The zoo is grateful for the free advice, hosting a lunch at the end of each semester at which students make formal presentations. Still, it isn’t always in a position to run with their polished ideas, which may be sent to professional contractors for cost bids that zoo officials then take to potential donors. Some student teams refine working concepts in subsequent semesters, but even final proposals may sit on the shelf unrealized. One director’s dream of introducing giraffes prompted a design for a new exhibit that included a wheelchair-accessible, interactive feeding area. In the end, the project foundered on insufficient funds and a change of leadership.

Ketchum encourages students to return more than once. Laurentius started as a sophomore on the tamarin project, part of a larger South American exhibit that has yet to be finished. But she takes great pride in how the research has already led to the creation of the 10-species tree farm.

“I love the feeling of being able to help an organization that works so hard to make a safe and inviting place for the animals as well as the visitors,” she says. “Whenever I visit the zoo, I can look at the tree farm and know that I did something permanent that will hopefully enrich the zoo for years to come.”