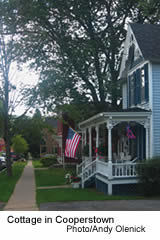 “Cities are cooperative human enterprises that exist to promote the best life possible for their citizens,” writes Philip Bess, Notre Dame professor of architecture. The list here is a pared-down version of what he gives students in his graduate Urban Design Studio—a formulation of principles commonly held by traditional urbanists. Many of these are implied in the “Charter of the New Urbanism,” available on the web at cnu.org/charter. Bess believes the moral, economic and environmental benefits of traditional urban neighborhoods are greatly influenced by certain formal features. Thus, he argues, a good neighborhood:

• Has a discernible center: for example, a public square or main street bordered by civic buildings, shops and/or residences

• Is pedestrian friendly, accommodating cars as well as those who want or need to walk

• Consists of a variety of dwelling types: for example, single-family homes, apartments above stores and coach houses, which together encourage a healthy economic diversity

• Has small blocks with a network of through-streets (as opposed to feeder roads and cul-de-sacs), generous sidewalks and broad planter strips for trees

• Utilizes its streets for parking, rather than building lots and garages visible from the street

• Reserves prominent sites for community monuments and civic buildings for education, religion, culture, sport and government, that front on public squares or terminate the ends of streets.

Bess and his fellow traditional urbanists point out that neighborhoods that meet this description—commonly found in cities, towns and villages built in the United States before 1945—are today illegal under postwar codes that zone by single uses and function to separate people by economic class. “New” urbanism, he says, is merely traditional urbanism in search of a level legal playing field. It has no interest in taking your car keys away, but if you live in a good neighborhood you may find your automobile is less a requirement than a pleasurable convenience.