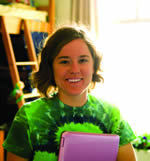 When Laura McCarty ’11 wishes everyone a happy Friday, she does it right on the edge. She’s delivered these greetings every week for more than three years.

It started with a Facebook message in February of her freshman year. Like most college students, McCarty rolls around YouTube on a regular basis. She found a clip of the song “Oh Happy Day” from Sister Act 2, which expressed her feelings as things wound down into the weekend. Eighteen people received that first Happy Friday message with a link to the video. McCarty sent a similar note the following week.

Then Lent set in, and the future theology and psychology major sacrificed Facebook for 40 days. So the early morning messages went to email. The result was a flowering ministry.

The receiving end of the Happy Friday Email began with friends from Celebration Choir and a Relay for Life team. From there, the list has grown to more than 300 people from all areas of her life: friends from McGlinn Hall, professors, Baraka Bouts teammates and others she’s met through campus ministry programs.

Given the diverse readership, McCarty starts off accessibly. She opens with a “Preludio” typical of her demeanor: unfailingly earnest, witty and focused on making people happy. It might include a video clip from a favorite movie like The Lion King, and segue, somehow, into a rant about TI-89 graphing calculators. The Preludio and her own comic reflections prepare readers for heavier matters. You can’t just start throwing theology at people, she explains. The goofiness eases them into the mood.

The “Heart of the Email” is where things get serious — in topic if not in tone. McCarty’s matter-of-fact language puts a digestible spin on spiritual discussions about belief, acceptance and choice. McCarty says the topics usually grow out of conversations she’s had at Notre Dame.

“It’s whatever has been on my mind that week or whatever I feel like I’m supposed to write about for people,” she says. “It’s grown as I’ve grown, too.”

She doesn’t request feedback, though when she does get a reply she says it brightens her day — even when it criticizes her interpretation of theology.

“People call me out, and I want people to do that,” she says. “It starts a discussion, and I’m really very grateful when that happens. It’s very humbling.”

McCarty is humble enough on her own, even without the critiques. She doesn’t allow herself to take too much credit for the sheer number of words she’s generated. She says a lot of the writing, especially the Heart of the Email, just comes organically from things she’s learned.

McCarty backs up each quasi-homily with her studies. She’ll often hunt down a quote or two to jump-start her meditation. C.S. Lewis, G.K. Chesterton and Saint Augustine inform many essays, which most weeks run about 700 words.

She devotes at least a few hours each week to composing the messages and has written as many as 10 in advance. The emails went out even during the three summers she spent without her computer at the Bay Cliff Health Camp for children with physical disabilities in Michigan’s Upper Peninsula. She left the essays and contact list with a friend and headed north.

Degree in hand, McCarty will spend one more summer at the camp and return to her hometown of Knoxville, Tennessee, where she’ll prepare for occupational therapy school and live a “quieter life” for a year. She plans to keep writing Happy Friday Emails as long as she can, partly as a way to stay connected to the people she met at Notre Dame.

When she feels it has run its course, she’ll let it go. As for publishing, McCarty is wary of dealing with the hubbub of copyright. An email is more personal, she explains. No one has to navigate a website or buy a book. It just pops into inboxes with an ecstatic greeting but no obligation to respond or even read it.

“I just think of it as tossing pennies in a fountain,” she says. “I relinquish ownership of it.”