Editor's Note: Normally, Matt Cashore '94's contributions to this magazine are more visual than textual. But when he came to us with this tale from the 2018 football season, we thought we'd let him try his hand at storytelling with words instead of photos. Enjoy this rare look behind the lens.

I’ve said it for years.

I can’t remember when I first uttered or wrote the thought publicly, but dive deep enough into my Twitter and I’m sure I’ve mentioned it there more than once: Kevin McDougal '94 is my favorite Notre Dame football player ever. 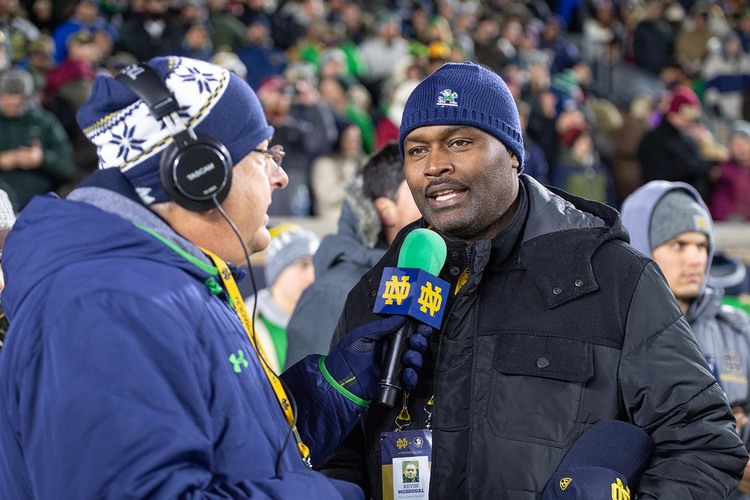 Why? He’s a classmate, for one thing. I don’t think we ever met in our student days, though, so the rest of my esteem comes from his on-field performance as the unheralded and expectation-exceeding leader of the 1993 team. For three years, he had patiently waited his turn, backing up eventual first-round draft pick Rick Mirer — but when the time had seemingly come in McDougal’s senior year, coach Lou Holtz publicly passed him over, giving the starting quarterback job to the much-celebrated incoming freshman Ron Powlus before the season even began. Injury put Kevin McDougal in the starting slot anyway, and he led ND to a nearly perfect season, beating Florida State in the “Game of the Century” along the way.

In my opinion, Lou Holtz never seemed to give McDougal the credit he deserved. Had I been in McDougal’s situation, I must reluctantly confess I probably wouldn’t have had a “team player” attitude, but McDougal did — instead of seeking a transfer or complaining, he got the job done and set a bar that wasn’t exceeded for nearly two decades.

Now, all of that said, when I’m on the sidelines of a football field I am capital-W Working. I am not remotely in fan mode. I don’t get giddy from a win or troubled by a loss, and I certainly don’t engage with the star athletes or other celebrities with whom I sometimes share a sideline. Autographs? Selfies? Please! I’m a professional.

In addition to stating many times who my favorite player is, I have also said many times that, if I ever saw Kevin McDougal in person, I would ask for a selfie. It seemed like a pretty remote threat to my mid-game professionalism — in the past two and a half decades, McDougal had seemingly left Notre Dame behind, steering clear of games and choosing like many Floridians before him to stay away from northern Indiana.

This season’s Notre Dame-Florida State game took place 25 years almost to the day after the 1993 “Game of the Century.” Appropriately, members of the 1993 team were invited back for an on-field recognition during the game. What were the chances Kevin McDougal would join them?

I listen to a radio broadcast of the action during games to keep on top of any “big picture” moments to photograph —a player on pace to break a record, etc — and to my surprise and delight, in the middle of the Florida State broadcast I heard Jack Nolan doing a live interview with none other than Kevin McDougal. I spotted Jack and, abandoning all professional decorum, sprinted over, introduced myself to McDougal and proceeded to gush and babble like, well, a fan. (To envision the moment, think Chris Farley in that Saturday Night Live skit: “Remember that time when . . .?!? That was awesome!”)  Kevin was kind enough to make a little chit-chat and make my day.

A former teammate grabbed McDougal’s attention before I could make too much of a fool of myself, and our brief interaction was over — but, for the first time in my 27 years covering Notre Dame football, I got my selfie! 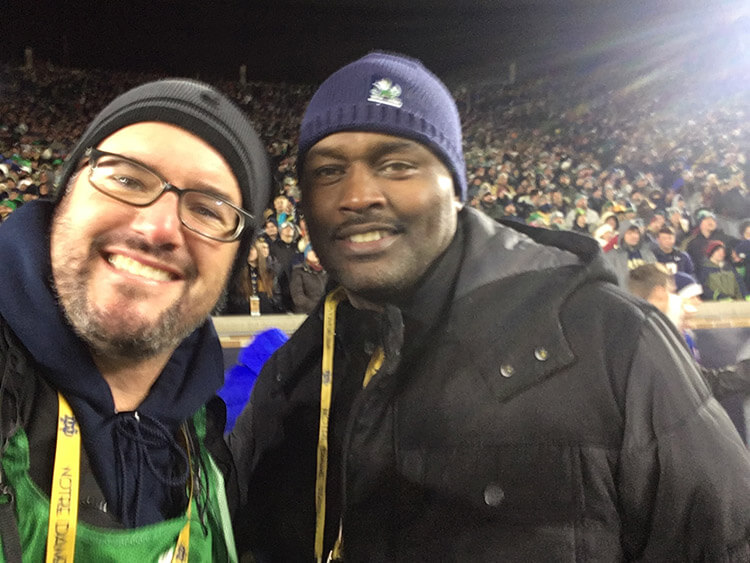 Matt Cashore is one of Notre Dame's University photographers and a regular contributor to this magazine.