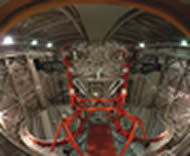 To the untutored eye the picture looks like a bunch of pencil dots and black blobs on a piece a paper with one faint dot circled in the center. To Peter Garnavich, who knows better, the image means the new $120 million Large Binocular Telescope (LBT) atop Arizona’s 10,700-foot Mount Graham will work as well or even better than scientists had hoped.

The faint dot, labeled GRB 070125, is the afterglow image of a gamma ray burst that exploded more than 7 billion years ago. It was observed last February 21 by a team of astronomers led by the Notre Dame astrophysicist and is the first scientific data collected by the telescope, which will be the most powerful on the planet when fully operational later this year.

The LBT (pictured here), which was built by a consortium that includes scientists from Notre Dame, the universities of Arizona, Ohio State, Virginia and Minnesota, and institutions in Italy and Germany. It uses twin 8.4-meter honeycomb mirrors, allowing it to resolve images with the sharpness of a 23-meter telescope. In its first scientific test, the telescope detected a source 100 million times fainter than the ability of a human eye to see. That feat bodes well for the future since Garnavich’s team made their observation using only the telescope’s “left side” primary mirror.