The binder is blue with gold lettering, a standard office supply found in bulk at Notre Dame’s bookstore, but the letters inside are what make it precious for Frank Connolly, professor emeritus of mathematics. That is because inside the binder are two decades worth of love letters. 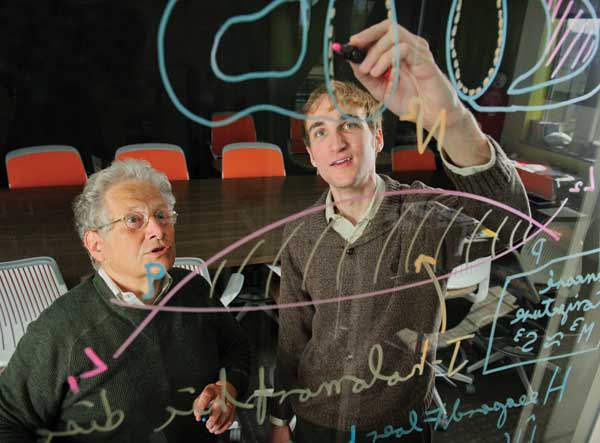 Not love letters in the romantic sense; they are notes written by students on the occasion of Connolly’s retirement last fall, each a snowflake collecting into a drift of appreciation.

“By asking us to puzzle things out and teach each other, he empowered us to find our own way through the material. . . .”

“Frank’s most valuable quality as a teacher was believing in his students even more than they believed in themselves. . . .”

“I am forever indebted to him for the gift of his time, encouragement, and support. . . .”

“He expected a lot from me, and his expectations have helped me to achieve what I have. . . .”

At Notre Dame, teacher-student bonds are likeliest to form over classes devoted to big questions, like debating the existence of God or the ethics of a business decision or a political policy. What makes Connolly’s binder remarkable — at least to anyone who lives each day in fear of numbers — is that all of these relationships were fashioned through math.

Connolly is the founder of a program that revolutionized and continues to transform mathematics at Notre Dame: the Seminar for Undergraduate Mathematical Research. SUMR, as it is known, integrates high-level course work into an undergraduate student’s life and work.

In 1989, the year he singlehandedly began the program, a report had criticized the University because almost no mathematics students had moved on to graduate school in the field for a decade. In the 24 years since, SUMR can boast more than 45 national fellowships and scholarships, as well as more than 60 students awarded or pursuing doctorates and 60 graduates admitted to a top-25 graduate program in the mathematical sciences.

Connolly, who plans to stay involved in the running of the program even in retirement, certainly finds satisfaction in changing students’ lives. But he is also gratified by seeing his efforts inspire students to pursue math and try to make their own discoveries.

“It’s part of being a mathematician to increase mathematical knowledge by your own creation,” he says.

Connolly arrived at Notre Dame in 1971 from Pennsylvania’s Haverford College. Over the course of his first two decades at the university he began to see how, despite attracting great students, Notre Dame was not preparing them for top-flight careers in the field.

“It galled me to me to see the higher places in mathematics only occupied by the Harvard, Princeton, MIT kids,” he says.

So he thought, “Why can’t this be done at Notre Dame?”

In a logistical sense, SUMR is an extension of Notre Dame’s honors mathematics major — a “super honors” program, in Connolly’s words. Invitations are extended annually to committed sophomore honors math students who have achieved mainly As and A-minuses in their math courses. The program acts as a crucible for burgeoning math talent — over the rest of their careers at Notre Dame, students will take graduate-level courses and complete a senior thesis, among other requirements, all aiming to challenge and increase the aptitude of the participants.

Alexander Hahn ’68M.S., ’70Ph.D., a math professor and director of the honors program in the College of Science at Notre Dame, says he made an effort to “shine some light” on SUMR during his term as the department chair from 1996 to 2000. He describes the math seminar as “one of the most significant contributions that a single individual has made in the history of this department.

“The remarkable thing about it is nobody really knew that he was doing it,” Hahn says. “[Connolly] continued; he persisted.”

Hahn says Connolly’s career is doubly impressive because he was simultaneously building topology, one of the most challenging areas of math, into a research strength at Notre Dame. Topology is, very basically, the study of surfaces in three or more dimensions — and what stays the same when you introduce a distortion. To use one common example, since a donut could be twisted, stretched and reshaped into a coffee cup, the two are, from a topological view, the same thing.

SUMR, though, is an area where Connolly’s impact will be felt exponentially, Hahn says, for each student he sends to graduate schools could then help develop other students, and so on.

Connolly’s life in math began more than 50 years ago. It was 1958, about a year after the Soviets launched Sputnik, and Connolly, a Fordham University sophomore, sat in his room late into the night. The physics major, one of seven children from a Staten Island family and a first-generation college student, had been raised by his parents to understand the value of an education — that it was everything, beyond wealth itself.

But as he sat near a sleeping roommate and listened to the rumbling of a train, he started asking himself, “What am I good for?” Despite the patriotic associations of physics in vogue at the time, Connolly says he found it dull and uninspired.

He then jumped out of his chair at the realization that maybe math, and not physics, could be his future.

“It was just smooth after that,” he says.

When Connolly talks about math, he talks about it the way others discuss poetry — in his estimation, a good analogy.

“Mathematics is beyond nature,” he says. “You get this perfection of form that you couldn’t have glimpsed before you understood it. . . . You sometimes gasp.”

As a teacher, one of Connolly’s most important tasks is revealing this elegance to his students, who often do not anticipate math’s appeal.

“Overwhelmingly, the reason [students] approach mathematics is because of its beauty. It’s a love affair,” he says. “They find that it’s really very charming.”

There is also what he describes as the “drama of seeing the formative years of a student.”

One of the students to be mentored by Connolly was MurphyKate Montee ’13. Earlier this year Montee received a Churchill Scholarship to study at the University of Cambridge. She followed Andrew Manion ’09 as the second Notre Dame and Connolly student to win the prize. Perhaps more impressive for the math and voice double major, among many other awards and scholarships, was becoming the first Notre Dame student to win the Alice T. Schafer Mathematics Prize, awarded to a U.S. female undergraduate student for excellence in math.

“Professor Connolly has done everything for me,” Montee says. “He knows what he’s doing. He cares about his students.”

Montee, who says she has been “a math nerd for a long time,” was looking at such schools as MIT before picking Notre Dame but believes she would not have thrived as much at other institutions because professors would not have put the same emphasis on undergraduate education.

“I’ve had a really good year,” she says. “I would not have had this year or this success without [SUMR].”

The young scholar talks about how methodical Connolly was in class, his keen perception at knowing whether she truly understood a concept or was faking it, and his skill at mentally nudging her along a path so learning was more discovery than pedantry. From Montee’s resume alone, it is clear how much her Notre Dame education has already blossomed into worldly success.

But there is a hint of something deeper than the compliments, and it shows when Montee talks about math itself, seemingly on the verge of tears of appreciation. Here is a discipline that starts with the most basic of assumptions, such as x+y = y+x, that can eventually lead one to an entire branch of mathematics, like calculus. Eventually, Montee says, you move beyond aesthetics. Just as an architect sees a building as not just a collection of bricks and steel and concrete but also as a result of rules and vision that go beyond simplistic form and function, she sees math as more than numbers.

“At some point, math turns into a lot of amazing patterns,” she says. “They become beautiful.”

Montee believes it takes maturity to reach that point in mathematics, maturity that can be earned at Notre Dame. It takes a guide; someone who has taken his own journey, say, from late New York nights filled with the rumbles of trains to grasping the structure of the universe; someone like Frank Connolly, who can stand within its architecture and point to each pillar and buttress so students can discover a new world for themselves.

Liam Farrell is the alumni editor of this magazine.