Many people can relate to the feelings Notre Dame evokes in our family. But Notre Dame touches lives in ways that some will never understand. It is almost a mystery in itself. Perhaps that is what the Blessed Mother intends. 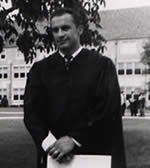 For our family, Notre Dame is a place and an idea of comfort, of familiarity. When I was young, my father, Frederick Walter Jamroz Jr., pictured left, would take us to church on Sunday at Notre Dame. Can you imagine four young children actually wanting to go to church on Sunday? That’s what Notre Dame does. We lived in southern Michigan, but we have a history at the university, dating back to the late 1800s. My mother’s great-great-grandparents are buried at Cedar Grove. As a youngster I was awed by the place: The basilica where one received communion in the hand long before it was common; being able to wander behind the sanctuary and see the relics of the church; feeding the ducks, the baby chicks at Easter Time; visiting the bookstore.

This is a story about a young man who joined the Air Force and served in the Korean War so he could go to school. A man who planned to go to Notre Dame. Fred Jamroz was a teacher, a coach, a father and a collector of souls. He was born in 1930 in Chicopee, Massachusetts. I have often heard him described as “the most Christian man I know.”

Fred prayed to the Blessed Mother while in Korea. He vowed that if he returned home safe that he would dedicate his life to teaching in the Catholic schools. That is exactly what he did. Fred could have made much more money during his career at a public institution, but he was dedicated to the Catholic schools.

After his discharge from the Air Force, Fred boarded a train for South Bend. He arrived with a suitcase, stored it in a locker at the train station and walked to Notre Dame. Rudy could have been his story. He was a walk-on for the football team, and he wrestled. After an injury, he was not able to play football anymore. Still, football was his life. He coached high school football and was named Coach of the Year by the Michigan Athletic Association for taking his team to the finals.

Fred attended church every morning at Notre Dame while going to school. It was in South Bend that he met and married his best friend, Rosemarie Hagye, whose family also loved Notre Dame. Her father, Frank Hagye, as a youngster would stand outside the gates of the stadium, watching the fans and players. On several occasions one of the players filing by would pick him up and carry him into the stadium.

Many years later he would be a caretaker for that field, lining the field prior to the home games. He used to tell my father, “How many people do you know that have their work on national television?” The Blessed Mother brought this family together. In 1960 Fred graduated from Notre Dame. By then he was married and had his first son, Christopher, who would go on to graduate from Notre Dame in 1983.

Moving on
Fast forward to 2003. I am Fred’s daughter, a nurse who lived in Kansas for 15 years. I had thought about moving home to Michigan for many years, to be near my parents, and decided in 2003 it was now or never, as my daughter, Amanda Garrett, was going to be a freshman in high school. She also was endowed with the Notre Dame spirit—it was part of a way to stay connected to home. We would watch Notre Dame sports and once went to see the basketball team play at Bartle Hall in Kansas City.

I did not know how we were going to manage a move. I visited home in early summer of 2003, and we stopped by Notre Dame. We were not well-to-do, and the thought of moving that distance was a bit overwhelming. At the Grotto. I lit a candle and said, word for word, “Okay, Blessed Mother, if I am supposed to move home, you are going to have to help me.”

So began a cascade of events that boggles the mind. Every part of the move fell into place—from the job, a place to live, help from friends in moving, having the money to move—within two months. We arrived back in Michigan in August. It was amazing.

Shortly after I moved, Dominican Sister Nancy Murray (the sister of Bill Murray, the comedian) gave a presentation at our church about Saint Catherine of Sienna. At my mother’s request, I took a picture of her with Sister Nancy. Mom explained that I was her daughter who had just moved from Kansas. Sister Nancy asked me what I did for a living. When I told her I was a nurse, she responded, “You will be a blessing to your parents.” I remember thinking , “Uh oh, I am in for something.” As she looked me in the eye, I knew that whatever the Lord held in store for me and my family, we would manage. I vowed to the Blessed Mother that I would do her bidding if She helped me.

It began for Fred, who was rarely sick, with knee problems. Perhaps it began years earlier with the aches my father documented in his journals. My father had been active all his life, coaching football, playing every sport there was. He tried out for a minor league baseball team as a young man and decided against signing when he felt the agent offering to represent him was shady. We finally talked him into going to the doctor, and I went with him to this and every following appointment. The orthopedist identified a problem with Fred’s gait and recommended he see a neurologist. From the local neurologist we went to the University of Michigan Hospital and then on to Mayo Clinic.

Even the doctors at Mayo could not give us a diagnosis. They did discover numerous congenital deformities along his spine, including severe scoliosis. By fall of 2004, Dad was using a walker and a wheelchair. Still, no one could figure out what was causing the muscle wasting, the weakness and, finally, the difficulty breathing. We never got a definitive diagnosis, but for all practical purposes, it was ALS (Lou Gehrig’s disease). In the spring of 2005 Dad got pneumonia and ended up on a ventilator. He was never able to be weaned off.

For the next two years my mother, my sister, Patty O’Strander, and I took care of Fred at home. We provided tube feedings six times a day, medicine many times a day, bathed and changed him, took care of the vent and did his physical therapy. I spent many days going to his home before and after work to administer IV antibiotics. About every third night, I slept on an air mattress next to his bed. I still worked full time, and my sister had just started a new job as a teacher. We both have children. Dad’s care consumed our lives. When I was overwhelmed, I would think about Sister Nancy and repeat what she had said to me: “You will be a blessing to your parents,” and I would find peace and strength.

My dad would never speak again due to his trach. We got him a laptop computer, and he used it to surf the net, write his memoirs and play solitaire. He always read The South Bend Tribune first, the sports page, of course. In one of his notes he wrote, “When I came home from the hospital I was worried, I didn’t know how my family was going to take care of me, I need not have worried.”

Always a fan
Dad still loved Notre Dame He insisted on wearing “The Shirt” for every football game. We had to alter them to fit around the tubing. He also received a number of things mysteriously in the mail. A fellow at church send him the Notre Dame football news. After being cornered for 15 seconds at a Georgia Tech game by a fellow ND fan with a press pass, Coach Charlie Weis sent Fred a get-well letter and an autographed picture. That letter and picture and subsequent letters from his office and the ND leprechaun did much to brighten the spirits of a man who was once so independent but could no longer do anything on his own.

Fred told us many times that his miracle was coming. A couple months before his death, I came home from work and to his house finding him elated. My mother said he had been that way all day. He finally communicated to us that it was because his miracle was coming. Since he was no longer able to write, we played a guessing game about who was bringing his miracle. After about five tries, I learned that the Blessed Mother was bringing his miracle. When I asked how he knew, he just smiled. Somehow I knew that meant she was coming to get him soon.

Two years earlier, the night he was put on a vent, I had said to God, “I am not finished with him yet.” I now was saying to God, “You gave us more time, and I know you want him now and its okay.”

Dad passed away on April 24, 2007. His younger son, Thomas Gerard, gave the eulogy. He had listened to the many stories my father told through the years, always containing a reference to God, His will and Mary. The funeral was perfect. We like to say he got in the last word. Since he was not able to speak for two years, it was a very big word. As I turned around during the sign of peace, I was struck by all the family and friends behind us, as if they were holding us up and had held us up the last several years.

Mom had selected “Notre Dame Our Mother” for the recessional song. A fitting tribute to a man who loved Notre Dame and more so loved the Blessed Mother. As we processed out of the church, the CD was supposed to loop through the song again. Somehow it reset itself, and on came a booming: “Welcome to Saturday afternoon football!” The Notre Dame Victory March began playing loudly and joyfully. It was uplifting and humorous, and for sure Fred Jamroz had the last word about his beloved Notre Dame. As he always finished every correspondence: God Bless, Go Irish!

Fred’s granddaughter, my daughter, now attends Saint Mary’s College and plays with the Notre Dame band. He never got to see her play there. When I first left Amanda on the Notre Dame campus for band camp, I looked to the Golden Dome, to the Lady I had been taught to put my faith in. I knew that She and my father would be watching over her.