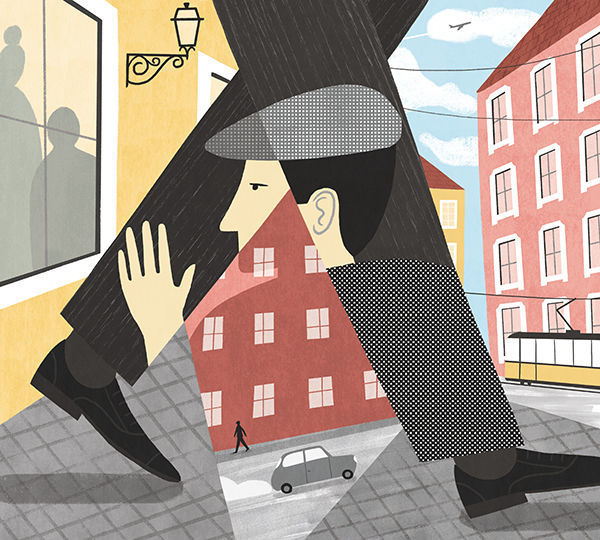 I was posted to the U.S. Embassy in Lisbon from 1970 to ’72, my first assignment in the Foreign Service. Most mornings I walked from my small apartment to the offices at the embassy, which was then near the center of town. The walk took about 25 minutes. The first three blocks were flat, the rest downhill along narrow, cobbled sidewalks with small, linked dwellings on my left and a busy city street on my right. If it rained, I took the San Francisco-style trolley that began and ended its route directly in front of my apartment.

During my first weeks in Lisbon, I noticed two people who were nearly always seated at the street-level window in one of the dwellings I passed as I began the downhill stretch of my walk. The window faced east and, even during the mild Lisbon winter, was splashed with sun. One of the window people was a woman of about 45, her dark hair arranged in a high wrap. She had large, almond eyes and a broad, strong-featured, pretty face. A garment the women of my childhood had called a house dress cloaked her form. Her expression was tight-lipped and grave.

The second person was a boy, probably between 9 and 12 years old. He had black hair, a round, scrubbed face and a stocky frame. He was always neatly dressed and wore a different shirt every day. He had a sweet, beguiling smile. He was obviously well-loved. He had Down syndrome.

One morning the boy and I made eye contact. He smiled and waved. I responded in kind. On subsequent workday mornings, we developed a ritual. He would await my passing. His silent greetings grew in intensity. I often paused a moment or two to extend and elaborate the exchanges. The woman’s face remained serious, although once or twice I thought I detected the hint of a smile. Their window always remained shut, presumably against car fumes and Lisbon’s intolerably noisy motorbikes.

I seldom returned from work along that route. Often there were evening embassy functions to attend. I signed up for Portuguese literature classes at the university. I never saw the woman and boy around the neighborhood, not in the colorful market where I shopped on Saturdays, not at the local church where I attended Sunday Mass. On the few occasions I passed the window at times other than those weekday mornings, the woman and boy were absent.

In July 1971 I traveled to New York for two weeks to attend my brother’s wedding. I feared the boy might miss our morning charades and felt guilty that I had not thought to warn the woman I would be away. I bought him a present, a New York Yankees baseball cap. American baseball team hats are ubiquitous now, but in 1971 Lisbon, they were still an exotic rarity.

The first workday back in Lisbon, the boy was more enthusiastic than ever. He appeared beside himself with joy. I showed the paper bag with the hat to the woman and pointed to the door that was to my left of the window, signaling with gestures that I wanted to talk. She opened the door, slowly and tentatively, shooing the trailing boy back to his place. I gave her the hat, explaining its origins. I said that it was a present and that perhaps it could protect her son’s eyes from the glare of the morning sun. She accepted it, graciously but with reserve, saying formally, Muito obrigada — “Thank you very much.” She then said, “We knew you were a foreigner,” and gently closed the door. I had called the boy her “son,” without knowing if that was the case. She did not contradict me.

For the rest of my time in Lisbon, the ritual continued, broken only by the odd rainy day or my short trips out of town. The pair at the window seldom missed a day. To my mild annoyance, I never again saw the hat.

I asked a Portuguese friend whether there were official provisions for kids with Down syndrome. She said she knew several institutes and that perhaps the pair was expecting a school van when I passed. Or maybe they were waiting for rush-hour traffic to subside before making their way to a special school. My friend, a gentle, thoughtful soul, reflected that, in a way, parents with such children were blessed: They would always have their children near. The boys would be exempt from military service and could not be sent to the colonial wars in Angola, Mozambique and Guinea-Bissau. And neither boys nor girls would have to travel abroad to find work, something many young Portuguese were then obliged to do.

In 1972, the week before I was to depart Lisbon permanently, I knocked on the door to inform the woman that I was leaving. She thanked me for telling her, saying she would advise her son later. I was almost relieved she did not offer to bring him for an in-person goodbye. To my pleasant surprise, she said she knew he would miss our morning exchanges. She then smiled broadly, for the first and only time: “Your mother will be so happy.” I did not say that I was going to Brazil and would be flying directly Lisbon to Rio early the following week.

The final exchange of smiles and gestures with the boy was, for me, a sad one. He was as happy and lively as ever. I spent my last three or four days in Portugal in a downtown hotel. I did not again see the window-sitters.

I visited Lisbon as a tourist in 2018. The old neighborhood was much the same, but a construction site had taken the place of the small, contiguous dwellings that had housed the window-sitters. A new multistory condo was being built. Whatever happened to the sprightly boy whose name I never knew, and, to my shame, never learned?  I hope he has had a happy life. His solemn, loving mother would now be in her 90s. I hope her life was happy as well.

John Treacy retired from the U.S. Foreign Service in 1999 after 30 years’ service in Europe, Latin America and Africa. His son, Sean, is a 1998 alumnus of Notre Dame.